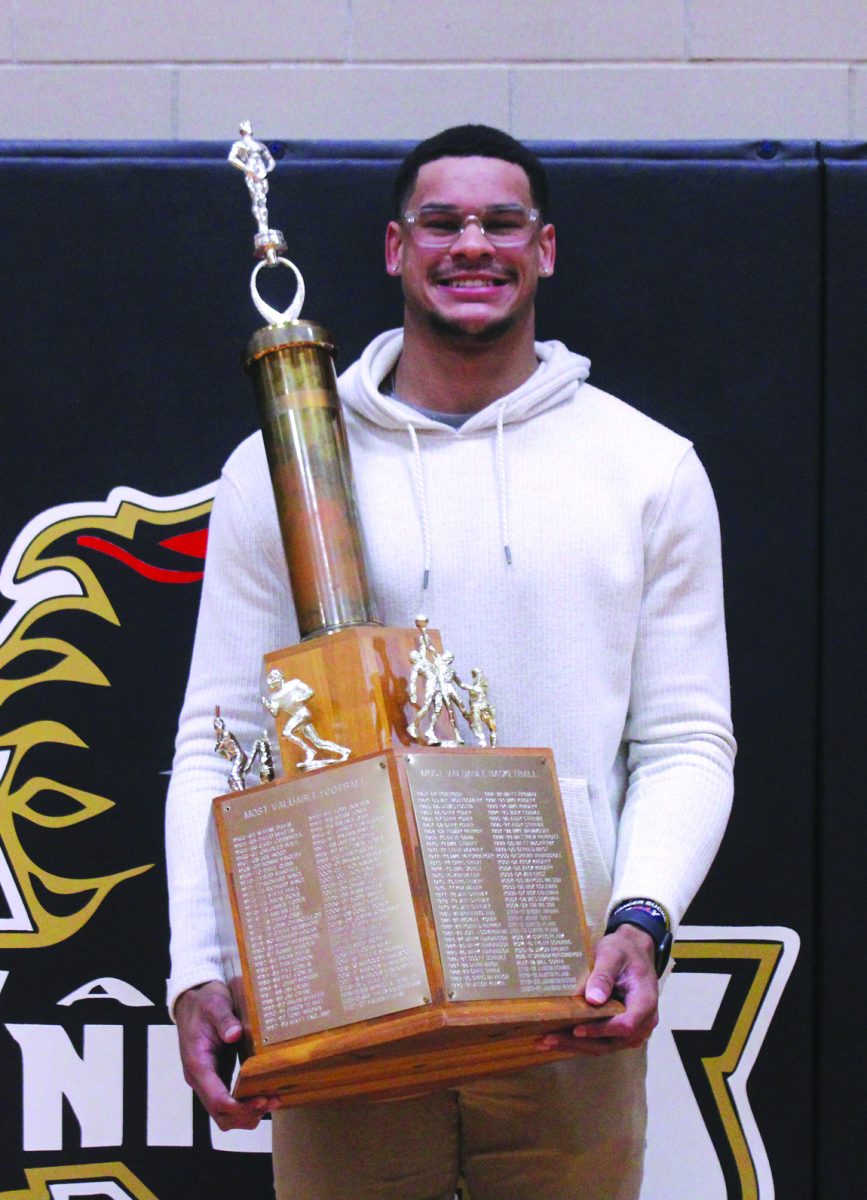 Kaden Feagin holds the Boys’ Most Valuable Player Trophy as he was selected ALAH Football MVP for the third consecutive year. 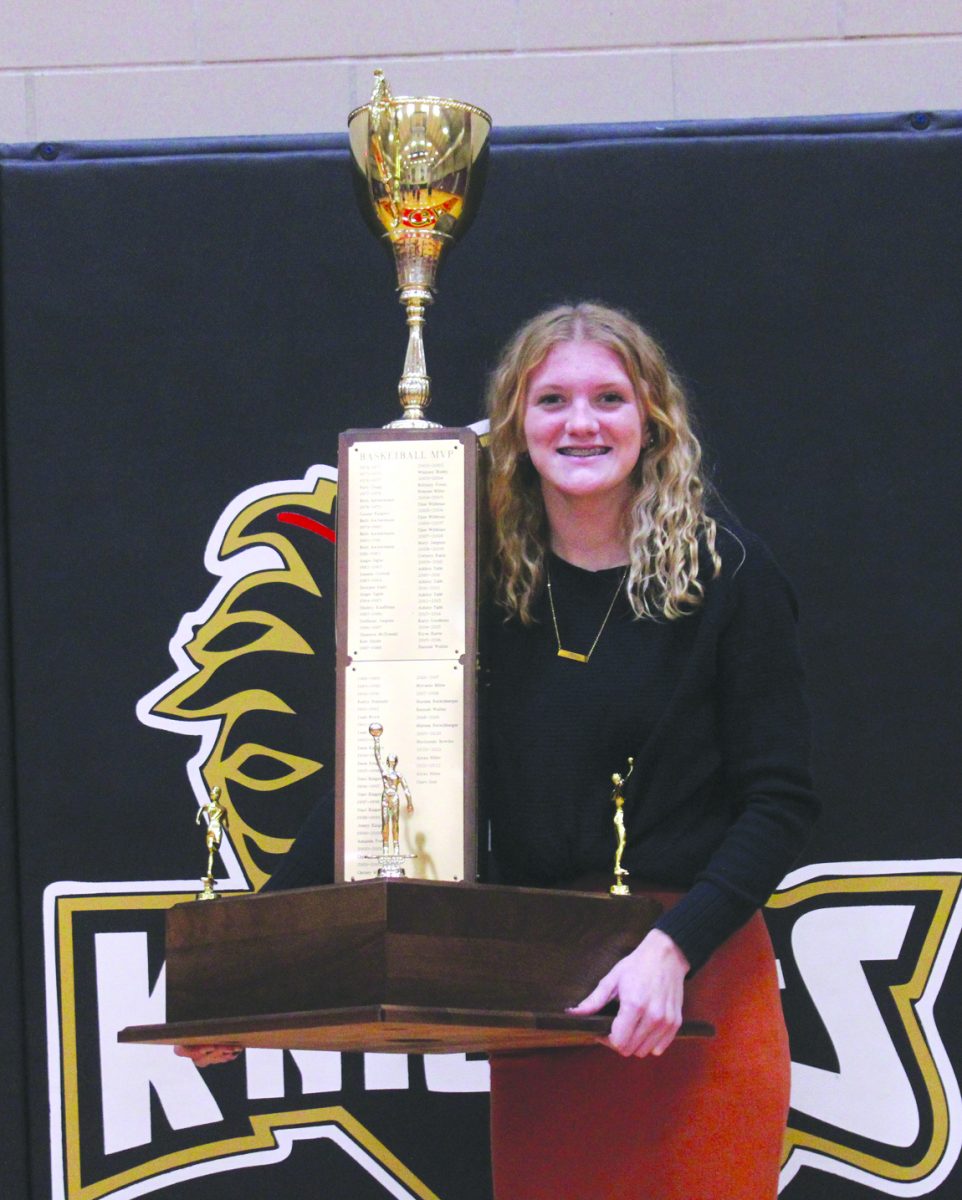 Alisha Frederick was chosen as the MVP of the ALAH Knights Volleyball team. 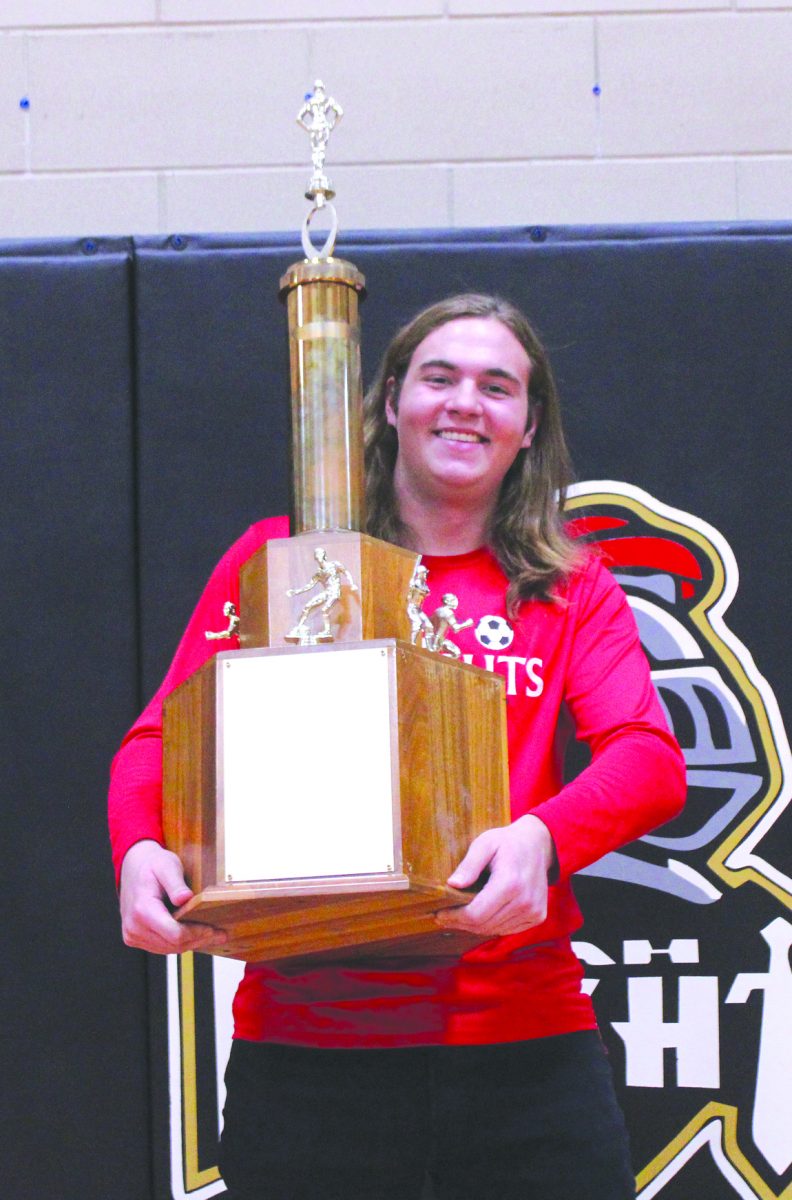 Levi Ward was selected as the Most Valuable Player for the ALAH Soccer team this season. 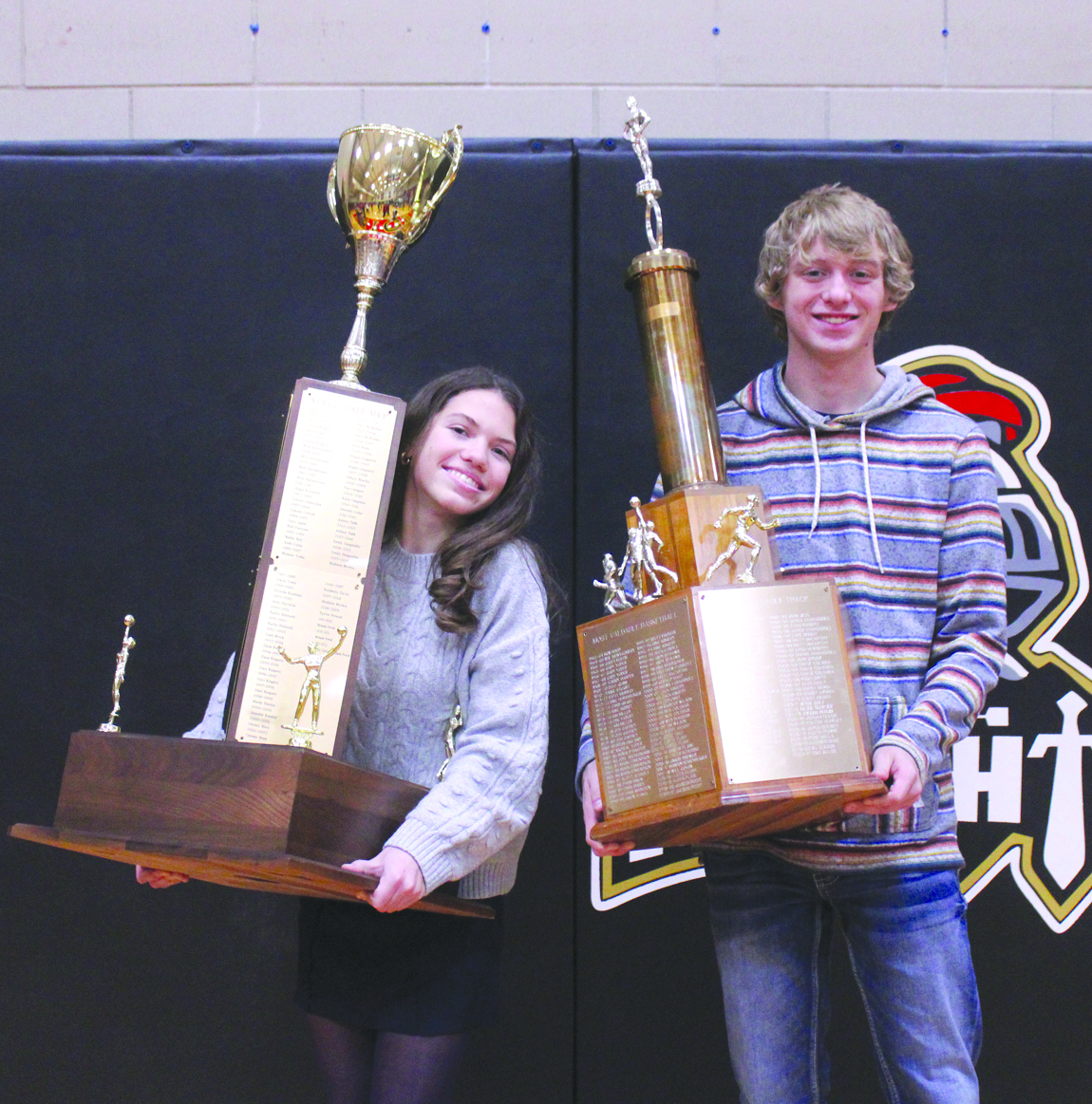 The ALAH Cross Country MVP awards went to Ruby Burton for the girls and Logan Beckmier for the boys.

The 2022 Arthur Lovington Atwood Hammond Annual Fall Sports Award night was held on Friday, November 18 at the high school. ALAH Athletic Director Nathan Seal opened the evening with this to say: “Good evening and welcome to the 2022 fall awards night.  This was a very tough fall season for athletics at ALAH.  At this point, you might be thinking to yourself what planet is this guy from.  Tough?  What do you mean tough?  You would be right if you are looking at the results of our athletic programs for this fall.  We had great success in athletics both at the team and individual levels.  Tonight allows us an opportunity to recognize all of these accomplishments.  However, we did have a tough season.  In August, I shared with our coaches at our coaches meeting something I had found from Tallulah Falls School that I would like to share with all of you tonight.

Toughness is enhanced by making choices in the moment for the greater good, for the team above self, for the long term before immediate satisfaction. Choosing quality, sacrificing the unimportant, setting appropriate priorities to pursue worthy goals, contributing to the life of the team, and creating and fulfilling roles all require tough decisions. Tough is not rough, it is not selfish, it is not inconsiderate, it is not arrogant.  Instead, toughness creates significant connections from a genuine, deep, active sense of GREAT. It unites a team, rallies a community, provides a positive competitive environment and enhances the individual growth of our student-athletes.

We want each team from junior high to high school to directly structure and plan for the practical, daily, and lasting influence of being GREAT by developing toughness in practice, in games, and in life by choosing with conviction the greater good.

Everyone on every roster should develop a team role, measurable responsibilities, and assessable growth. We want to connect with each other, with the skills and strategies that inspire excellent performance, with officials who professionally govern our contests, with our community by serving, and even with peer opponents in a respectful manner.

“Be Tough” is meant to be a cue, an accountability reminder, a rallying call, a process and a quest in all that we do this year as we continue to seek to Be GREAT!

I hope now you can see why I say we had a tough fall season here at ALAH.  Time and time again I witnessed our student-athletes united as a team and our communities rally behind our teams.  I watched our student-athletes fill their individual roles on the team and choose the team before themselves.   Each of us in this gym tonight should feel a great sense of Knight Pride in what we have accomplished so far this year and be determined to show our toughness throughout the winter and spring seasons.”

Before we recognize our student-athletes, I would like to offer some special thanks to several individuals. . . . Katherine Dams – Athletic Trainer – she spends a lot of time here taking care of injuries and working to get our athletes back on the field as quickly as possible, the high school faculty and Board of Education for their support of our athletic programs. Mrs. Schrock, Mrs. Martinez, and Mrs. Seegmiller in the high school office, they anticipate the needs of the teams and coaches, and always do whatever they can to help the athletic programs,  Miller Transportation for getting us to games and practices, Mrs. McGrath, Mrs. Creek, and Mr. Cheek in the unit office for their assistance,  all local media outlets including:  The Arthur Graphic-Clarion, News Progress, New-Gazette, Herald and Review, WCIA and WAND for their coverage of our programs, Athletic Booster Club for continued generous support of our athletic programs, all of the individuals that work behind the scenes to help make our athletic contests successful: our scorebook keepers, clock operators, sideline crews, those that play music, and our announcers for all of our sports, custodial and maintenance staff for preparing the fields and the gym for our events.

Thanks again to our parents for supporting our student athletes and coaches throughout the season.

Each of the fall coaches were then introduced to say a little about their seasons and to give their Knight Awards. Each coach decides the criteria for that award for their sport.

First up was Coach Brad McGill of the A/ALAH golf team. The golf team was conference champions for the fourth season in a row and had a 47-9 record in Invites, matches where there were multiple teams competing. Their match record was 16-2 including a regular season undefeated conference record. Coach McGill also mentioned that Braden Kauffman was the golf team MVP but was unable to attend the awards night.

Coach Dorjahn said it was an interesting season with highs and lows. Illness and injury played a role and the girls’ team who were leary at first finally figured out what cross country was about by the end of the season. He mentioned that the Knights boys’ team are the only ones to have won the LPC meet as they secured their fourth consecutive conference title this year and the girls took second for the third year in a row.

Coach Dorjahn then introduced his four senior athletes in attendance and spoke about their success, three regional, two sectional, and two state runners up championships, and have won every major invite at one time or another in the course of their four years in high school.

Coach Dorjahn then presented his Knight Awards to Emma Edwards for the girls, stating that she was the “mama bear” of the team, very supportive of all the team members and was the third fastest girls’ cross country runner in ALAH history; and for the boys the award went to the Adcock brothers, Jacob and Lyle who were the anchors in the program for four years and were good students and tremendous teammates.

Coach Dorjahn introduced Coach Patrick Lindstrom to speak about the ALAH soccer team. He talked about “how the team grew together, and even though there were rocky moments they stayed strong. They played even up with their competition, had a no quit attitude, held their heads high, and forced other teams to earn every point they got.” The best game of the season ended in a tie and in the second round regional game, with only 10 players, they held the Hilltoppers out of the goal for 32 minutes of the first half and 22 of the second.

Coach Lindstrom then gave his Knight Award; that goes to the player that has pride, commitment, leadership, knowledge of the game and helps his teammates, to Levi Ward.

Up next was Cheer Coach Misty Appleby who began by asking if everyone knew the saying “put your money where your mouth is?” and went on to explain how that was how she ended up becoming Cheer Coach. She said “it was the best decision she ever made!” She had 14 girls and 1 boy on the squad and they had the attitude of we can do it and showed it by supporting our school to the best of their abilities. They did an amazing job from tryouts last spring, through cheer camp, Kiddie Camp, by giving 110%. She also stated that the parents were amazing!

Coach Appleby thanked her assistants Brittany Bartley and Lori Jefferson for all their help and they were a great support for her.

Volleyball was the next sport up and Coach Emily Crossman began by saying there were 29 girls on the teams this year and they were able to have three teams, Fresh/Soph, JV and Varsity. The Fresh/Soph group showed growth and progress in the understanding of the game; the JV finished with a record of 11-7 and took almost all of their matches to 3 games, challenged the varsity in practice and showed focus, dedication and determination; the Varsity team was a dream to coach! She said “she looked forward to practice and game days were like Christmas morning!” The Varsity set a new win record of 30 eclipsing the old mark of 26 set in 2016. The girls were focused on enjoying the games, were driven and goofy! They worked hard but knew how to have fun also.

Coach Crossman gave her criteria for the Knight Award as a dedicated, hard worker, puts team first, has a true love for the game, is a selfless leader and the fiercest competitor and that player this season was Alisha Frederick.

The final coach to speak was Head Football Coach Ryan Jefferson. He talked about the goals the team had at the beginning of the season and that they accomplished some, winning a playoff game, hosting a playoff game and beating Arcola! There were a couple, a conference championship and advancing farther in the playoffs that weren’t met but they can go for those next year.

He mentioned the two regular season losses but said those served a purpose-the team stepped up and began to get better weekly in practice and had a six game win streak as a result. The Johnston City playoff game showed how far they came, that despite adversity we played with them into the fourth quarter. They proved that the next person up, whoever is out there can get the job done.

Coach Jefferson stated he is excited about the juniors and the underclassmen for next year, mentioning that the JV team had a record of 6-2 and we will be in good shape going into next season.

Coach’s Knight Award uses the principles of Knight Pride-Heart, Faith and Class. The person who received the award showed a lot of growth over his four years and that person was Kody Kornewald.

After the Coaches spoke Mr. Seal went back to the podium to recognize the student-athletes that received all conference and all district recognition.

Congratulations to all of our all-conference, all-sectional, and all-state award winners!

After the All Conference and All District certificates were handed out the different sports went to separate locations to give out their team awards.