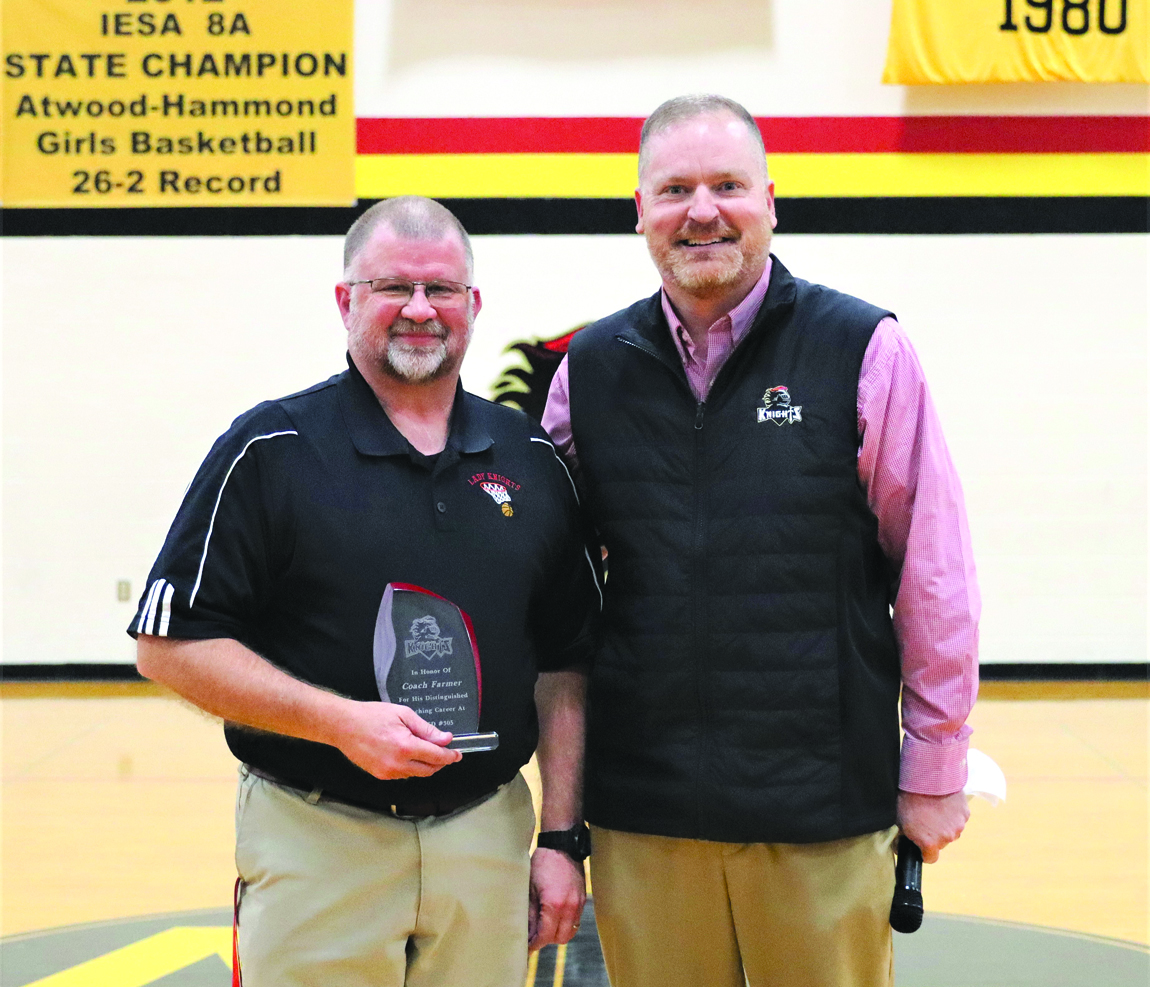 END OF AN ERA. Coach Lynn Farmer pictured with ALAH Athletic Director Nathan Seal as he was honored during his final home game of his career.

Arthur Lovington Atwood Hammond Junior High girls’ basketball program will undergo a leadership change as 25-year veteran head coach Lynn Farmer will retire from coaching as the 2022 season comes to a close. Farmer steps away from a program that he has to date guided to 381 victories during his tenure.

Several former players, ALAH staff and administration along with his family were in attendance Tuesday, November 15 as he coached his final home game adding two more victories to the win column as they defeated the Shelbyville Rams. Farmer was presented with an impressive award, a signed basketball with his final record to be added, and other gifts from the current teams.

Farmer came to Atwood-Hammond in 1999 after a two-year stint in Shelbyville. During his time on the Chargers/Knights sideline, Farmer has led the program to multiple conference championships, regional, and sectional wins along with Back-To-Back State Championships in 2011 (undefeated) and 2012.

“Coach Farmer has had a very successful and distinguished coaching career at Atwood Hammond/ALAH.    More importantly than all of the successes that his teams have had over the years is the impact that he has had on his players,” ALAH athletic director Nathan Seal said.

“Thank you for your unwavering dedication and passion for the game.  Thank you for never ever giving up on players, even when they maybe wanted to give up on themselves.  Thank you for pushing your teams to do better.   Thank you for being the kind of coach that makes people want to be part of the team.  Most of all, thank you Coach Farmer, for making your girls better both on and off the court.  Under your guidance, your girls not only learned the game of basketball, but countless other life skills.  You taught your teams that it’s not just about winning or losing, but about working hard and playing fair.”

Seal concluded, “Thank you and your family for your time, dedication, and efforts to the girls basketball program at Arthur Lovington Atwood Hammond.   You have made a difference in the lives of all you have coached, and we wish you the best in your retirement.”

Former player Liz Shipman who played on the 2011-2013 teams under Farmer told the packed house, “There are hundreds of things I can say about coach, basketball, and all our memories. Coach Farmer was more than just basketball to a lot of us.

“Most importantly he taught us all to love the game of basketball. I think I can speak for everyone by saying we are so grateful to have had someone like coach Farmer in our lives,” she concluded.

Despite stepping away from coaching, Farmer will continue in his role as a physical education teacher at AHGS.

Coach Farmer stated, “I think retirement might be an overstatement.  I am just closing this chapter of my life.  I will make a decision later this year on when I will retire from teaching.  I am part of a girls travel basketball program that I will continue to coach.  I currently have two granddaughters that I plan to spend time with, not to mention my wife, Rachel of nearly 30 years that I will get to spend time with.  My son and his family live out of state, so I might spend some time on a plane going there more frequently.”

When asked what else has stood out in your coaching career besides two state championships he replied, ”This run has been really great!  The players and families that I have had the privilege to work with have been amazing.  I really appreciate the former players that took time out of their busy lives to come back for my final home game.  That made it very special!