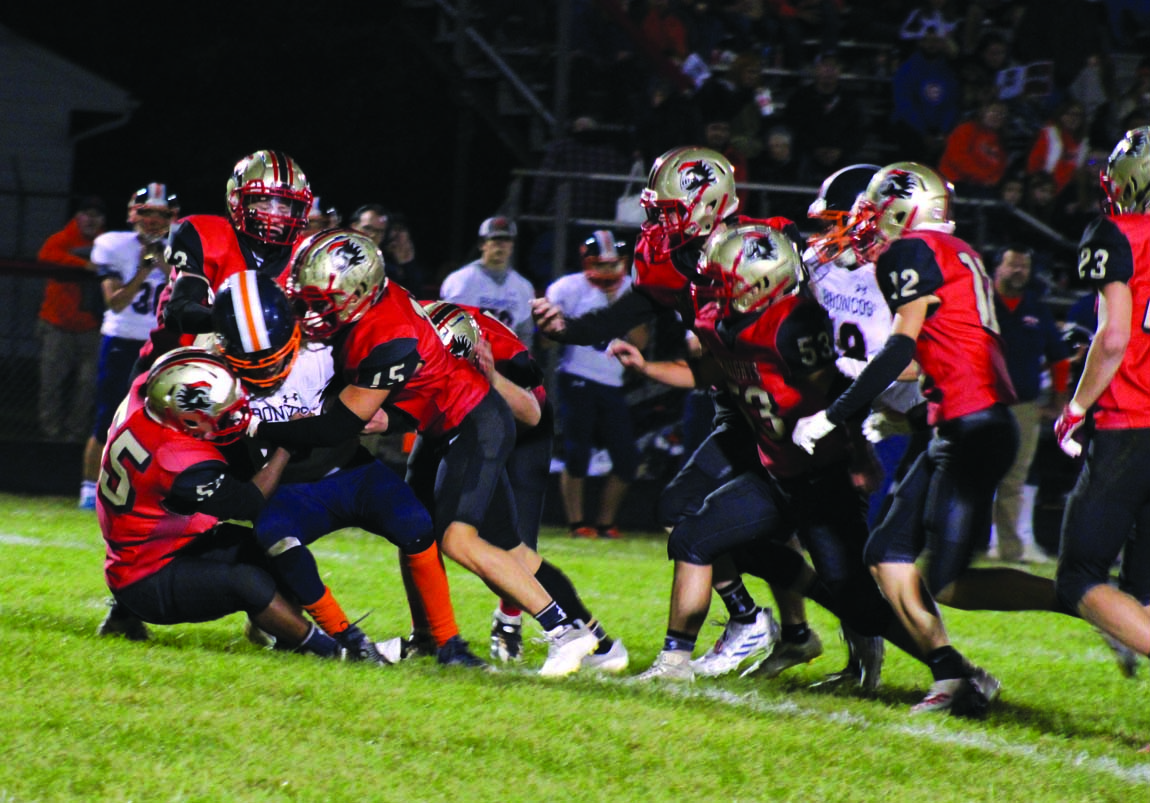 #55 Mit Appleby takes down the Bronco running back in the game vs. CGB last Friday. Helping out on the tackle are #22 Alex Rexroad and #15 Noah Garrett. Other Knights are #53 Adam Morgan, #12 Connor Nettles, and #23 Landon Waldrop. Mit tied for the team lead in tackles with Noah with 9.

The Arthur Lovington Atwood Hammond defense led the way and the offense took advantage of their play in the first half of the home game with the Cerro Gordo Bement Broncos on September 30. Just like in the game last week the Knights scored quickly and often.

On the third play of the game Knights safety Kaden Feagin picked off a pass by Bronco quarterback Caleb Weaver and returned the pick 36 yards for a touchdown to put ALAH on the board first. Chilton Ingram kicked the first of his 9 extra-point kicks and the home team led 7-0 with 10:22 left in the first quarter.

The Knights would score on each of their next six offensive series in the first half.

Feagin would score his second td on a 36 yard run after a CGB punt. After another interception, this time by the Knights Drew Cotton that he took to the Bronco’s 3. Mason Allen would take the ball into the end zone. That would end the scoring for the red, black and gold in the first quarter with ALAH leading 21-0.

The second quarter would see the Knights have four possessions and score on each of them. After the defense stopped CGB on a fourth down play, Kaden Feagin would get the first touchdown in the second on a 65 yard run. Again a Bronco turnover, a fumble recovered by ALAH’s Kody Kornewald, turned into a Knights score, this time Jayce Parsons took the ball in from 15 yards out. Parsons would then make a big defensive play, picking off another Bronco pass. That pick would result in a 9 yard touchdown run for Mason Allen’s second td in the game. Parsons had one more score for himself after CGB turned the ball over on another fumble that was recovered by ALAH’s Drew Cotton. This time it was a 36 yard run by Parsons and with Ingram being perfect on all his EP kicks the score at the half was 49-0 in favor of the home team.

The second half would be played with a running clock and both teams had two series, one each in the third and fourth quarters.

ALAH received the third quarter kick but the second team offense was forced to punt. A bad snap saw the Knights punter Landon Waldrop take off with the ball and turn it into a 56 yard touchdown. The Knights back up offense would put together a drive in the fourth that ended with Alex Rexroad scoring on a 22 yard run. Ingram’s kick gave the Knights 63 points in the game.

CGB tacked on a touchdown with 15 seconds left, making the final score 63-8 and put the Knights record at 4-2 on the season.

Next week is Homecoming at ALAH and they will face the Arcola Purple Riders on Friday, October 7 at 7:30 p.m. Everyone needs to come out and cheer the Knights on in one of their biggest games of the year!!

PATS – Chilton Ingram, 9 for 9 (100%) **We are pretty confident that Chilton now either “holds” or at the very least, “shares” this as a record, making 9 out of 9 PATs in one game. Arthur, Arthur-Lovington, and ALAH programs have had some great kickers in the past. Congrats Chilton!