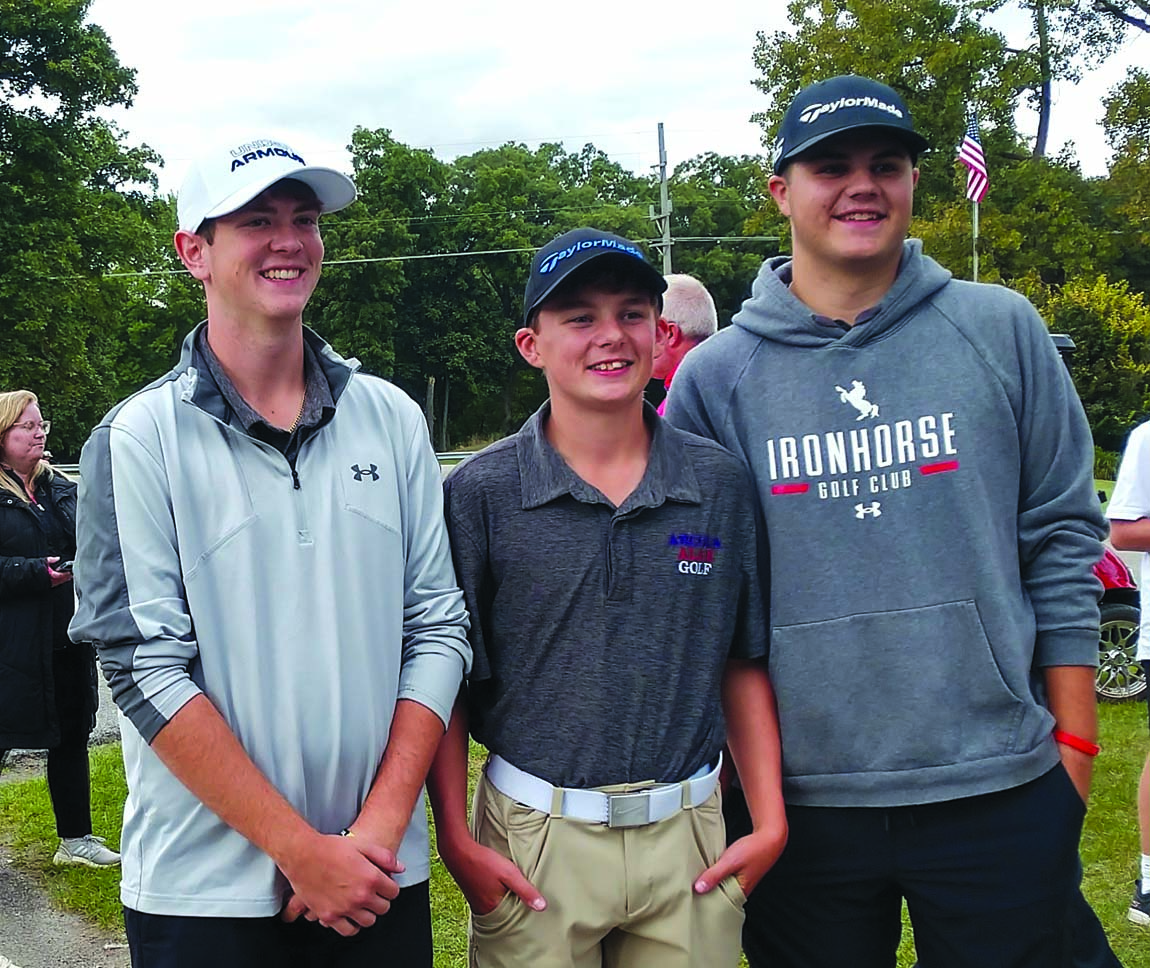 Braden Kauffman, Craig Wesch and Aaron Seegmiller advanced to the Class 2A boys golf sectional at Waterloo. The top 10 individuals not on an advancing team moved on to state. Photo by Mike Monahan

CHARLESTON – The Class 2A boys golf sectional didn’t get off to a great start as it was delayed for the first 30 minutes due to frost at the Charleston Country Club. After that the Arcola/Arthur Lovington Atwood Hammond team finished the holes in fourth with a 342, nine strokes behind the third place and final team advancing, Olney.

Although the team didn’t advance, three individuals made their appearance in the Waterloo Sectional Monday. Among the top 10 individuals not on an advancing team were Braden Kauffman, Canton Wesch and Aaron Seegmiller who shot 18 hole rounds of 81, 82 and 84 respectively.

“We felt good about our top three coming in,” said Arcola coach Geg Gisinger, who is assisted by Brad McGill. “I don’t think any of them played their best as it was pretty windy and the greens were fast. We knew it would be tough for us to go as a team.

We were ranked fifth going in and finished fourth (15 strokes ahead of Mt. Zion). Overall, I am pretty happy with the way we played. We just wanted to be a little bit better to get the team to advance.”

As for the individuals, Gisinger said, “They knew they had a good enough game to make it to sectionals. Canton held his nerves pretty well. I am glad those guys can help Canton as it is his first time in high school. The senior leadership is great (Kauffman, Seegmiler, Clay Seal, Brady Moore, Nolan Schrock). It is good to mix a couple of seniors and a freshman. I am really happy for Aaron and Braden and Canton. They have good years.”

Seal finished his career with a 95.

Kauffman, Wesch and Seegmiller were among the top three for the Knight-Riders all season.

“There is a lot of competition among teammates,” said Wesch. “We are all really tight in the one, two and three spots.”

Last year Wesch participated in the Illinois Elementary School Association state golf meet at Metamora Field and was 47th overall with an 88.

Wesch’s best nine holes this season is a 36. His best 18 is a 79 on the very same Charleston Country Club course.

“I had a pretty mediacore day, but it was good enough to get the job done,” said Wesch. “I enjoyed it.”

Wesch finished with a bogey on the 302 yard par four hole.

“My second shot wasn’t that great (ended up in a gully short of the green),” said Wesch. “I had to get up there (to the green) and I got to within 10 feet. I have been working on going to the sectionals for the last five years and it has been so good to finally have it come true.”

Wesch said the strength of his game is his iron and short games.

“I need to work on my drives a little bit,” said Wesch. “I have been pretty consistent overall.”

Kauffman’s best nine holes this year is a 37 and his best 18 is a 75 shot Sept. 30 at the Stan Adkins Invitational in Charleston.

“My strength today was my putting as I made a lot of puts that a lot of people probably would not make. My approach shots were another key to my game. It means a lot to move on to the sectionals. It means a lot to come in here and get it done. I am trying to make it to state (Friday and Saturday at Weibring Golf Club in Normal).

As for the course Kauffman said, “I like it. It is a nice course. I had a 75 at the invite (Sept. 30). Today was just different as there was more pressure and it was really cold in the morning.”

Kauffman and Seegmiller were in the sectional last season, finishing at sectionals with an 82 and an 88 respectively.

The course, according to Seemiller, is tougher on the back nine, which is where he started.