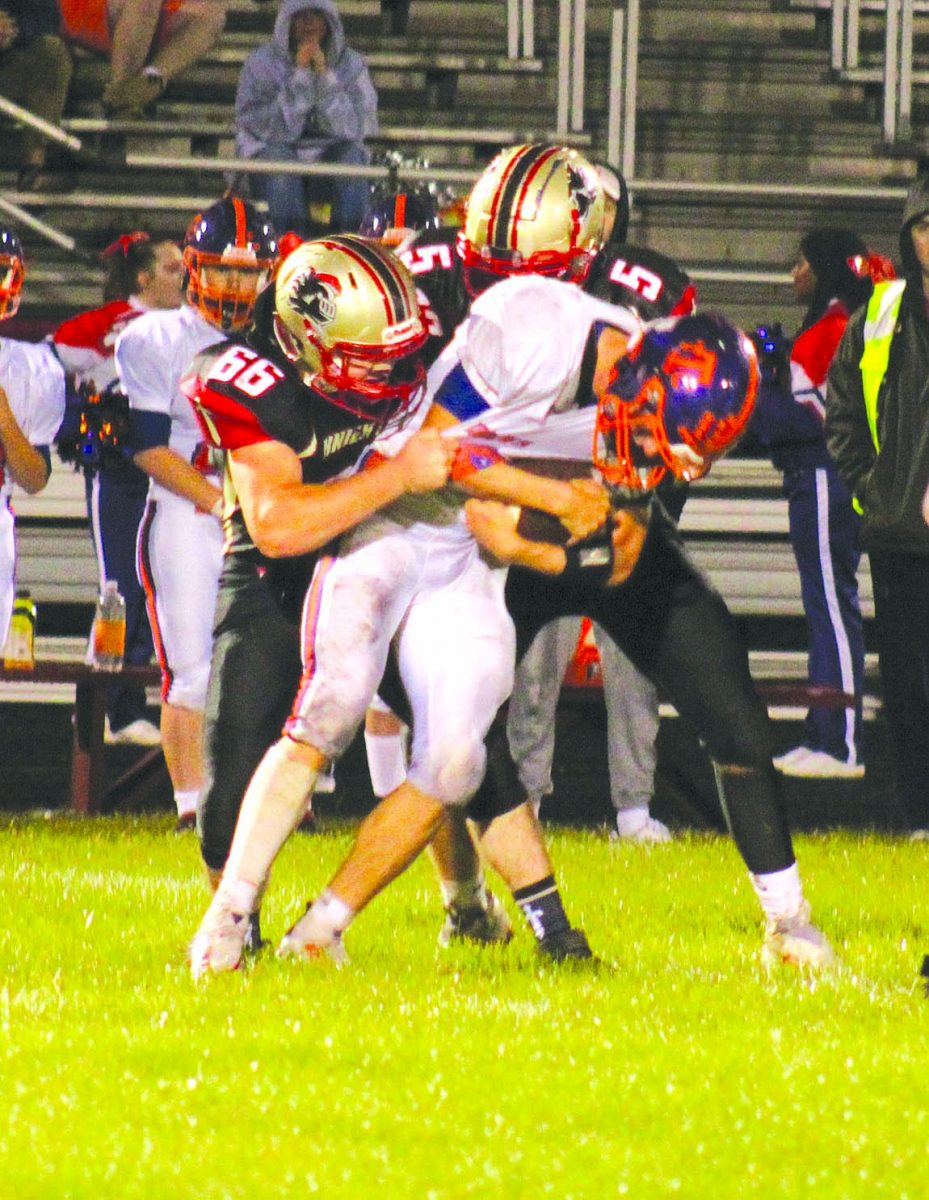 #66 Tanner Beckmier and #5 Drew Cotton take down the Titan runner in the victory over the Tri-County Titans last Friday. Drew led the team with 14 tackles while Tanner tied teammate Kaden Feagin for second most tackles with 11.

With a steady rain falling throughout the football game last Friday, the Arthur Lovington Atwood Hammond Knights scored early and often in the Lincoln Prairie Conference game with the Tri-County Titans. The Knights were sporting their new all black uniforms for the game.

After ALAH senior offensive lineman Kody Kornewald recovered a fumble on the Titan’s first possession, the Knights would score on the first play of each of their first four offensive series in the first half.

The first score right after the fumble recovery was a 30 yard run by Knights quarterback Kaden Feagin. Chilton Ingram kicked the extra point and the red, black and gold were up 7-0 at the 10:16 mark of the first quarter.

After a Tri-County punt Feagin would handle a bad snap and take it 75 yards to the end zone for his second score in the game. Kaden was once again over 100 yards rushing in the game with only 2 carries this week. Ingram’s kick made the score 14-0 with 5:38 left in the first.

For their next series, TC turned the ball over on downs and this time running back Landon Waldrop scored on a 47 yard run on the first play. 21-0 was the lead after Ingram was again successful on the EP kick with 3:01 still remaining in the first.

The Knights’ defense forced a punt on the visitor’s next possession and on the first play for the home offense, Jayce Parsons scored on a 79 yard run just a minute and forty-eight seconds into the second quarter. Ingram’s kick gave the home team a 28-0 lead.

Parsons would get the ball back from the Titans with an interception of Tri-County quarterback Garrett Pollock on their next series with 7:51 to go in the first half.

The Knights’ longest drive of the half, a total of seven plays, would result in a 1 yard touchdown run by Parsons. In the drive, Mason Allen picked up 30 yards on two plays and Waldrop rushed for another 60 on two carries. Ingram would kick another EP and the Knights led at the half 35-0.

Mason Allen, senior running back for ALAH would open up the second half and finish the scoring for the Knights with a 52 yard touchdown run just 52 seconds into the third quarter. Ingram would be perfect on his extra-point kicks and at 42-0 the rest of the game would be played with a running clock.

Tri-County did score on a 2 yard run by Tyler VonLanken in the third. The 2 point conversion was stopped by ALAH and the score was 42-6 with 39.3 seconds left in the third.

The Knights had one other series in the second half but had to punt. Tri-County had possession as the clock ran out to end the game.

The Knights would like to thank everyone who came out in the nasty weather to support them throughout the entire game. As Coach Jefferson said “thanks to all who braved the weather, especially the cheerleaders who kept leading the crowd and doing those 146 jumping jacks in the rain!!”

The victory gives ALAH a 3-2 record overall and a 2-1 record in the conference. Next Friday, September 30 will see another Lincoln Prairie Conference opponent, as the Cerro Gordo Bement Broncos come to Wilson Field for a 7 p.m. contest.