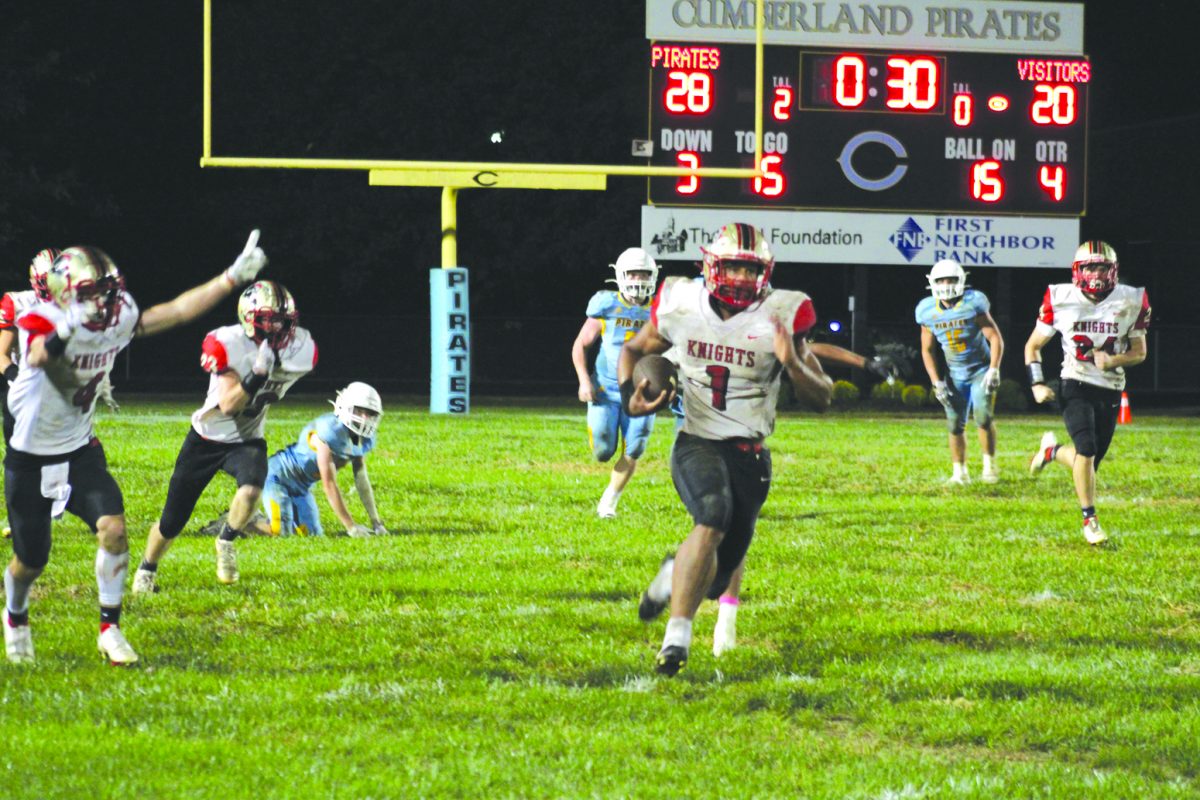 With the clock showing the time remaining in the game with Cumberland Kaden Feagin runs down the field 85 yards for a touchdown. #4 Jayce Parsons celebrates as Kaden runs by and #23 Landon Waldrop and #24 Mason Allen follow Kaden. The td made the score 28-26 in favor of the Pirates and the Knights couldn’t get the two point conversion to tie the game.
Kaden had 29 carries for 256 yards and 4 touchdowns, was 4 for 10 for 43 yards and an interception. He also broke two all time Knight football records, rushing for 3,179 career yards and 41 rushing tds with five regular season games left in the season. Both records were held by Tyler Schuring, former A-L and ALAH standout (3,065 yards and 40 tds).

An 85 yard touchdown run by Arthur Lovington Atwood Hammond quarterback Kaden Feagin with 21 seconds left in the game almost gave the large crowd of fans who traveled to Cumberland High School an unforgettable finish. But after the td run the

Knights were down 2 points due to a blocked extra point earlier. Kaden tried to go up the middle for the extra point play but was stopped just short of tying the game and a possibility of overtime. Instead ALAH came up short 28-26 to even their season record at 2-2.

The game started with Cumberland jumping in front 7-0 on s 40 yard pass play from Pirate QB Bryant Weber to Trevin Magee and an EP kick by Michael Beaumont just a minute and a half into the game.

The Knights fumbled the ensuing kick return back to the Pirates and they looked to be threatening to add to the lead but they gave the ball right back to the Knights as Jayce Parsons recovered the Cumberland fumble.

Neither team could get anything going on offense in the rest of the first quarter but both teams scored in the second. Cumberland on another long pass to Magee and with the EP kick extended their lead to 14-0 with 8:22 left in the first half. ALAH put together a consistent drive and Feagin scored on a 21 yard quarterback keeper. With the extra point kick by Chilton Ingram the lead was cut in half at the 3:44 mark of the second. The Knight defense made some big stops on a goal line stand just before half stopping the Pirates three times from inside the five yard line.

In the third quarter, a Jayce Parsons interception led to ALAH scoring on a 1 yard run by Feagin. Ingram’s kick tied the game at 14 with 4:26 remaining in the third. Cumberland’s Magee scored his third td of the game with 28 seconds left in the third to put the home team back on top 21-14.

The Knights would score twice in the fourth to bring them close to a chance at victory but a pick six by the Pirate’s Ross McBride and a missed extra point by ALAH would be the difference in the game. Feagin scored the other 2 tds for the Knights on a 3 yard run and the aforementioned 85 yard run after a Cumberland missed field goal from the 15.

The Knights’ season record stands at 2-2 and 1-1 in the Lincoln Prairie Conference. They finally get back home to Wilson Field after three weeks on the road. They will play hosts to the Tri-County Titans on Friday, September 23 at 7 p.m. Come out and see this exciting team play and cheer for your Arthur Lovington Atwood Hammond Knights.