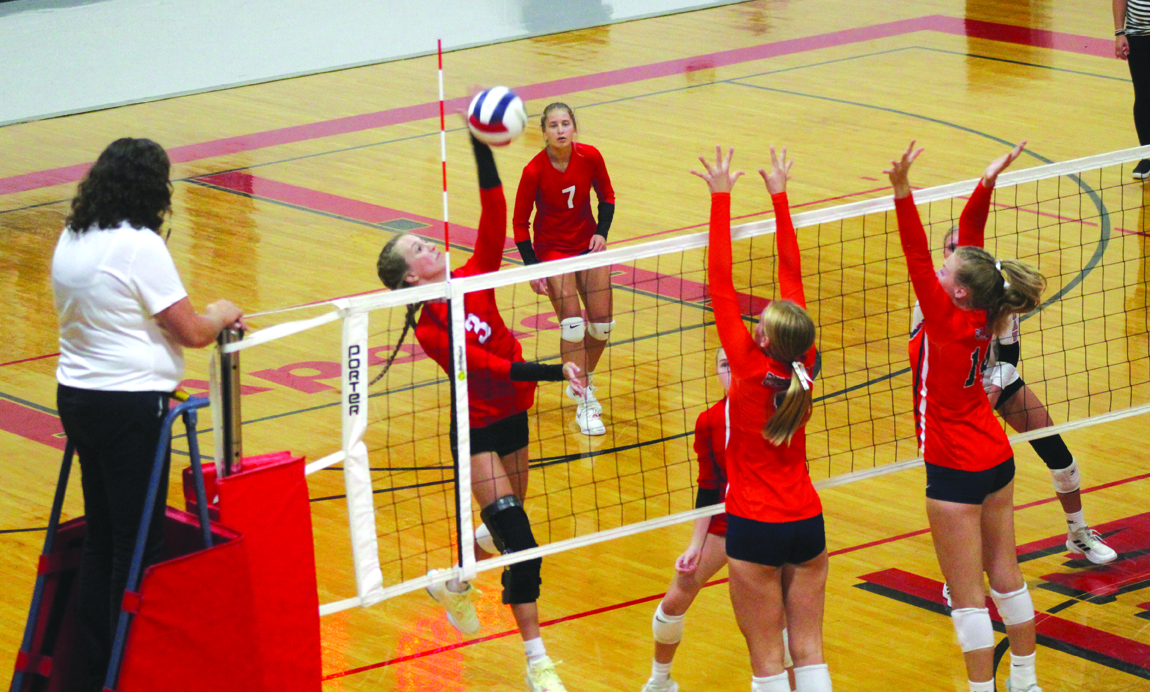 Alexis Smith makes a kill in a 2-1 loss against Mahomet-Seymour at home in Mt. Zion.

The Mt. Zion volleyball team went 1-1 last week picking up an Apollo conference win against Charleston and a conference loss against Mahomet-Seymour.

In the first set against Mahomet-Seymour, Alexis Smith started off the scoring for the Braves with a kill to give them a 1-0 lead. The Bulldogs scored twice and then Isabelle Holmes made a block to tie the set 2-2.

The Bulldogs took a three point lead after a couple Braves failed serves and a failed return. The Bravess then narrowed the lead to a 5-4 Bulldogs’ lead off failed returns.

The Braves started to take control of the second set when a failed return and Kallianna Becker scored an ace to take a 6-4 lead.

The Braves scored on four of the next six serves. The s Braves scored off Bulldogs’ failed returns and Madi Moore and Tayetum Flanigan both scored an ace for the Braves to take a 10-6 lead.

Late in the second set, the Bravess led 19-13. The Bulldogs scored on three of the next four possessions to narrow the score to 20-16.

The Bulldogs went on to take a 23-21 lead off a Libby Bodine ace. Denver Anderson then nailed three straight kills to make the score 24-24. The Bulldogs scored the final two points to win the set 26-24 and the match 2-0.

“I told them those plays make a huge difference on the volleyball court and literally sways the momentum shift,” Head coach Traci Dyer-Townsend said. “So be focused on doing your job and not like being in opposition, or not transitioning, because those couple plays affect the score. One of those points could have been going our way and the game would be totally different.”

The Braves are now 6-2 overall and 2-1 in Apollo conference play. This week the Braves will face Mattoon and Lincoln on the road. The focus in the practices for improvement for the Braves leading up will be on serving and blocking.

“We missed too many serves,” Coach Dyer-Townsend said. “Our blocking needs to continue to read players at the net and take away the oppositions’ offense.”