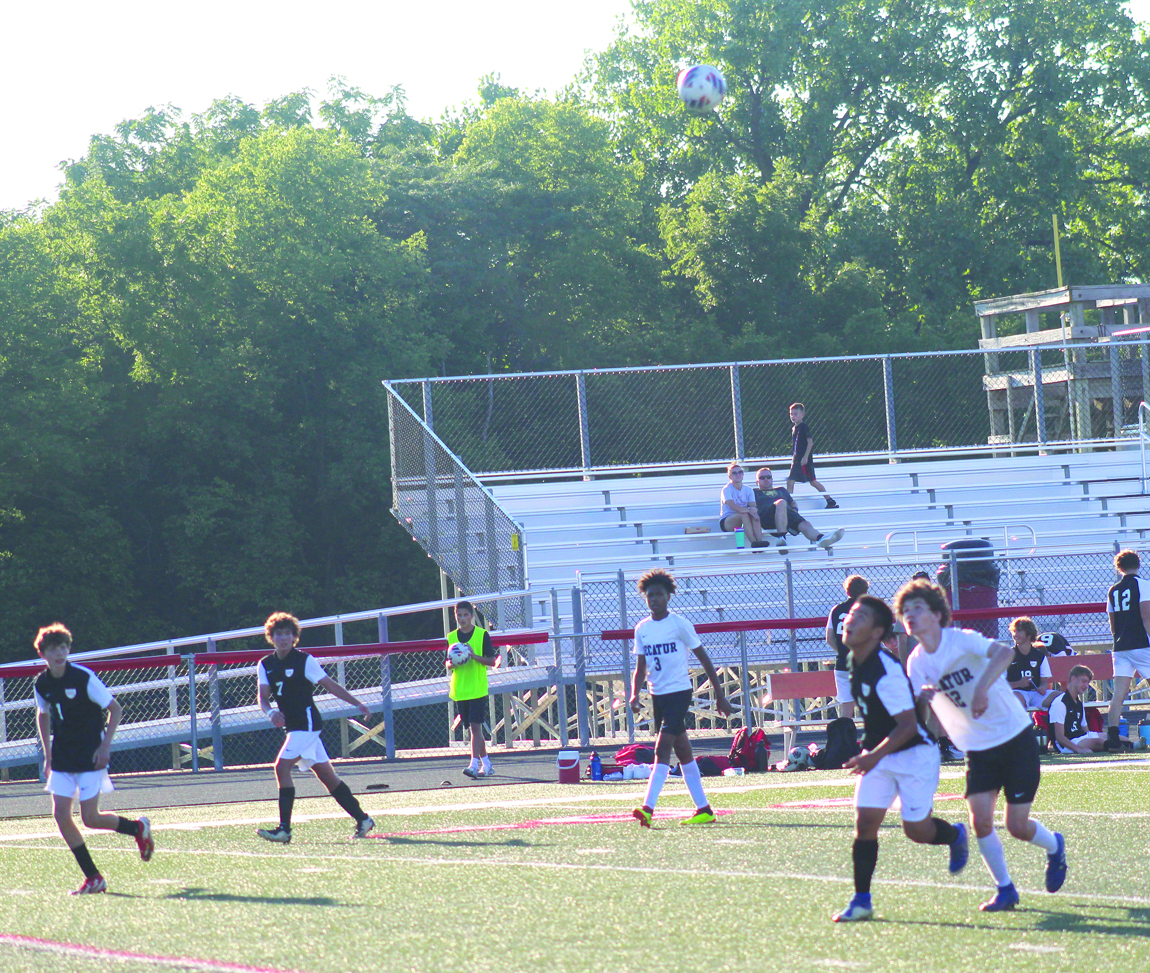 Thomas Konemaru battles for a header in a 9-0 win against Decatur MacArthur/Eisenhower at home in Mt. Zion.

The Mt. Zion boys soccer team went 3-1 last week. The Braves picked up wins against Taylorville, Decatur MacArthur/Eisenhower and Effingham. The lone loss came in a tough 3-1 loss against 2A N0. 2 ranked and N0.10 nationally ranked (According to MaxPreps) Champaign Central.

“I thought for us this was a huge, huge step for us,” Head coach Scott Crawford said. “We were organized offensively, we played smart, we communicated through the team, the way that this Central team played. They were really, really good. They moved the ball side to side. And we were patient. And defensively we were really good and I’m proud of that.”

The Braves came out and stunned the Maroon’s defense. Hayden Shumaker scored on a breakaway goal that he put into the top-shelf of the net to give the Braves a 1-0 lead in the second minute of the game.

“We Kind of looked to get behind them if we could, because we knew that they weren’t that good in the back row,” Coach Crawford said. “But as far as possessing the ball we struggled a little bit with that. I’d like to see more possession. Obviously, that helps us get out of the back and it helps us get a little more organized. But overall, I mean, the kids work hard. The work rate was hard. It was just well done.”

The goal gave the Braves momentum. The Maroons turned the ball over and we’re frustrated as a team. The Braves almost got two more gold, but failed to put the shots in the back of the net.

In the sixth minute, Ezra Bernhard scored to tie the game 1-1.

The Braves defensive core of Brayden Traxler, Carter Bahls and Matthew Platzbecker made key stops along with the help of goalkeeper Joshua Garrett. With 1:15 left in the first half, the Maroons offense attempted to score and Garrett made back to back saves to preserve the 1-1 tie going into the second half.

For 30 minutes in the second half, the Braves defensive core held on. Tracker made plays clearing the ball, Platzbecker contained offenders and headed the ball away and Bahls slide-tackled and controlled the ball to help preserve the tie.

“We were down a couple guys and without a center back,” Coach Crawford said. “It was a new group that played well for us and I think Carter Bahls just earned a spot as a center back. I think Brayden Traxler stepped up and played well and once we get Luke (Shumaker) back we will get stronger in the midfield and build on this.”

In the 55th minute, the Braves defense allowed a one on one opportunity for the Maroons. Garrett made another save for the Braves to keep the score 1-1. Garrett finished the game with eight saves.

The Maroons pressure opened up scoring opportunities that they eventually capitalized on in the 70th minute. Isaac Fisher shot the ball from the top of the 18 and scored to give the Maroons a 2-1 lead. Four minutes later, Diego Zarco found Cooper Carson for another goal that gave the Maroons a 3-1 lead.

The Braves continued to fight and almost narrowed the lead when Hayden Shumaker hit the cross-bar on a free-kick. The Braves fell 3-1.

The Braves improved to 5-4 overall and 2-1 in Apollo Conference play. The Braves face Williamsville, Lincoln and Mattoon this week.

“Just building off what we did and today is key for us,” Coach Crawford said. “We knew that we were going to be okay up front coming into the season and defensively it can be a struggle. But I think the defense today cleared the air and I think it’s going to help us a lot.”