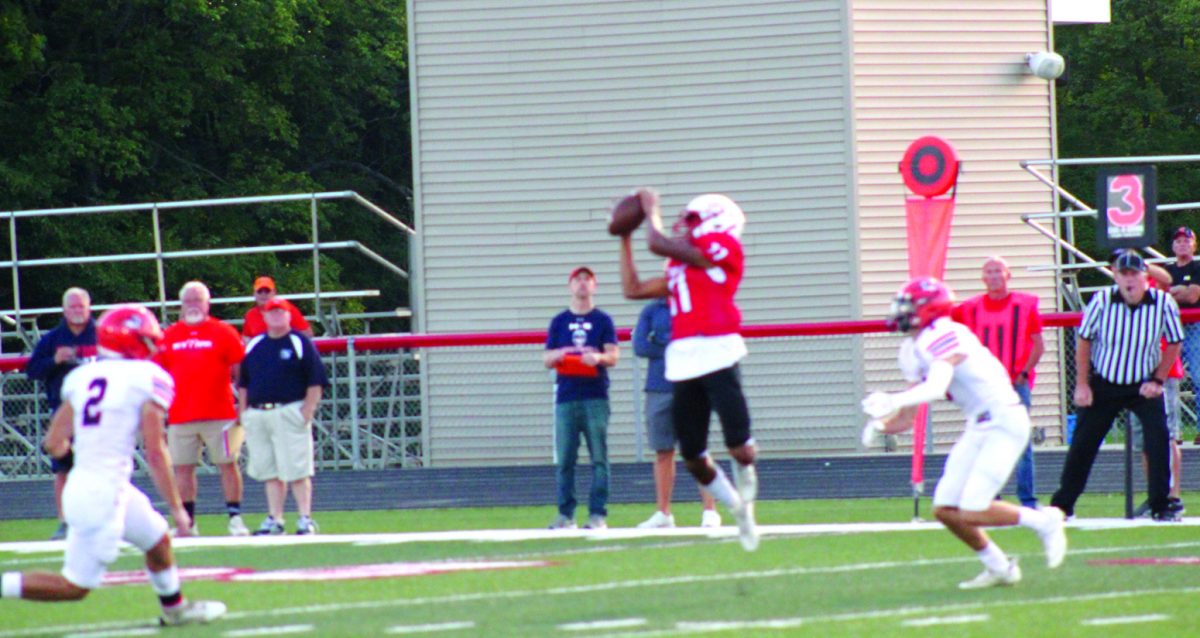 Brayden Trimble makes a catch in a 49-14 loss against Mahomet-Seymour at home in Mt. Zion.

The Mt. Zion football team lost to 5A N0. 4 ranked Mahomet-Seymour 49-14 in Apollo Conference action. Makobi Adams scored one rushing touchdown and threw a touchdown pass for the Braves.

On the opening drive, the Braves were stopped after six plays. On the punt, Mahomet-Seymour caught the ball and then fumbled a lateral that resulted in the Braves regaining possession on the 26-yard line.

The Braves failed to score on five plays and turned the ball over on downs. The Bulldogs took the ball up the field and gave the ball to Luke Johnson for a 13-yard touchdown run. Kyle Walmer nailed the extra point to give the Bulldogs a 7-0 lead.

The Braves regrouped on offense. Adams settled the offense and threw a seven-yard pass to JC Anderson for a first down. The next play, Adams threw a 42-yard pass to Jacob Harvey that put the Braves on the four-yard line.

On fourth down, Adams snuck the ball into the end zone for a one-yard rushing touchdown. Brayden Traxler nailed the extra point to tie the game at 7-7 to end the first quarter.

The Bulldogs scored on their next drive early in the second quarter. The Bulldogs made a reverse play that Luke Dyer threw to Quentin Rogers for a 30-yard touchdown. Walmer nailed the extra point to give the Bulldogs a 14-7 lead.

Adams led the offense back onto the field and capitalized on the Braves’ drive. Adams threw a 26-yard pass to Brayden Trimble. Traxler nailed the extra point to tie the game at 14-14.

The Bulldogs defense caused two turnovers on the next Braves’ possessions. Adams threw an interception and then a mistimed snap caused a fumble that the Bulldogs recovered. The Bulldogs capitalized on one of the mistakes scoring on a Johnson 14-yard rushing touchdown to extend their lead to 28-14.

We turned the ball over and gave them opportunities,” Head coach Patrick Etherton said. We had some penalties and we did some stuff that was uncharacteristic and I think we gave them too many opportunities. When you give them the ball they are going to score a bunch of points, because they are super talented.”

The Braves defense held on to make the Bulldogs commit a turnover on downs. The Braves ended the second quarter down 28-14.

The Bulldogs received the ball to start the third quarter. A minute and nine seconds into the third quarter, Johnson scored on a 40-yard rushing touchdown to extend the Bulldogs’ lead to 35-14. Johnson finished the game with 330 rushing yards and five touchdowns.

The Braves almost scored on their next possession. Adams found Trimble in the end zone. Trimble was in triple coverage, but Adams hit him square on the chest and Trimble almost made the play. The Bulldogs scored twice more to win 49-14.

The Braves fall to 2-1 overall and 1-1 in Apollo conference play. The Braves face Taylorville this week on the road and kickoff is at 7 p.m.