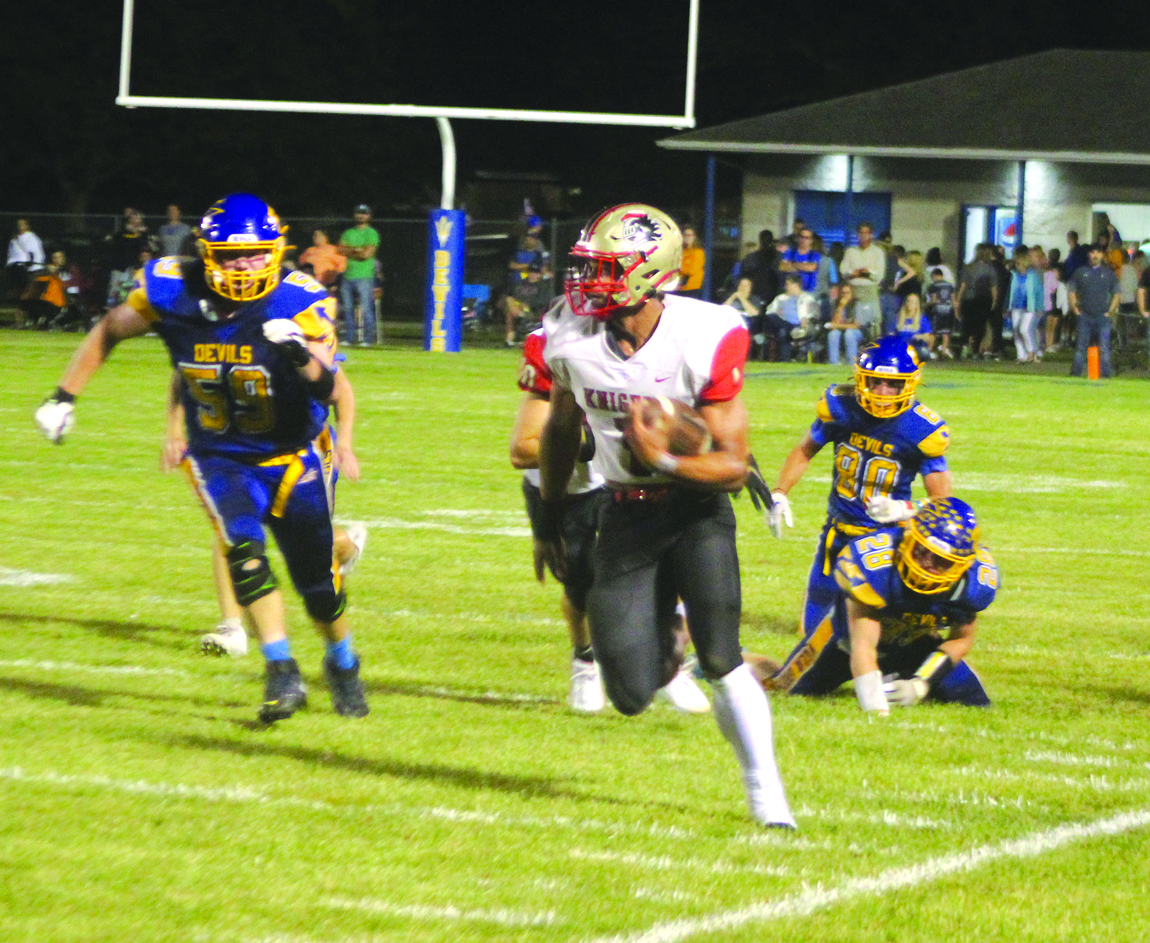 Kaden Feagin, quarterback for the Knights, takes off on a keeper on his longest touchdown in the game against Villa Grove last Friday. Kaden would run the ball from the 50 to the near side line and then cut all the way back across the field and into the far corner of the end zone for his fourth touchdown in the first half. Kaden had 19 carries for 198 yards and four tds. The Knights won 35-18 over the Blue Devils.

The Arthur Lovington Atwood Hammond Knights football team moved to 2-1 on the season as they picked up their second win of the 2022 campaign. The victory over the Villa Grove Blue Devils on Friday, September 9 was also the first conference win.

When the game started it seemed as if the score would be a very high one as both teams scored on their first series, Villa Grove on a 2 yard run by their quarterback Layne Rund at the 8:44 mark of the first and the Knights answered with a 3 yard run by their QB Kaden Feagin. The Knights would take a 7-6 lead by virtue of a successful extra point kick by Chilton Ingram, three minutes after the VG score.

ALAH’s Daniel Arwine recovered a Blue Devil fumble less than a minute after their touchdown and the Knights would score on another run by Feagin, this time of 1 yard. Ingram’s kick was good and the lead was 14-6 with 3:09 remaining in the first quarter.

Villa Grove went on a long drive to the Knights’ 18 when ALAH junior Connor Nettles picked off a Rund pass on a fourth and goal play. The Knights started on their own 3 and went exclusively to the run with Feagin, Mason Allen, Landon Waldrop and Jayce Parsons sharing the load until Feagin scored his third td of the game on a 2 yard run. There was a bad snap on the extra point attempt but holder Noah Garrett alertly picked up the ball and threw a pass to Jayce Parsons for the two point conversion and a 22-6 lead with 5:40 left in the first half.

The scoring was not finished yet. The Blue Devils went on a 75 yard drive of their own and ended it with a 27 yard touchdown pass from Rund to Brady Clodfelder. The EP pass was no good and the home team had cut the lead to 22-12.

The Knights were not done scoring either as after an incomplete pass and a 5 yard run by Waldrop and the ball at midfield, Kaden Feagin would run to the near sideline and then cut back across the field all the way to the far side and crossed the goal line at the 1:02 mark and scored his fourth touchdown of the half. Ingram’s EP kick was good.

After the touchdown, Chilton Ingram kicked the ball just over the VG front line and ALAH’s Connor Nettles raced down the field and recovered the ball. The Knights ran out the clock and the visitors went into the locker room up 29-12.

Scoring in the second half would not be the story as the defenses especially the Knights stepped up and both teams only tacked on one more score in the game.

The Knights received the second half kickoff but a fumble gave the ball to Villa Grove with 9:19 left in the third. However on the Blue Devils second play from scrimmage, the Knights’ Connor Nettles once again intercepted a Rund pass at the 8:44 mark.

With Mason Allen gaining most of the yard on the ALAH next possession. He took the ball in from the 1 yard line for the Knights’ final score of the contest. Ingram’s kick hit the goal post and bounced out and the visitors had 35 points on the scoreboard.

Arthur Lovington Atwood Hammond will once again be on the road next Friday, September 16 as they take on the Cumberland Pirates in Toledo for another Lincoln Prairie Conference matchup. The Knights will finally get a second home game the following week September23 against the Tri-County Titans.

Stats for the Villa Grove game: