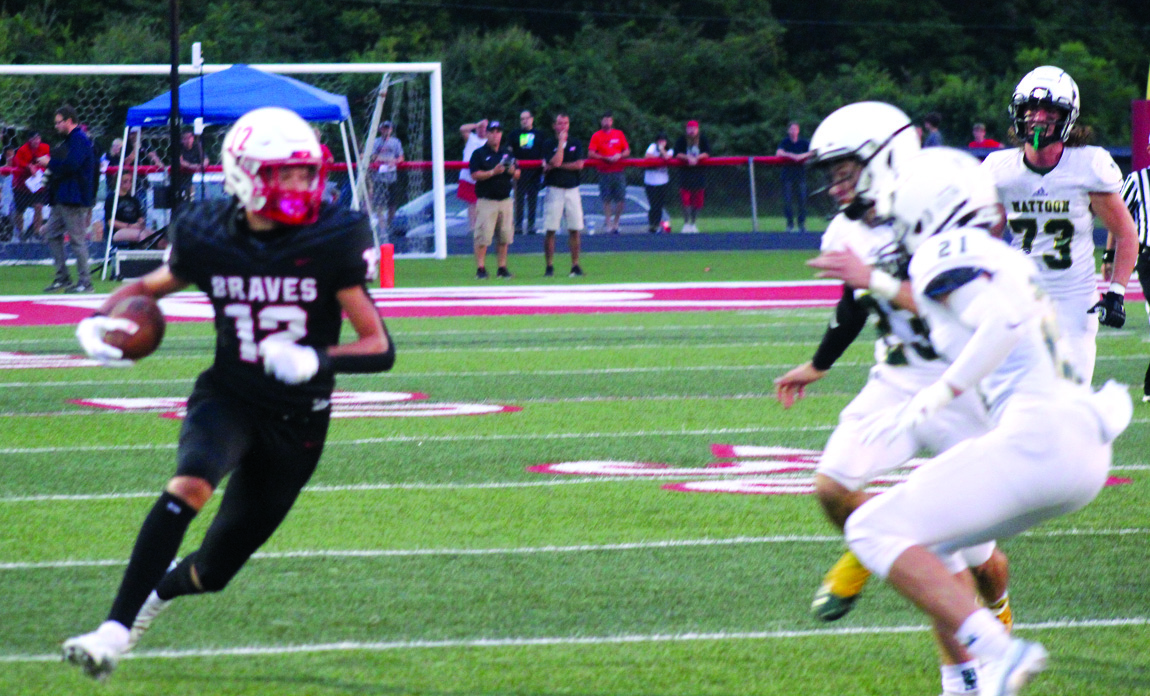 Grant McAtee attempts to avoid a tackle after making a catch in a 42-21 win against Mattoon at Mt. Zion last week.

The Braves’ offense started off their first two possessions with turnovers. The Green Wave capitalized on the second turnover when Deaiden Arnold ran in for a one-yard touchdown and Kaden Junge made the extra-point to give the Green Wave a 7-0 lead.

Adams on his third drive settled in and threw a 12-yard pass to Grant McAtee to move the chains. Adams then found Brayden Trimble for a 51-yard touchdown and Brayden Traxler nailed the extra-point to tie the game at 7-7.

The Greek Wave offense came down the field and got into the Braves 20-yard line on the next possession. The Braves defense contained the Green Wave offense and forced them to try a field-goal. Junge lined up for the kick and kicked it far left of the goal post to give the Braves the ball back.

The Braves and Green Wave didn’t score on their next drive. The Braves got the ball and used a trick play to score late in the second quarter. Adams threw the ball to McAtee and Trimble ran to mirror him as McAtee lateraled to Trimble for a Braves’ touchdown. Traxler nailed the extra-point to give the Braves a 14-7 lead going into the second half.

“I told our kids I was proud of the way we responded,” Head coach Patrick Etherton said. “We didn’t panic and it was good and then we had a nice kind of trick play there to end the half. The second half came out with some energy and some enthusiasm and our kids were focused and ready to go. Again, the nice thing is we have a bunch of younger kids who didn’t panic in a situation like that.”

In the third quarter, the Braves got the ball back midway through and scored twice in three minutes. Adams scored on a seven yard rushing touchdown and Traxler made the extra-point to give the Braves a 21-7 lead.

Adams started the next drive connecting with Trimble for a 15-yard pass. Bryson Richardson then took two carries that got the Braves to the four-yard line. Adams then found McAtee in the endzone for a touchdown to extend the lead to 28-7.

The Green Wave scored their second score of the night when Slater Trier found Owen Hawkins on the left-side of the endzone for a nine-yard touchdown pass. Junge nailed the extra-point to make the score 28-14.

The Braves improve to 2-0 overall. The Braves will face Mahomet-Seymour at home this week and kickoff will be at 7 p.m.