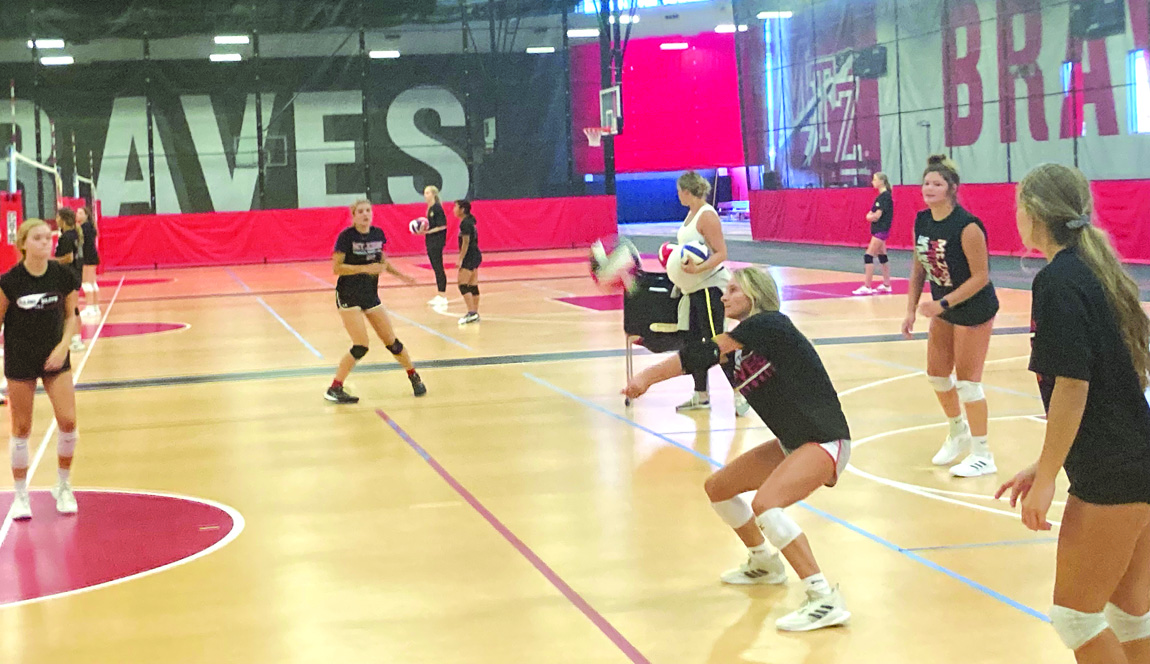 McKenna Crawford goes for a dig in a Mt. Zion volleyball practice.

Coach Traci Dyer-Townsend heads into her second year as the head coach of the Braves. Coach Dyer-Townsend said that the energy level has been awesome to start the season.

“You always anticipate the third or fourth day to be like they’re tired, they’re sore, but they have brought it,” Coach Dyer-Townsend said. “This group meshes well and has really good chemistry. So it’s been fun and energetic. We’ve been breaking down a lot of stuff. So I’ve been very monotonous, especially with passing, but they’ve done so good at staying focused, and not just going through the motions.”

The focus of the preseason and practices have been passing. Last year, Coach Dyer-Townsend felt that was the team’s rock along with good ball control.

“I want to continue that, especially with the younger group and get them up to par,” Coach Dyer-Townsend said. “So we’ve been passing and serving and we’re not like super aggressive servers. I think that’s a game changer. “We’ve been working on fixing a lot of their old habits and trying to make them just to be aggressive, faster. We have been timing serves to speed up our velocity a little bit to just make it a little bit faster.”

Coach Dyer-Townsend believes that Isabelle Holmes will step up this season after coming off the bench last year, but has stepped up her game this summer and has been earning her spot.

Alexis Smith comes back after suffering an injury at the very end of the season. The senior will set na shut for the Braves and be the go-to hitter. Junior Denver Anderson once healthy will be expected to be back on the outside and have a huge impact.

Junior Maddie Doolin is going to be depended on a lot as her and Denver are the only two juniors. Doolin only played JV last year, but she’ll be in the second setter.

Senior Kalliana Becker will be a hitter that if she gets her timing more consistent she will be a help to the Braves’ offense. Senior Bracie Barnes will be back, but will be a step behind due to her doing military basic training this summer.

Senior McKenna Crawford will be the team’s libero (defensive back specialist). Coach Dyer-Townsend says that Crawford is the bread and butter for her team and gets the team together, communicates and she’s a great leader.

Smith described her time with the Mt. Zion Volleyball program as her second family and stepping into the leadership role last year and this year has been a huge responsibility.

“Our team this year is made up of mostly underclassmen, they are very impressionable,” Smith said. “I love this team and being one of their leaders is a great honor. I have accepted this role by becoming a role model, but also a coach in a sense. I am all of their biggest cheerleaders, but I’m always there critiquing them or giving them advice on and off the court.

Smith wants from this year just to play as an individual goal. Smith tore her ACL in last year’s regional semifinal and the first game of the season will be her first game back to the game she loves. As a team Smith hopes for consistency and cleanness.

“When we play like that we are a whole new team,” Smith said. “This year’s team is a lot closer than previous teams I have played with at Mt. Zion and I believe it’s pretty evident when you watch us play. This year for our team I want a conference title. I believe if the team stays consistent we could get it. Besides titles, I want this year’s team to be remembered as a close knit family who always cheered each other on. This year we don’t want individual players, we want team wins.”

Holmes has taken on her role as a leader by holding the underclassmen accountable and being positive and sweet to them to help them have a good experience with the team. Holmes’ individual goal would be to improve on everything and the team goal is for the team to grow and learn more. Holmes wants to be remembered by her teammates as someone who was positive and uplifting.

Becker believes that as a senior and leader it’s about being a good role model for the younger players and lifting up her teammates. Backer’s individual goal is to become more consistent on her serving and the team goal would be for the team to play their best every game whether it’s a win or loss.

Crawford has taken on her leadership role as making sure the underclassmen get acclimated to the team and understand what to do in a game. Crawford’s individual goal is to push herself to be more of a leader and treating her team like a family. The team goal would be to end the season on a positive note and keep the energy positive throughout the season.

“I want to be remembered as someone who would fight for their teammates and basically do anything for their well being or for helping them outside of school,” Crawford said. “I just want to be that leader for them.”

Coach Dyer-Townsend that her captains and leases of the team have taken control of the energy of this team and have made it more positive.

“Last year, I think we were all just feeling each other out and no one knew what to expect,” Coach Dyer-Townsend said. “This year I had them write a letter of recommendation on why they deserve to be on the team. And one of the seniors said that this team is like the closest she’s ever been to her in her four years. So I think they have a lot of ownership over the culture. And it has made practice like people work harder and step up because they’re leading.”

“Our offense and our blocking needs to improve drastically, but I think if we can be consistent and not let the team score because of our defense we will be in that position,” Coach Dyer-Townsend said.

Coach Dyer-Townsend’s overall message to readers and the community is to come to their fame and that they’re going to be fun with lots of energy and to expect more from her team this year.

“If we stay focused and consistent, it’s gonna be a good season, like growth and development,” Coach Dyer-Townsend said. “I think you’re gonna see a lot more this season.”

The Braves start their season at home on Thursday against Effingham. The game is also senior day with introductions at 6:45 p.mz and the game starting at 7 p.m.