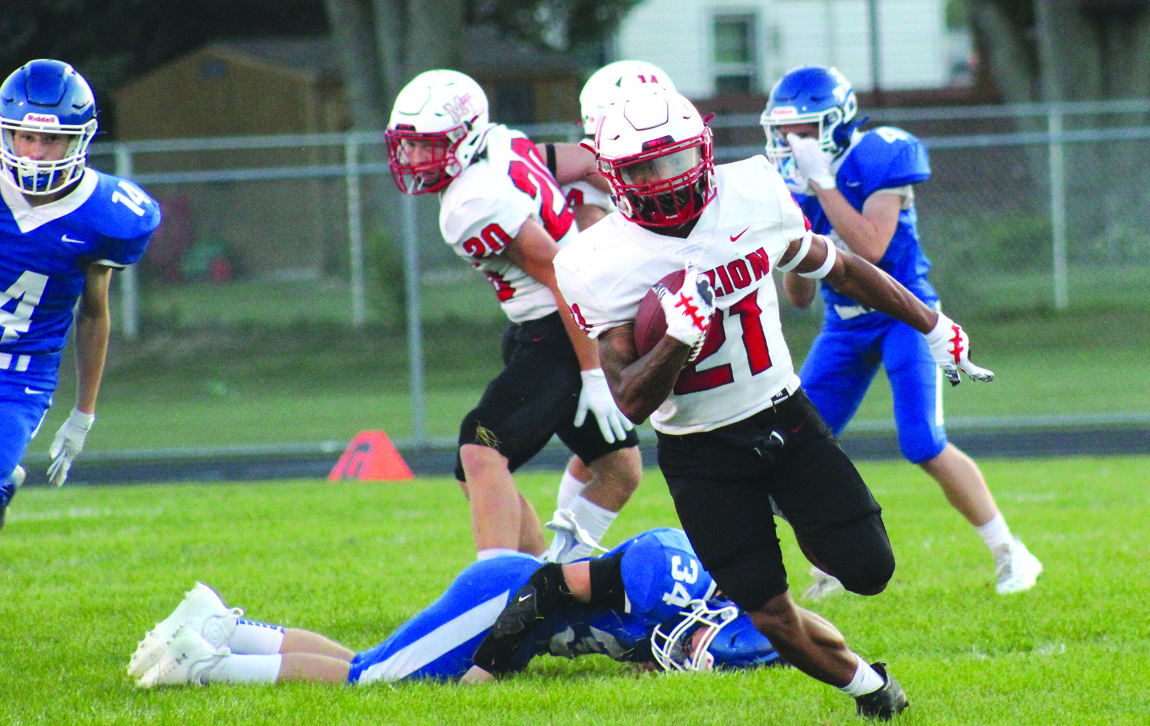 Chiren Petty finds a gap during an 83-yard kickoff return touchdown in a 48-7 win over Limestone Community High School at Limestone.

The Braves executed on the opening kickoff. Chiren Petty caught the ball and found holes in the Limestone special teams and ran for an 83-yard kickoff-return touchdown. Brayden Traxler nailed the extra point to give the Braves a 7-0 lead.

The Braves defense contained the Rockets defense starting off by making them turn the ball over on downs. On the Rockets next possession, Grant McAtee intercepted a pass to end the Rockets second drive.

On the third and fourth Rockets drive, the Braves forced them to punt. On the fourth one, Brayden Trimble received the punt and found holes on the Rockets’ special teams for a 63-yard touchdown. Traxler nailed the extra point to give the Braves a 14-0 lead.

The Braves’ offense started off with difficulties. Adams settled in and on his fifth drive of the night, got into the Rockets half of the field and fired a complete screen pass to McAtee. McAtee took off for a 28-yard touchdown and Traxler nailed the extra point to give the Braves a 21-0 lead.

“I think we struggled a little bit execution wise up front, and they ran something different than what we thought and we practiced,” Head coach Patrick Etherton said. “And what they saw last year was different than this year. So that took us a while to get adjusted up front. I think we missed some open receivers and I think part of it was just the first game, excited and ready to go. And then I think defensively we misaligned a couple of times, so we’re gonna get that squared away.”

The very next drive, Adams connected once again to McAtee. Adams found McAtee dashing down the field as McAtee beat his defender one-on-one for the catch for a 23-yard touchdown. Traxler nailed the extra-point to make it a 28-0 lead.

The Braves got the ball once again, but Jayden Damarin took over at running back. Damarin broke open on a 2nd and 25 for a 65-yard run that got him to a 1st and Goal with two yards to go. Damarin then powered in for a two-yard touchdown. Traxler missed the extra point and the Braves took a 34-0 lead still in the second quarter.

Limestone got on the scoreboard late in the second quarter. Izzy Aguilar-Nunez ran for 38 yards during the Rockets’ scoring drive and ran in the only score for the Rockets of the night. Aguilar-Nunez broke open for a 16-yard rushing touchdown and the extra point was good.

“We have a bunch of young kids that hadn’t been varsity starters,” Coach Etherton said. Once our kids settled down we played some pretty good football. I think we have a lot to work on, but got to see some kids run around tackle in a live game and I thought limestone did a nice job there kids are well coached. They had a good plan. I think offensively we have some weapons.”

The Braves improve to 1-0 and will face Mattoon at home. The game will be Friday with kickoff at 7 p.m.

“They’re (Mattoon) going to be much improved,” Coach Etherton said. “I think they have a lot of excitement and I think the big thing for us is just, we scored on three phases of the game and almost scored on four phases, all four phases. So I think we did some good things and we got some talented kids so it’s really going to be tweaking the little things and getting ready for the game and playing Mattoon.”