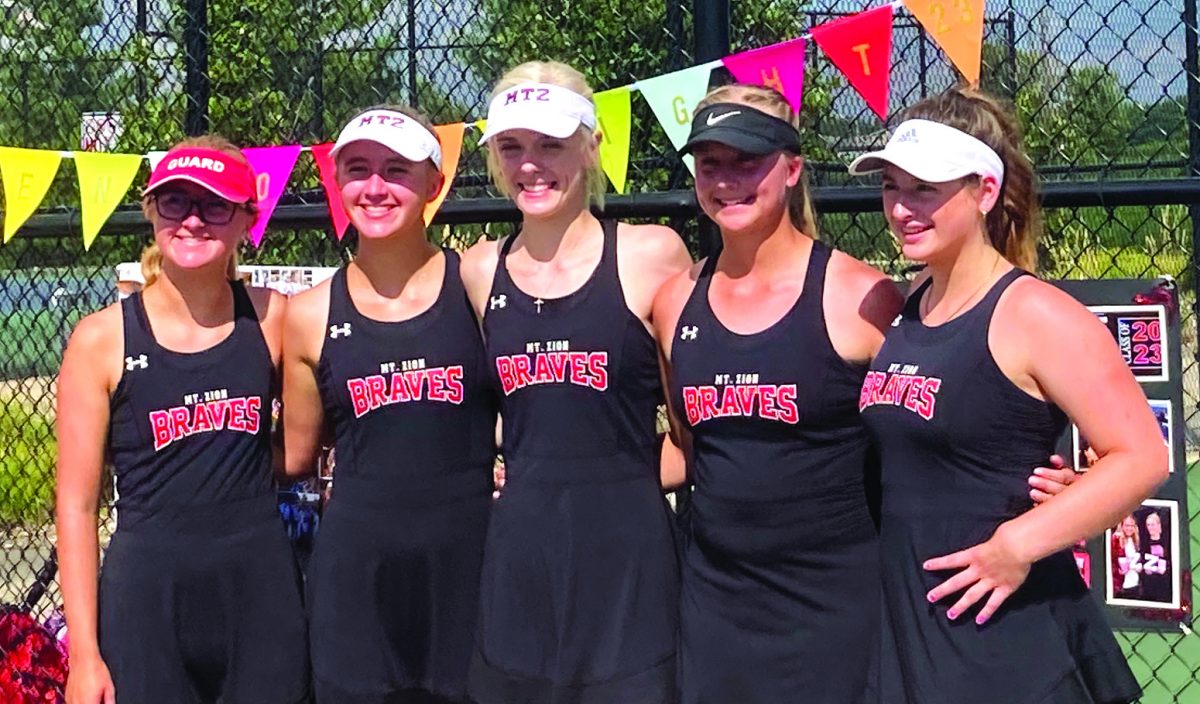 Seniors Audrey Bradford, Allison Bradford, Angelina Henderson, Kayla Schnippel and Madison Koester all in a picture together at their senior day last week.

Last year, the Braves finished third in the conference championship tournament with 43 points behind Mattoon and Effingham. In that tournament seniors Allison Bradford and Angelina Henderson along with Peyton Schroeder made it to championship matches.

The Braves return those three along with seniors Audrey Bradford and Kayla Schnippel. Head coach Mike Roberts said that his team is excited about what’s ahead and that has been evident in the first couple weeks of practice.

“We’re excited about it,” Coach Roberts said. “ We have a lot of returning players from last year, we only graduated two out of my varsity lineup. And so we’re really excited about the talent that we have this year.”

In practices, Coach Roberts said that the focus has been trying to figure out what partners will be paired with who when it comes to doubles play.

The Apollo Conference was senior heavy in some states-power for other teams. With the players returning Coach Roberts believes that this Braves’ team can make some noise.

“That’s our goal even though a lot of teams will kind of discredit that, ‘’ Coach Roberts said. “They won’t be looking for that. I kind of like beating that sneak in the back door team and having other teams think that we’re a little bit better than what they remember.”

The last time the team won an Apollo Conference tournament was in 2017. Allison Bradford, Audrey Bradford and Schnippel all said when interviewed that their team goal is to win the tournament and title.

Allison Bradford has taken on her leadership role by helping freshman and other new members to the team to become acclimated to the team, learn how to play tennis and learn how to play better as a team while implementing team traditions including giving out ribbons after every match that is won as a team along with team bonding activities.

Allison Bradford’s individual goal is the same as her team goal.

Audrey Bradford took a similar route to leadership as her twin sister in helping getting the freshman acclimated to the team and telli mg them what the future holds for the team along with how matches are like. Audrey Bradford wants to make it to state individually and win in her singles division at the Apollo Conference Tournament.

Audrey Bradford also wants to be remembered as a good leader and a kind player.

Schnippel has embraced her leadership role as setting a good example for the underclassman and answering questions that they might have. Schnippel’s individual goal is to win her individual division at the Apollo Conference tournament and continue to improve. Schippel wants to be remembered by her teammates as a good role model and good example.

Coach Robers said that he expects his seniors and juniors as leaders to pave the way for their teammates and show the girls how to support each other.

Coach Roberts said that there are two season goals for this team. One is to win the Apollo Conference Tournament and one is to send individuals to the IHSA State Tournament for the first time since 2018.

“It takes a desire, number one,” Coach Roberts said. “Winning conference and going to state are two different things. Girls will play better at a conference tournament than they do at a state tournament. For the conference, it’s a little more school oriented and it’s more prideful, because everybody’s there.”

Coach Roberts’ overall message to readers and the community is that this is a special team this year that has a lot of new and returning talent.

“I think the leaving conference talent will bring us the experience to maybe win the Apollo Conference, which should be neat,” Coach Roberts said. “It’s been elusive for us. We’ve been close a few times over the last 15 years, but being that close not winning means you’re just wanting more is more and so it’d be really special, just knowing how hard some of these girls have worked for it. I think it would be really neat because there are a lot of people in this community that have either had kids that have come through this tennis program and we’re worth coming to watch.”