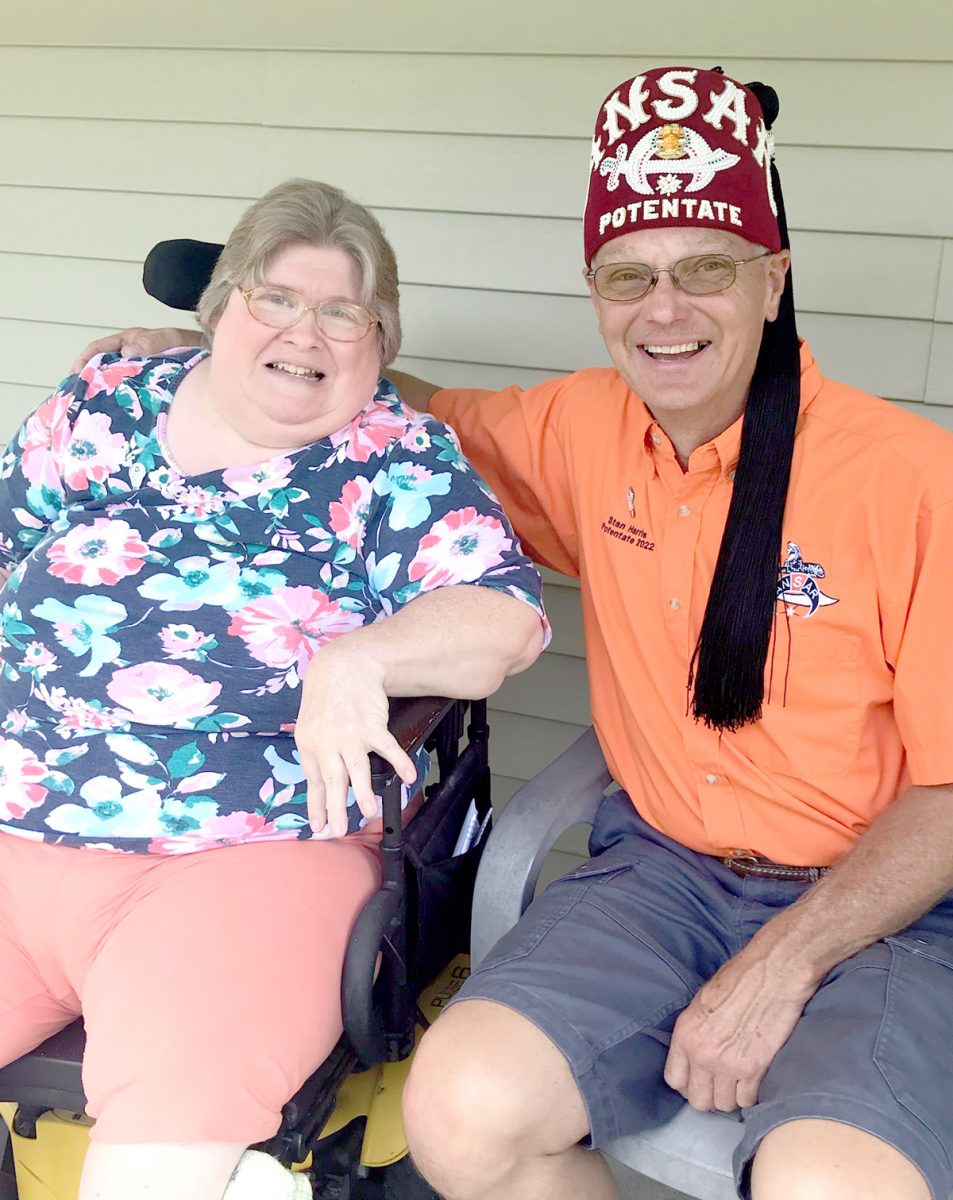 This is the 28th annual Atwood Apple Dumpling Festival. This year we are honored to salute Stan Harris, Potentate, and the Ansar Shrine of Springfield and have them as Grand Marshals. While we talk about the Shriners, and the good they have done for children and families over the years, this is a story about a lady from Atwood who has experienced their help, love and generosity, LaShon Terril Callahan.

LaShon was born on July 19, 1965, the daughter of Kathy & John Terril Jr. She was a preemie and weighed 3 lbs. She was born at only 6 months with respiratory problems because of being undeveloped. The doctors didn’t think she would survive. She was placed in an incubator and taken by ambulance to Springfield. She wasn’t able to come home until September.

At 9 months old, Kathy noticed something was wrong, LaShon had no balance. They took her to her regular doctor and he sent her to a specialist. She was diagnosed with cerebral palsy. She met the doctors from Children’s Hospital, Springfield at an office in Decatur. At age 2 or 3, LaShon and Kathy weren’t exactly sure of the age, she started Easter Seal therapy at a Children’s Hospital Treatment Center. She was placed in braces and stayed in braces until she was 5 years old.

Pearl Prey of Atwood was a Mason and he was tutoring her dad to be a Mason. They were talking about LaShon and what she had been through. Pearl suggested she go to the Shriner’s Hospital. Pearl got the papers they needed, they filled them out and she was accepted as a patient.

At 10 years old, she had her first surgery at Shriners to release muscles to enable her to spread her legs to make it easier to go to the bathroom. She was in a cast with a bar for 3 months.

At age 11 was her second surgery. They clipped hamstring muscles in the back so she could straighten her legs and her foot would go down. She was in a straight leg cast, no bar.

LaShon’s third surgery was at 12 years old to do more correcting of her ankles. All of these surgeries were at Shriner’s Hospital in St. Louis. She has had therapy most all of her life.

Despite LaShon’s many challenges, she wanted to do what she was able to do for others. She participated in the Cystic Fibrosis Bike-A-Thon for two years. She stated, “I know what it is like to have limited mobility so I want to try and help other children.”

You may remember seeing LaShon walk uptown with her walker when she was a teenager with her friend, Angie Moseley.

LaShon graduated from McArthur High School in Decatur in 1983 and attended Parkland College for accounting. That is when she got her first electric wheel chair. She has graduated to more comfortable upscale models over the years.

LaShon has never been able to walk without assistance. She said things were much different 57 years ago. There are so many new accomplishments now to help children. But LaShon did survive despite all obstacles. She was a fighter then and has been all her life.

When asked to give a statement about her experience with Shriners Hospital LaShon answered, “They do wonderful things. I will never forget about the Surgical Fairies. When we (the children) would wake up after surgery, there was a small gift in our bed. You were excited because one of the Surgical Fairies had been there. Everyone made you feel so special. I knew I was in good hands. I will always support the Shriners.” LaShon continued, “They ask me to help a small boy and entertain him because he was scared. While I was helping him, it was helping me too. When I was at Shriner’s Hospital, they were my family when my parents weren’t there.”

Kathy & John gave a parent’s view of Shriner’s Hospital, “Probably the hardest thing for us was not being able to stay when our child was going to have surgery. At that time parents were not allowed to stay. It is so much different today. We will always be grateful for the doctors and nurses at Shriners taking care of our child when we couldn’t be there. We did a lot of praying.”

LaShon tears up a little when talking about Shriner’s Hospital because it was so important in her life. She had to be brave and strong to make it through surgical times when her mother and dad could not be there. She looks back on those times and while she has had a difficult life (and her parents too), she has made the best of it. She has a contagious laugh and loves people. She lived to tell her story through tears and smiles. She is one tough lady and Shriner’s Hospital has helped to make her that way.