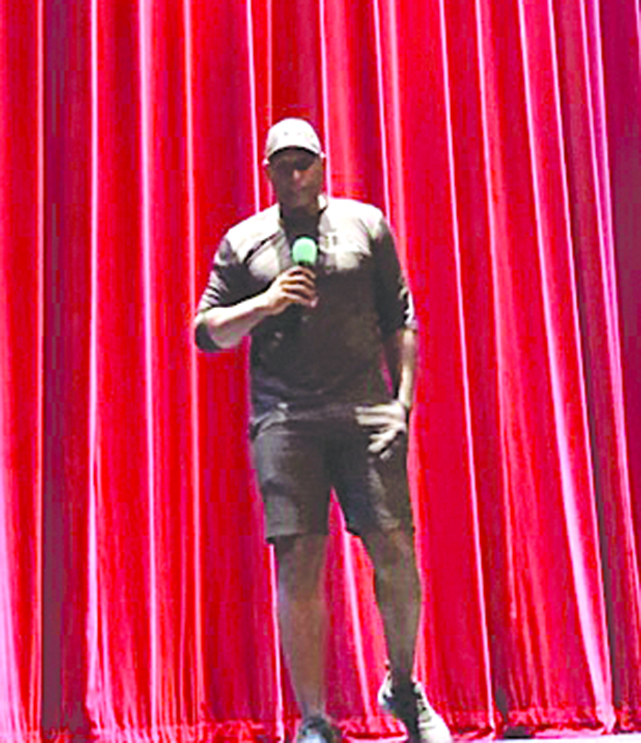 Desmond Clark at the Mt. Zion High School Auditorium having a discussion with the attendees.

By BLAKE FAITH
Staff Writer
Desmond Clark is a former professional football player, but on July 26, he was at Mt. Zion High School talking to students and attendees on how to give them tools to be successful and achieve greatness. Clark asked a question during his speech that didn’t get a lot of hands.

Maybe two of the 20 hands in the auditorium were raised. Clark’s face dropped and he went on to say that greatness isn’t far off and due to his deep passion about what he does.

Clark then asked members of the crowd to define greatness. Some said being a good person and one said being good at a certain thing. Clark defined it as an acknowledgment or recognition of a high standard or quality.

Clark played 12 seasons in the NFL and was drafted as a Tight End by the Denver Broncos in the sixth round of the 1999 NFL Draft. Clark had never played the position and went on to earn his spot on the roster. From there, Clark went on to play for the Miami Dolphins and the Chicago Bears. In seven seasons with the Bears, Clark was the starting tight-end and played in the 2006 Super Bowl with the Bears.

Clark was born and raised in Lakeland, Florida, a town between Orlando and Tampa Bay. Clark played football, basketball and baseball growling up and always wanted to be on the gridiron. His childhood dream was to be like Walter Payton and lead his team to a Super Bowl Championship.

Clark’s upbringing included a divorced set of parents, a father who abused crack and bouncing around from house to house at first. Once Clark was able to settle into a place he decided at a young age and told his mother that he was going to be successful.

At 15, Clark dedicated his studies and his athletics to football. Clark earned himself a scholarship to Wake Forest University where he ranks second on all-time receptions.

By showing his background and also going through his book’s purpose that is called “Principles of Winning” Clark presented tools on how to be successful and great. Then after a hour of talking, Clark sat down with the crowd and listened to questions.

Clark was asked who the best quarterback he ever played with was. Clark answered Jay Cutler, but his favorite was Rex Grossman due to their personal connection on and off the field. Clark said that the best defensive player he has ever seen was Ray Lewis.

Clark described his Super Bowl experience and how running out on the field was the greatest feeling and heard the announcement of the NFC Champions. To this day though, Clark has maybe seen 10 plays of that game.

“I’m a competitor and I hate losing,” Clark said. “So to this day, I still haven’t watched the game.”

Clark ended the presentation by telling the high school students in attendance that they will have access to him if they ever want to reach out and appreciated the opportunity to speak that morning.