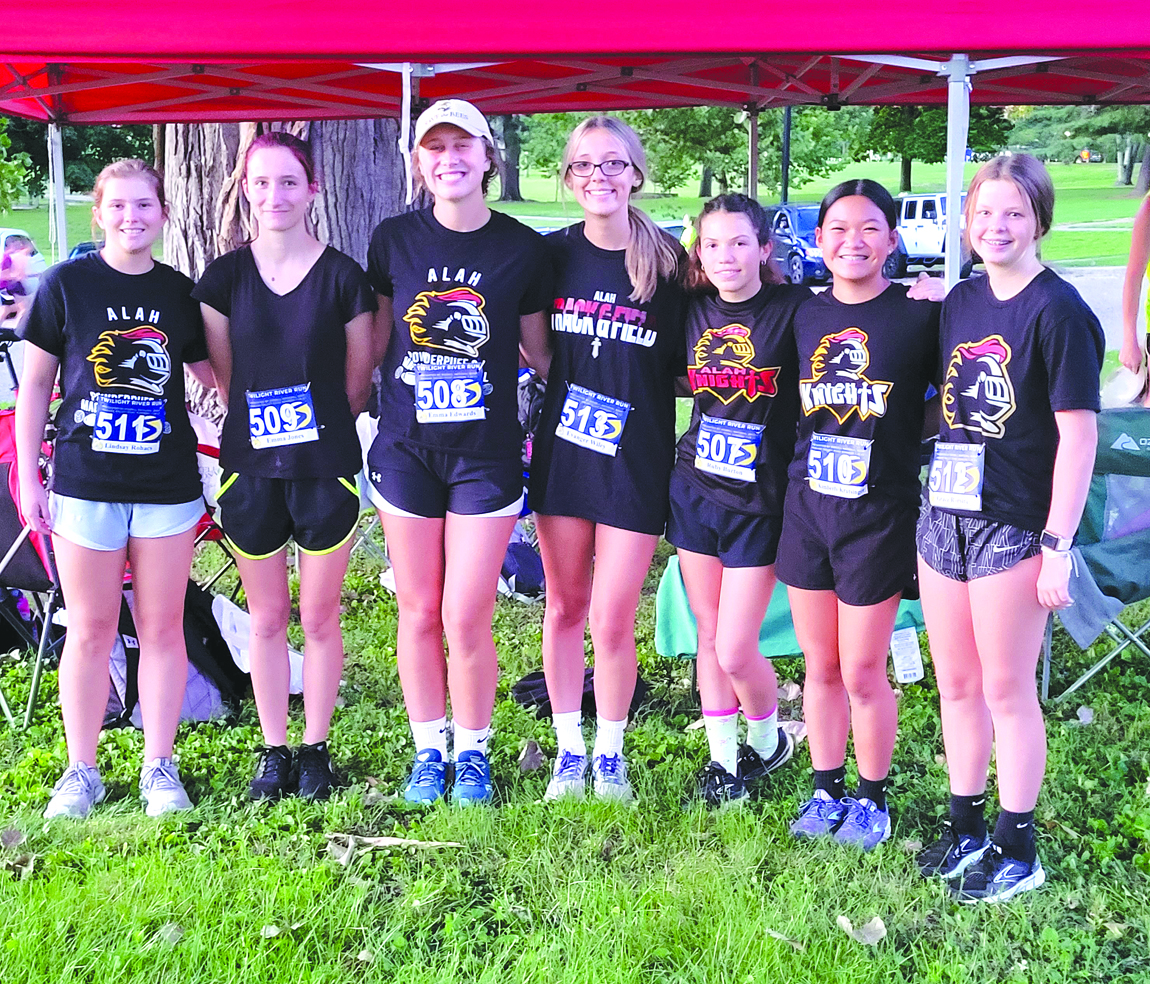 The ALAH girls cross country team is shown here prior to the start of the Wabash Valley Running Club’s Annual Twilight River Run. From left to right, are Lindsay Rohacs, Emma Jones, and Emma Edwards, the veterans of the team. Evanger Wiley, Ruby Burton, Kimberly Krutsinger and Grace Romine were running in their first ever cross country meet. 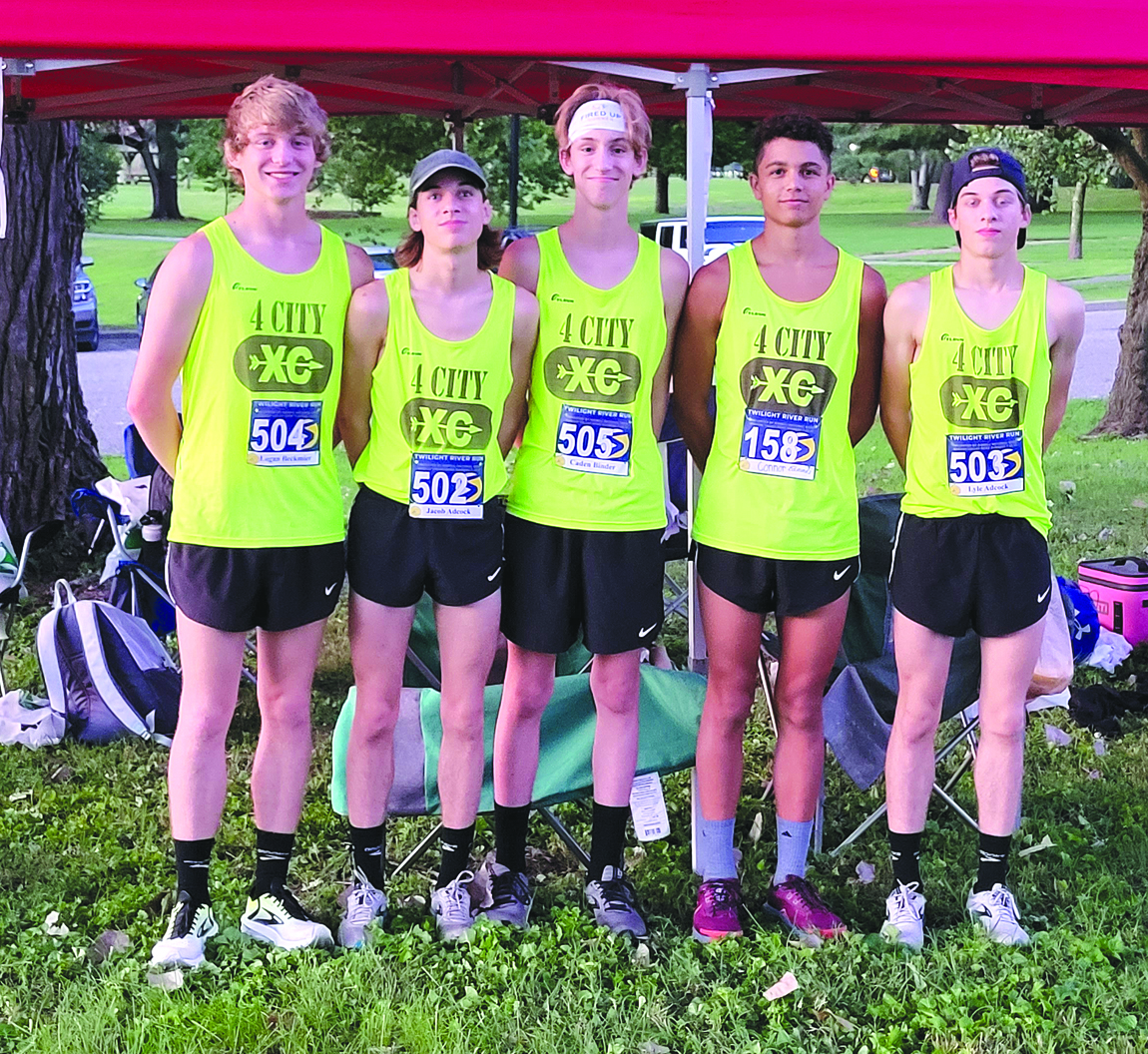 Pictured here are the members of the Arthur Lovington Atwood Hammond boys cross country team for the 2022 season. From left to right, Seniors #504 Logan Beckmier,#502 Jacob Adcock, Sophomore #505 Caden Binder, and Seniors #158 Connor Edmonds and #503 Lyle Adcock. The boys are seen here before their first competition this season, a 5K run in Terre Haute, Indiana. 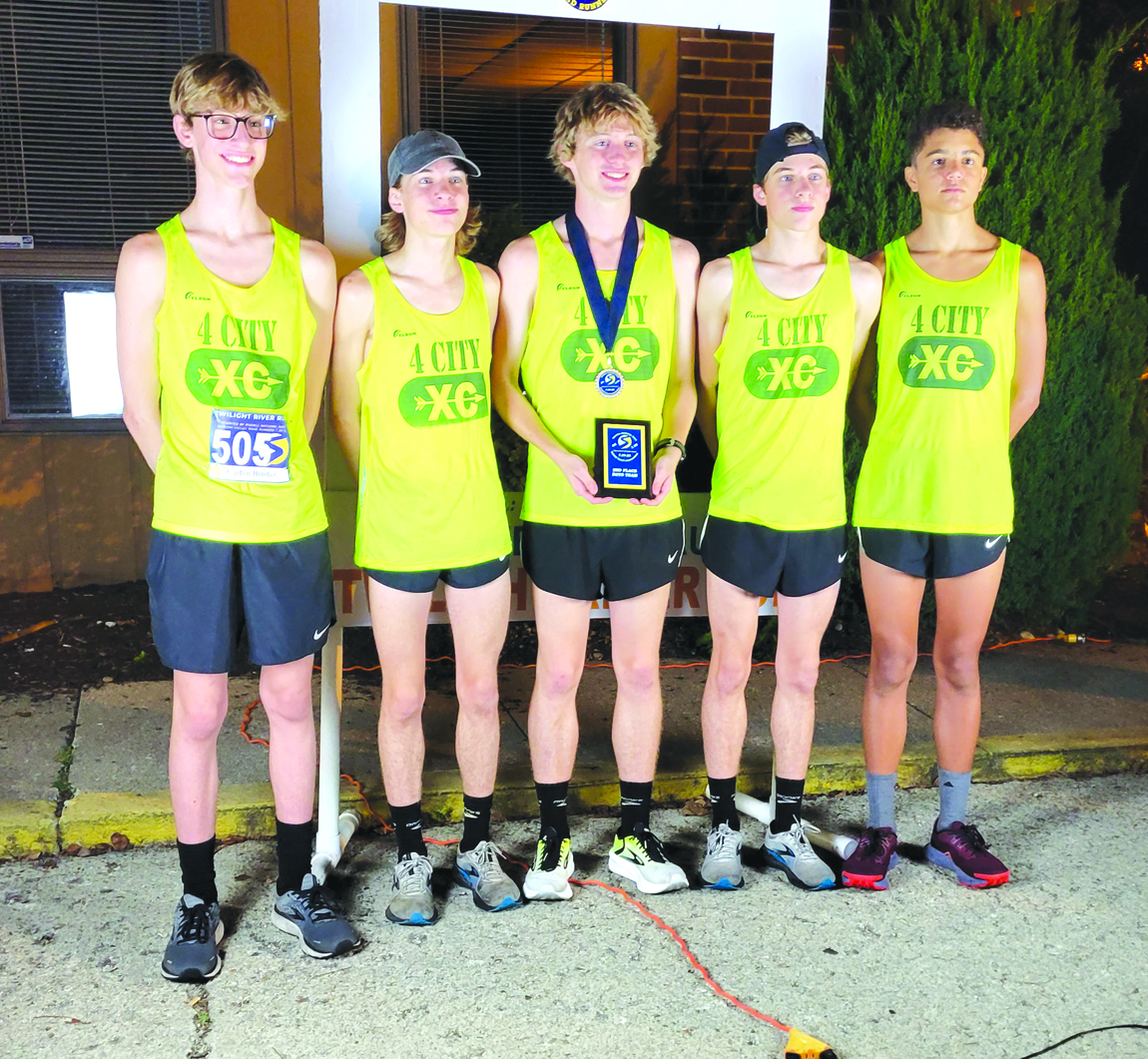 The ALAH Cross Country program completed summer workouts and kicked off the 2022 season with a trip to Terre Haute, IN. It was there that they ran the Wabash Valley Running Club’s annual Twilight River Run in beautiful Fairbanks Park along the banks of the mighty Wabash River.

One of the unique aspects of this event is that besides the usual age group awards offered at most 5K races, this race features a high school team division with the winning school receiving $250 and the runner-up school gathering $100 for their programs. These stipends are awarded to both boys and girls teams.

Hitting the start line at 9:10 pm Illinois time, the Knight’s boys crossed the timing pad followed closely by the girls. Atmospheric conditions were still challenging with the thermometer in the low to mid 80’s and relative humidity in the uncomfortable range. Though the race was on a paved course, several hills in the park challenged the participant’s fitness.

Brazil, IN Northview and Terre Haute North High Schools both have historically outstanding running programs that are amongst the tops in Indiana. These two schools have significantly larger enrollments than ALAH and brought 15-20 boys and girls each. Runners from those two schools along with Senior Knight All Stater Logan Beckmier broke off by the 1 mile mark at a sub 5 minute mile pace. Lyle and Jake Adcock (both returning top 50 state runners) stayed within striking distance of the lead group just seconds behind followed by fellow Senior Connor Edmonds and Sophomore Caden Binder. Maintaining this pace, the Knight’s settled in through the 2 mile mark without much positional change. Over the last mile the Hoosiers gradually pulled away from Beckmier while running sub 16 minute efforts for the 5000 meters. Beckmier finished 3rd in the HS division and 4th overall in an excellent 16:15. Jacob and Lyle Adcock finish 6,7 HS and 7,9 overall in 17:13/17:16.8 respectively.

Edmonds and Binder complete the boys efforts with top 60 OA efforts. The Knights were outlegged by the Brazil group by 2 minutes cumulative time but still received the runner-up check of $100 plus a plaque.

The lady Knights have a new group of freshmen fillies running with the returning squad members who are led by 2021 sectional qualifier, Senior Emma Edwards. Leading our local girls running under the sycamores were Freshmen Ruby Burton and Kimberly Krutsinger. Competing in their 1st 5K representing ALAH, Burton runs a 23 flat to finish 6th in her age division. Krutsinger is 13th in the same division in 24:43. Emma Edwards finishes 27th in the 15-19 group traveling the 5000 meter course in 25:14 while teammates Lindsay Rohacs and new runner Evanger Wiley go 28:43 &.31:53 finishing 37 &40 respectively in the 15-19 group. Rounding out the ladies finishers were freshmen Grace Romine and senior Emma Jones. Due to a timing bib issue, Grace had no finishing time.

The girl’s high school division was won by the excellent team from Marshall, IL. They beat Brazil Northview by 2 seconds cumulative time!

This race was a first for the program having not done a summer ending event previously. It also served as a season opening “scrimmage” to gauge fitness and work on prerace routines. Besides participant Tshirts, there was plenty of Pizza Hut pizza for everyone afterwards!

As the squad begins official workouts, there is optimism within the program for a successful and very competitive season for the Lady Knights and, though short on numbers, the boys expect to be competing for a top spot in numerous elite invitational races as well as each IHSA post season event.