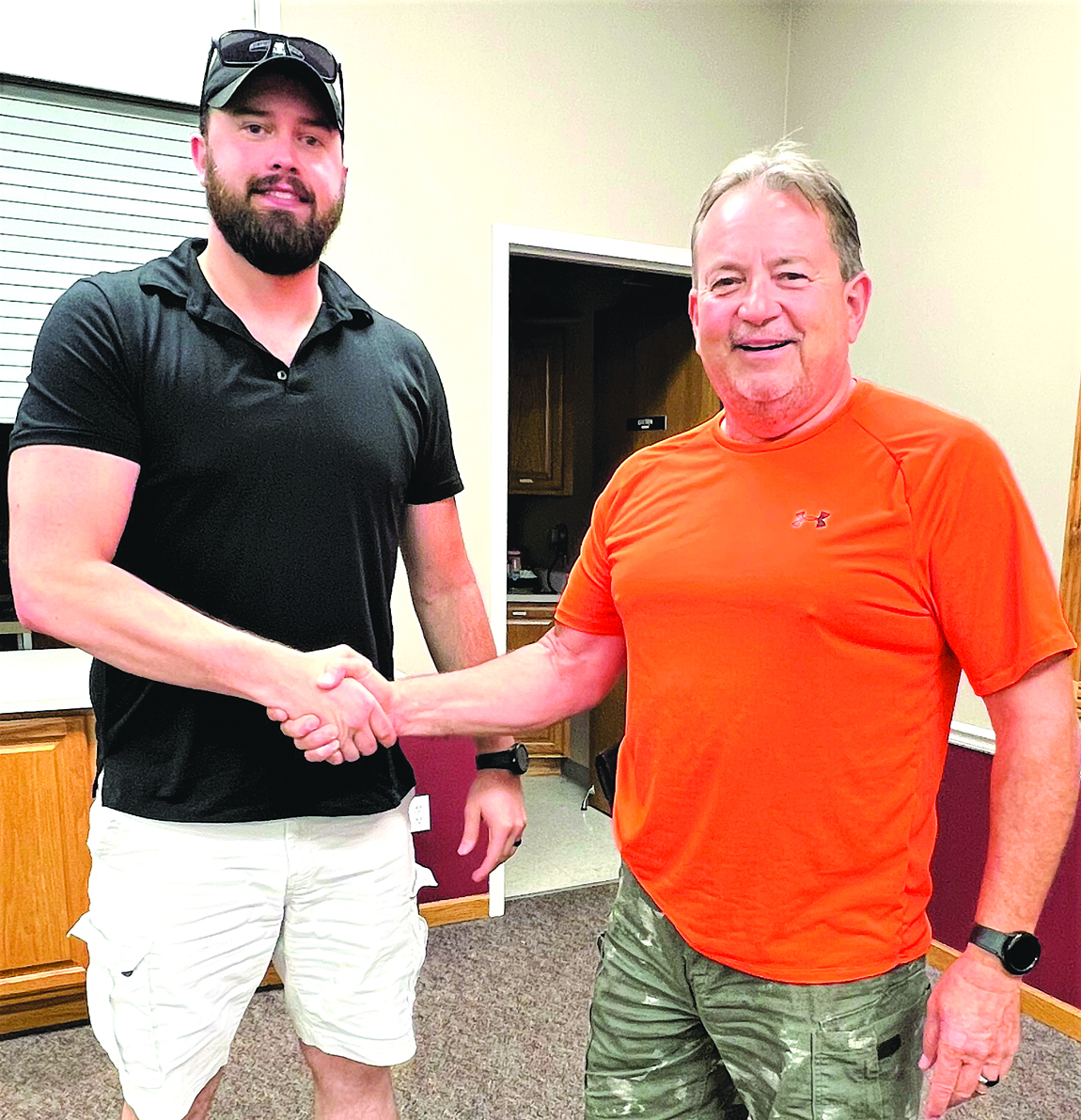 TINNION NEW PARK BOARD COMMISSIONER. Elliott Tinnion is congratulated and shakes hands with Arthur Park District President Dan Miller after he was sworn in at the July 11 meeting.

The on-going dispute between the Arthur Park District and the Moultrie-Douglas County Fair Board came to a vote by the park board at their regular meeting on Monday, July 11. Board members present were Dan Miller, Andy Monts, Kevin Strong and Elliott Tinnon. Tinnon was sworn in at this meeting to replace Ben Durbin, who moved to Sullivan. Absent was Mark Krutsinger.

To bring the public up to date, Dan Miller, president of the park board, along with trustee Andy Monts, attended a mediation meeting with fair board president Stephanie Alexander and fair treasurer Megan Beckmier and the fair’s lawyer Cari Rincker of Rincker Law, PLLC on Wednesday, July 6. The meeting was initiated due to a termination of lease letter from the park board the fair board received earlier in the year. The two boards had been in discussion regarding the letter but could not reach a suitable agreement. This is when the fair board decided it was time to hire a lawyer.

On July 11, the park board continued to point out they are not trying to force the fair out of this area and want them to stay. However, they do want complete control of the grounds and buildings. The fair has been in this location since 1952, and until recently the board thought they owned the buildings. Over the years they have used State of Illinois Rehab money, along with fair board funds, to build and update the buildings. The Cattle Barn was constructed in 1954 and the Merchant’s Building was built in 1958. From time to time there have been disagreements with the two boards, but it has always come out agreeable, until now. The fair board must have a 20-year lease in order to be in compliance with the Illinois Association of Agricultural Fairs (IAAF).

The park board has no problem giving the fair board a 25 or 100-year lease, but they want to be in complete control of grounds and buildings. They want to make it as simple as possible, just like the fireworks. “Our original intent was to take everything and manage it,” stated Miller. Kevin Strong said they shouldn’t let go of the open building due to possible expansion of ball diamonds. He added that if the fair board owned the ground the park board could never make any expansion plans.

Monts said he feels one of the fair’s concerns is a place to store their equipment. Strong added the fair doesn’t store anything in the cattle barn. “That will be no problem,” Miller stated, “because there will be no more trailer rental if we take it over. Our attorney said it is a terrible liability for both parties.”

Miller said we want to make it better down there. We want to make it a park 50 weeks out of the year, instead of two weeks out of the year a fair and getting ready for a fair. Monts says, “Whenever anyone wants to do anything ask the park board and then ask the fair board, and the fair board doesn’t want to mess with this, while we could be using this for community events, there’s empty buildings sitting there being unused.”

Miller brought the two proposals from the fair board for a vote:

To buy the land under the four (4) buildings. This land was granted to the park district when they first became a district.

Miller said our option is to move forward in taking the whole thing. Monts said, “We need to figure out what the contract looks like to give them what they need to have the fair, whether that gives them a price break or however we decide to do it moving forward because we are going to take over those buildings that they put there.”

Miller stated, “We need a motion to move forward with our plan of taking the entire facility over, as opposed to their proposal trading buildings 1 & 2 for 3 & 4; or the other side of their proposal of buying the ground under 3 & 4.” Kevin Strong made the motion and Miller added to move path forward us taking the entire facility over. The motion was seconded by Elliott Tinnon.

IPARK insurance was renewed, along with the accidental insurance.

Miller said once they take over the fair buildings they need to get IPARK here to move the limits.

Seven cameras are in place at the park and there was no camera available when the Lions Club building was damaged between June 19 and July 4. This is still under investigation by the Arthur Police Department.