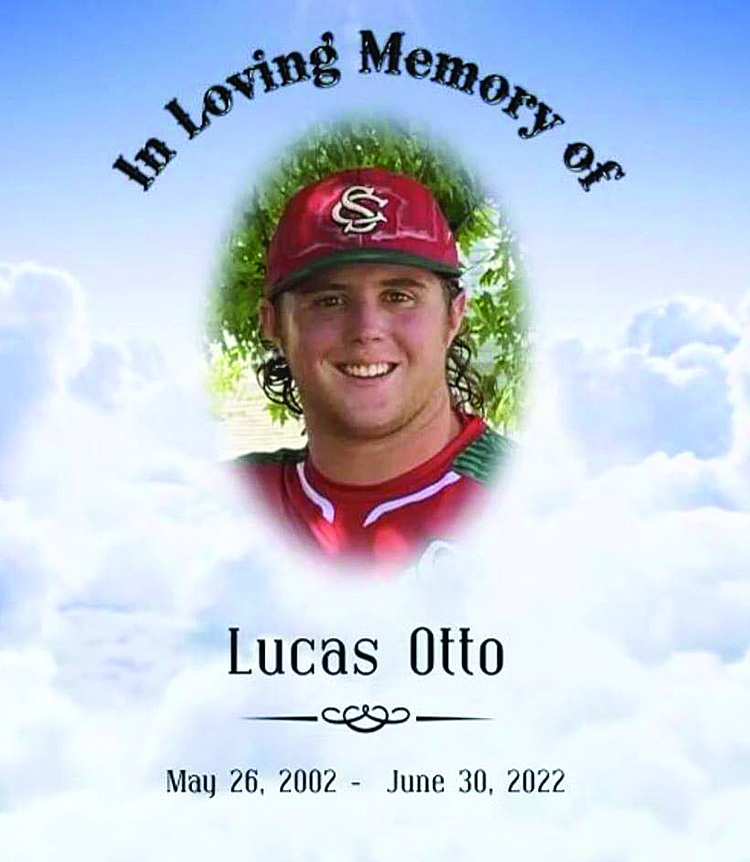 The Arthur community is mourning the loss of 2020 Arthur Lovington Atwood Hammond graduate Lucas Otto who was killed late Wednesday in a motor vehicle crash east of Springfield.

Lucas received many LOVC and LPC honors and awards for both baseball and football during his high school career including being named 2019 Co-MVP and 2018 MVP in football. In February of 2020 he signed a letter of intent to play baseball and continue his education at Lake Land College. Lucas was also crowned Homecoming King in 2019.

Knights head football Coach Ryan Jefferson stated, “Lucas Otto exemplified Knight Pride – he was 100% HEART, FAITH, and CLASS at all times. I am incredibly blessed to have been able to teach and coach this young man. He was a gentle giant – he would make a big hit on the field one moment and be hugging you the next.”

The 2022 Knights football team will be honoring Lucas this season with helmet stickers, L.O.V.E., which stands for Lucas Otto Valiant Effort.

Coach Jefferson added, “The word love was important to Lucas. When he said he loved something or someone, which was often, he meant it; you felt it! If someone tells you that you gave a Lucas Otto Valiant Effort, that should mean a lot to you, because he was all in on everything – his relationship with God, his relationships with people, school, sports, work. Lucas Otto’s legacy will remain in the ALAH Football Program forever. Thank you Lucas, we love you!”

He was currently a member of Springfield’s Lucky Horseshoes baseball team.

ALAH High School Principal Steffanie Seegmiller said, “The Knight family is devastated at the news about Lucas. Lucas was kind, caring, funny, smart, athletic, and always smiling.  He had a personality that would light up a room and bring smiles to everyone around.  He loved being a Knight and always gave 100% to everything that he did.”

She continued, “What we will always remember is the impact that Lucas had on the faculty, staff and his peers.  Whether you were his coach, teacher, classmate who was younger or older, Lucas had a gift of making everyone feel like a friend and feel loved. He made our lives richer with every interaction.”

In closing Seegmiller stated, “Remembering Lucas is more than remembering his academic and athletic accomplishments, although those were huge. His legacy is the impact he left on his friends, family, and community. It is remarkable the lasting impact he had on our school and community in the short amount of time we had with him. Our hearts and prayers remain with Lucas’ family and friends during this unimaginable time.”

Lucas leaves behind his parents Steve and Melissa, sister Kailee, and brother Marcus.