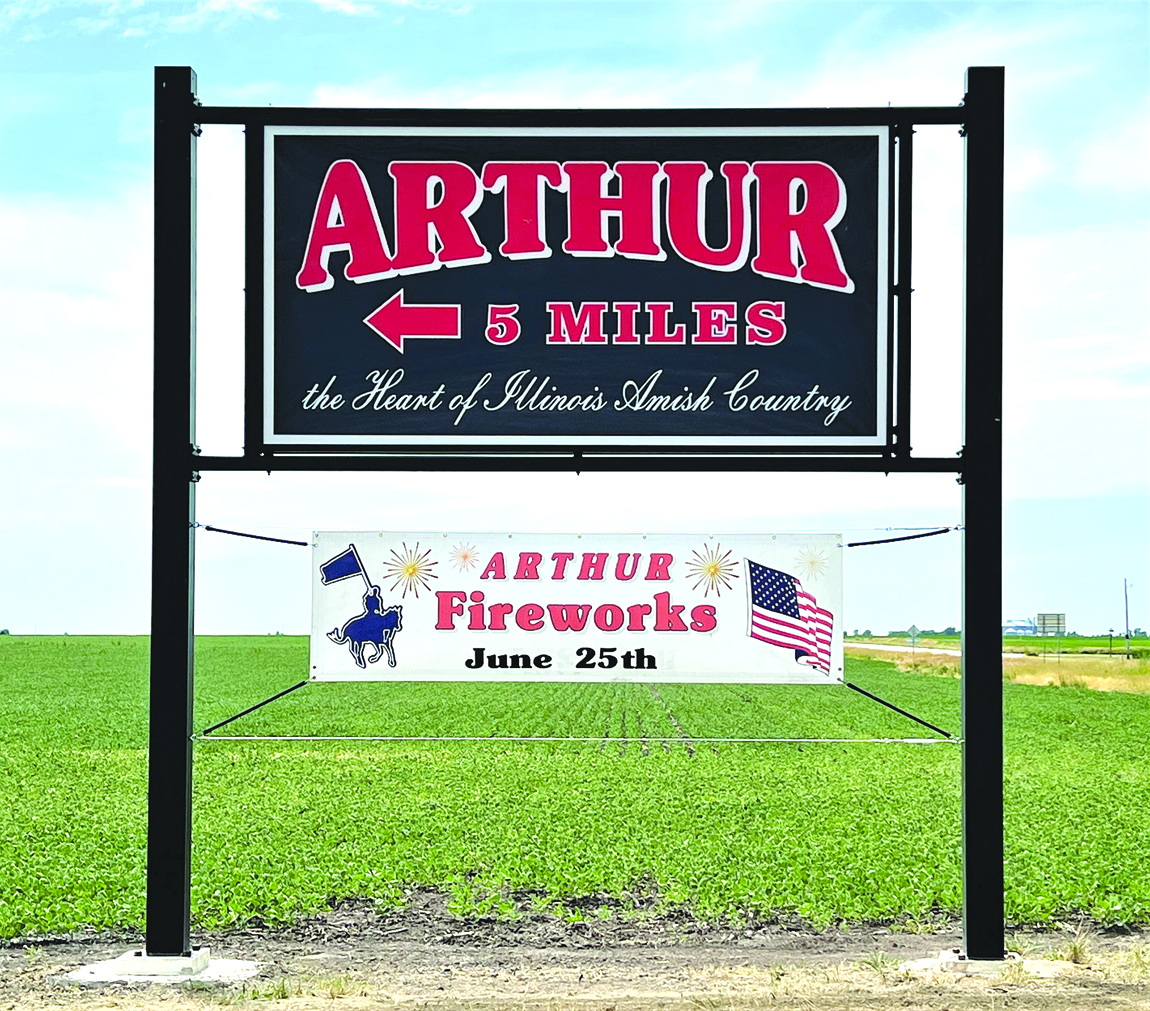 Newly erected sign at the corner of Rt. 36 and the Arthur-Atwood Road

It’s a sign, and what a great sign. At the regular meeting of the Arthur Village Board on Monday, June 20, Stephanie Wierman was asked to give a report on the newly erected sign at the corner of Rt. 36 and the Arthur-Atwood Road. Wierman is president of the Arthur Area Association of Commerce. This project has been two years in the making due to Covid and being directed to the wrong division of Illinois Department of Transportation (IDOT) in the very beginning. It was like starting back at square one once the State of Illinois went back to work following the shutdown.

The former sign had been in place since the late 1970’s when Terry Clark was president of the association, and Ervin Yoder contracted a company in Brocton, IL to make the sign. The new sign was built and designed by Alvie Jess (AJ) of Custom Screen Printing. Tri-County Welding built the powder-coated frame and replaced the old sign with the new one. Total cost of the project was approximately $16,000 and contributions towards the project came from the Arthur Foundation, Timm Trust, and the Village of Arthur. When it is completed, the finishing touch will be a die-cut horse and buggy erected on the top of the sign.
Wierman thanked the board along with the other two donors for their generosity in donations and everyone involved from start to finish of the new sign. Village President Rod Randall and the board voiced their appreciation to the association for all their efforts with this project.

President Randall stated he attended the C.H.I. party held on Saturday, June 18. He said it was a very nice event and thanked CEO Dave Bangert for the invitation.

In other business, the board approved the expenditures totaling $29,247.77

Arthur Police Chief Mike Goodman reported to the board that he had additional traffic control covered for the Freedom Celebration. He had three officers coming from the Illinois State Police, two each from Douglas and Moultrie County Sheriff’s Departments. This is basically for people exiting the fireworks. He also had applied to the Timm Trust for assistance in purchasing AED Defibrillator Units for the department. Which is scheduled to meet in July.

Grant Corum, Public Works Supervisor, gave an update on the street work that included painting curbs, crosswalks, parking spaces, and street striping spaces that had been done. He said part of the work had been done at night due to the excessive heat but it was nearing completion.

Trustee Jim Fleming thanked the community for their support for the recent Amish Country Tractor Cruise. Fleming was very pleased with the weather and participants. He had 120 tractors in the cruise. He stated, “It was a beautiful day for a 46-mile scenic drive through Amish country.”

Comptroller Erica Carter gave both the May report as well as the end of the fiscal year budget. She was pleased that almost all departments had come in under budget.

A discussion was held on new fencing at the wastewater treatment plant. The board approved a bid from Class-See Exteriors in the amount of $18,535.69.

Various logos were presented for review of the 2023 Arthur Sesquicentennial (150 years) logo. A final decision on the choice of logo will be made at the July 5 meeting.