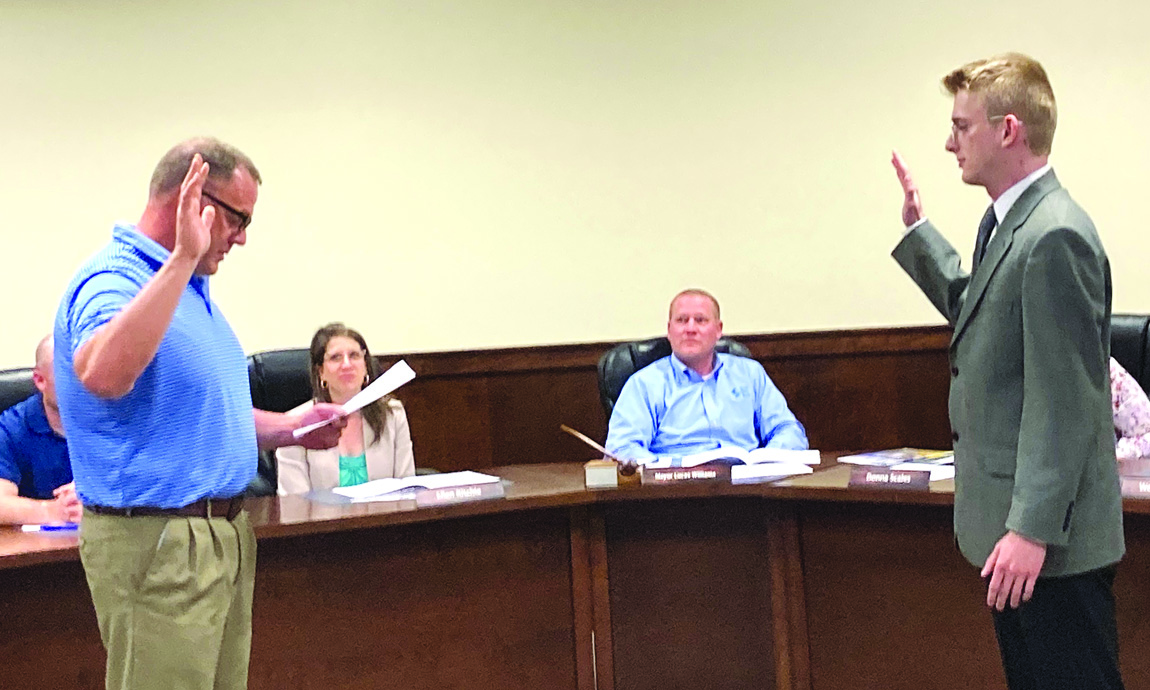 Officer Gaige Floyd (far right) is sworn in as a new police officer at the Mt. Zion Police Department during the May Mt. Zion Village Board meeting. Delivering the oath is President of the Mt Zion Police Commission, Brad Allen.

Officer Floyd is from Argenta, Illinois. He went to scoop at Southern Illinois University-Edwardsville where he took every criminal justice class and became interested in pursuing this career. Officer Floyd has family throughout the village of Mt. Zion and his parents graduated from Mt. Zion that led him to applying for the job.

While Officer Floyd was in high school, he talked to an Illinois State Trooper for two hours that started his interest in this career.

“That conversation with her just kind of opened my eyes to everything that all the opportunities available to you and law enforcement once you get your foot in the door and I just saw it as a great opportunity to work in the community work with people and improve my community while also making a living and not many people get to be police officers,” Floyd said.”I think it’s it’s just a great it’s a great profession to get involved with.”

Officer Floyd is just 21 years old and according to Mt. Zion Police Chief Adam Skundberg, he is one of the youngest guys the department has ever hired. Chief Skundberg is excited for the energy that Officer Floyd will bring.

“Anytime you hire somebody that young, it kind of just kind of brings in a new energy,” Chief Skundberg said. “I know got a background too and that he’s done some stuff like drug counseling. So that is a bonus too.”

Officer Floyd started academy training a few weeks ago, but the reality of a career goal being achieved didn’t hit him until he went to get his equipment and uniform.

“There’s a little bit of culture shock and it was very strange at first,” Officer Floyd said. “It didn’t quite hit me until we went to get equipment for me and my uniforms made and then it all kind of hit me. It was like oh wow, I really got this. I’m not just not just doing a ride along, I’m not just here and I think I’ve acclimated really well to the environment and you know, all of the other officers and staff that have been great. It’s a great feeling to be here.”

Officer Floyd hopes to get a good base knowledge in his friar year on the job from his fellow officer and be proficient at the basics of his job. He also wants people to know that he has always been family and community oriented. Even from going to Argenta to Mt. Zion Floyd will put everyone in the community first and put their needs ahead of his.

Chief Skundberg said that the process for Officer Floyd will be 14 weeks at the academy and then he will be with another officer for a few weeks before he takes on his own shifts.

“We try to have a pretty big learning curve,” Chief Skundberg said. “So our guys when they do get out on their own they’ve got all the tools that they need, but basically just kind of getting used to the lay of the land. He’s from Argenta originally. So he’a going to have to learn the area geographically and get his feet wet, talking to people and you know, businesses and things like that.”

Chief Skundberg said the biggest advice he can give to Officer Floyd is to be flexible.

“The hours are kind of crazy,” Chief Skundberg said. You learn to deal with some of the more difficult issues over time. Just like every new officer we hire, we just really want them to kind of be open to learning new things and kind of learning just the job in itself in that first year.”