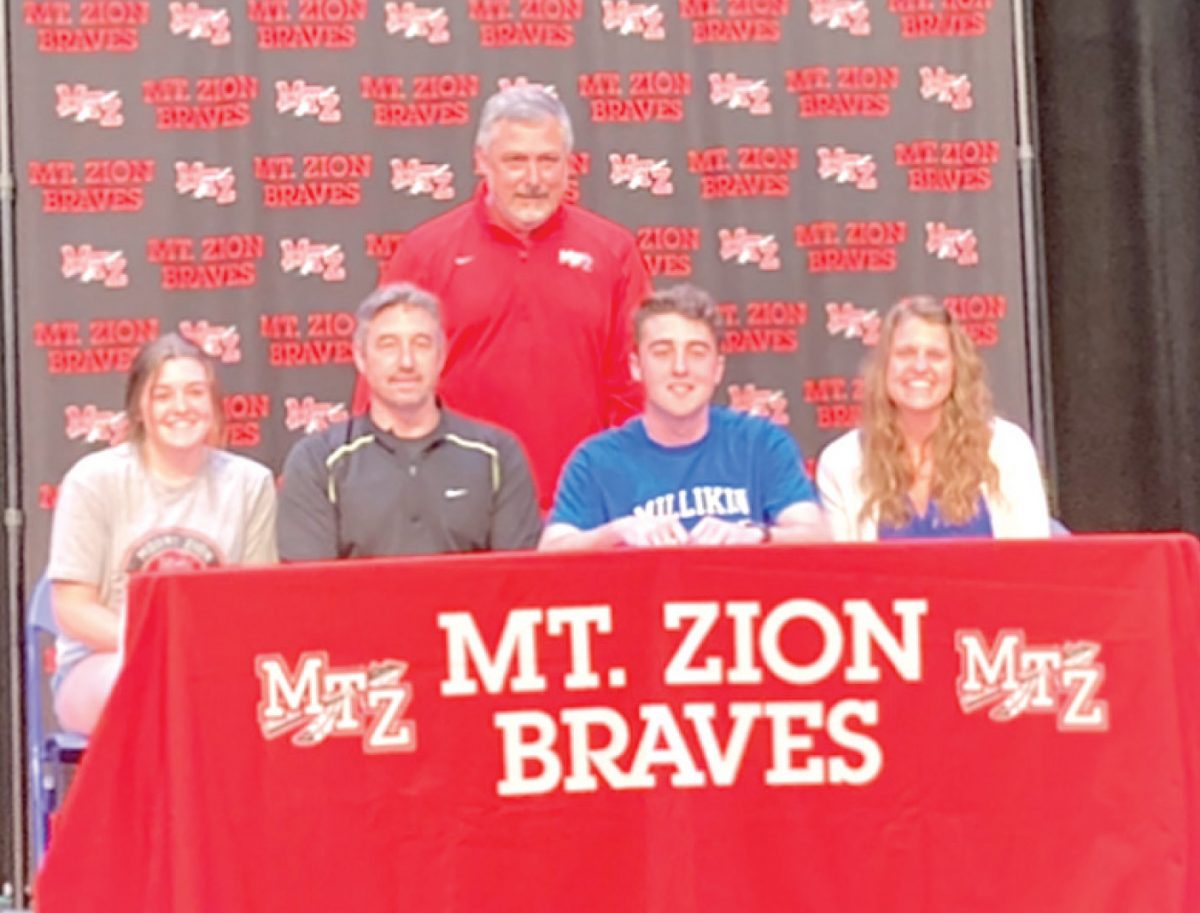 Rylee Gower after signing his letter of intent to play tennis next year at Millikin University surrounded by his family and Coach Roberts.

Mt. Zion boys tennis senior Rylee Gower has signed his letter of intent to continue his tennis career at the next level at Millikin University next year

Gower played all four years at the varsity level for the Braves in tennis. In his senior year, Gower served as co-captain alongside Lane Fehrenbacher. Head coach Mike Roberts said that Gower is the voice of the captainship and that he took the reins from the get go.

“Leadership isn’t something that’s given, it has to be taken,” Coach Roberts said. “Leadership is something that you either take or you don’t take it. Well, he’s taken it and he’s run with it this year and a lot of these guys look up to him, especially the younger players because he’s always there encouraging. He’s always there getting people together, rallying, rallying the team when we need to rally, and he does it without me most of the time. It doesn’t take me saying hey, we need people to go down here. We need to go people over here. He’s usually doing it on his own. So that’s kind of a nice thing.”

Coach Roberts said that Gower didn’t play much tennis before his freshman year of high school. Gower started playing tennis due to Fehrenbacher as his best friend. Coach Roberts described him as an athletic freshman that was all over the place that had the drive and wanted to be a real tennis player.

“He made a decision that he was going to be a player and he had never taken any lessons or anything like that,” Coach Roberts said. “He has developed himself into the second best player on my team in just a matter of two or three years. Rylee Gower is the epitome of what you want, what you want for your future. I usually tell people if you have never played before that it doesn’t matter. What level do you want to play the game and that you want to play at a high level you want and to compete at a high level. Some people don’t, a lot of people never make that decision. But Riley did and he went after it and he’s definitely reaping the benefits.”

Gower chose Millikin university after talking to a few coaches, but the director of tennis Alex Covington welcomed him and as he met the team he felt a connection. Another reason is that Millikin is known as a great school to study business management which is Gower’s major.

Gower wants to take the ethic of hard work and playing hard to the next level.

“In every sport I’ve learned to play hard, and that’s something that I did all four years here,” Gower said. “So I’m going to take that into college and play as hard as I can and take nothing for granted.”

Gower’s athletic goal for his freshman year of college is to contribute something to his team and be a good teammate. Academically he wants to get good grades.

Coach Roberts’ last words of advice to Gower is to continue his work ethic and that college tennis is at a decent level.

“I think he’s gonna have a great college experience on the tennis court,” Coach Roberts said. “I can only see him getting better and I hope he sticks with it. It’s gonna be fun that he’s close and that we may be able to still see him play.”

Grower’s going to cherish and miss the most about being brave is the camaraderie between his teammates and coaches.