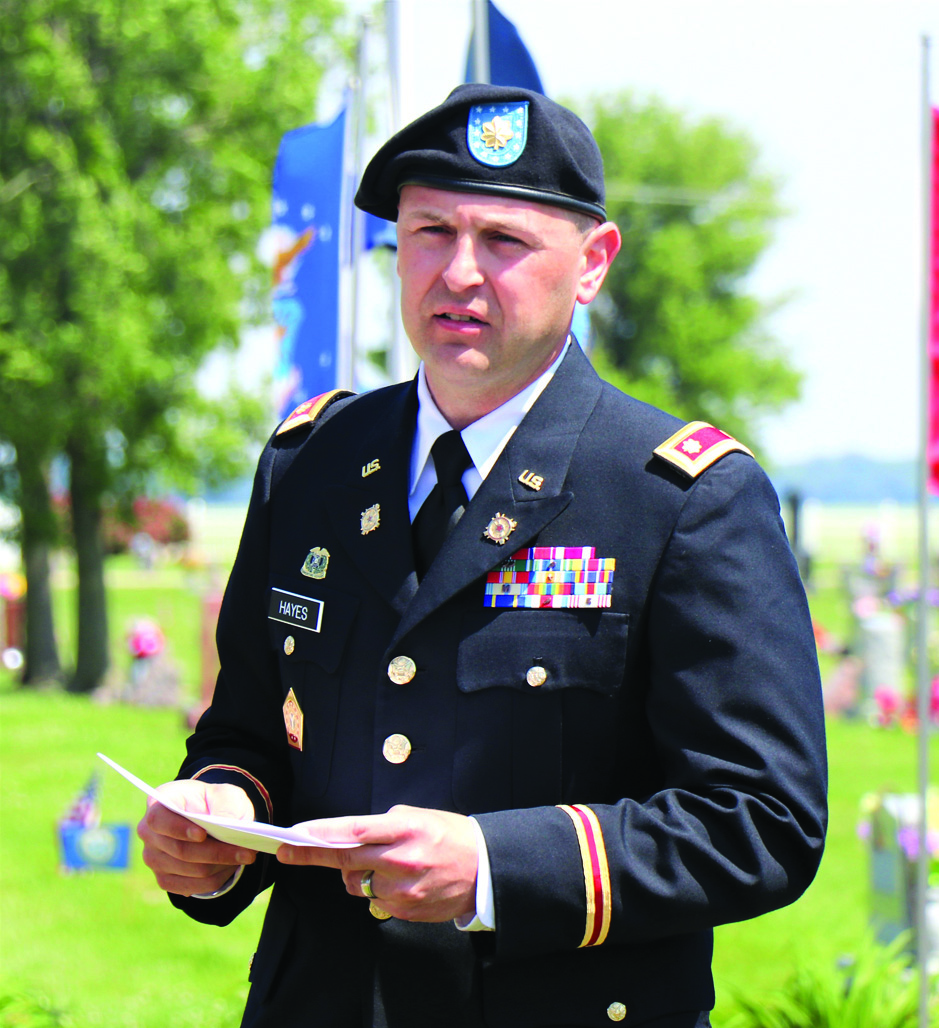 Major Russell Hayes was the guest speaker at this year’s annual Memorial Day Service held Monday, May 30 at the Arthur Cemetery.

He began by welcoming veterans, current services members, families, friends, and Arthur community members and gave a special thank you to any Gold Star family members in attendance and stated the rest of us are grateful for your resolve, courage, and sacrifice.

For those unable to attend the service here is his speech in its entirety.

“I would also like to thank Mr. Steve Jurgens, the Arthur American Legion, and Arthur Veterans of Foreign Wars for putting this ceremony together and for asking me to speak today. The military is not only profession, it is my passion. I am Major Russell Hayes, a full-time member of the Illinois Army National Guard, and currently serve as the Executive Officer for the 766 Brigade Engineer Battalion, located in Decatur, Illinois. I was born and raised in Arthur and I am humbled and privileged to be able to speak on this sacred day,” he said.

Major Hayes continued, “The concept of Memorial Day can be traced back to when Illinois Congressman John A. Logan left the U.S. Capitol in Washington D.C. to serve in the Civil War. Logan grew up in Murphysboro, Illinois and volunteered to serve with the 1st Regiment of Illinois Volunteers. Logan would go on to become a General. After the war he worked with Veterans Affairs to establish the first Memorial Day in 1868. At that time, the day was called Decorations Day in remembrance of those killed during the Civil War. Exactly 100 years later, in 1968, Congress officially made the last Monday of May a federal holiday in remembrance of all Veterans who gave their lives. This day would officially be titled Memorial Day.”

He stated, “Memorial Day for me, is a day of reflection and profound gratitude for the men and women I have had the privilege to serve with and those who gave their life. More than one million, 275 thousand Americans have died in conflicts since the Revolutionary War began in 1775. Since World War I over 50 thousand Illinois service members have died and at least 23 of those service members were from right here in Arthur. These number are very small compared to the millions of Americans who live free every day because of these men and women. For over 250 years’ service members have been fighting for our nation’s independence, freedom, and security. That fighting still continues today. Soldier still die to sustain freedom.”

“But why? …why must there be sacrifice? …why must Soldier continue to give their live in the name of freedom? The answer is simple, but harsh — liberty is not freely gained or preserved, it must be constantly safeguarded,” he said.

Hayes added, “I’d like to share the words of the late General Colin Powell, former Chairman of the Joint Chiefs of Staff, National Security Advisor, and Secretary of State. In reference to service members who die in battle, General Powell stated, “Their sacrifice in the name of peace and freedom have made this nation what it is today. By their sacrifice, they give us our strength. We the living must ensure that their sacrifice was not in vain.”

“Today we gather to remember heroes who made the ultimate sacrifice for our nation…unfortunately way too many to name to be spoken today but I would like to take a moment recognize a few heroes from here in Illinois.

Heroes like SGT Gerrick Smith of Sullivan, IL who died 28 July 2009 while deployed to Afghanistan. SGT Smith was assigned to the Illinois Army National Guard’s 2nd Battalion, 130th Infantry Battalion located in Marion, IL. He was survived by his parents, Marilyn Smith and David Jones, a sister and half-brother.

Heroes like Staff Sgt. Joshua Melton of Carlyle, Illinois, who died 19 June 2009 from wounds sustained when his vehicle was hit by an IDE in Afghanistan. Staff Sgt. Melton was a member of the Illinois Army National Guard’s 33rd Infantry Brigade Combat Team. He was one of five Soldiers that served in a Marion, Illinois unit who was killed during that deployment. He was survived by his wife and one-year-old daughter.

Heroes like Staff Sgt. Ivory Phipps of Chicago, who died in a mortar attack 17 March 2004. Staff Sgt. Phipps was a member of the Illinois Army National Guard’s 1544th Transportation Company in Paris, Illinois. The 1544th lost five Soldiers during their 2004 Iraq deployment. Staff Sgt. Phipps was survived by a fiancé and four children, including a five-month-old son,” Hayes said.

He told those in attendance, “Today, we remember and honor all the 23 heroes from Arthur, IL. These brave men gave the lives in the name freedom.

“Today, thankfully, we live in a different time and not as many of us have experienced the loss of a service member. A service member that is a loved one, a father, mother, son, or daughter. Memorial Day for many is just an opportunity to enjoy a long weekend, enjoy our first day at the pool or lake, or even take advantage of the big sales at the mall or online shopping. As we enjoy the long weekend, we should be ashamed of ourselves, if we forget the men and women who died serving our county or those continuing to serve so Americans can remain safe and free,” Hayes stated.

Hayes added, “Today, this ceremony is our opportunity to stop, remember, and honor our service members that gave the ultimate sacrifice…their lives.”

“As we remember our fallen, I also ask you to remember those men and women who currently stand against our enemies to carry freedom’s torch in foreign lands. We must also remember those veterans who continue to live with physical, mental, and spiritual challenges in the aftermath of these wars,” he said.

Hayes continued, “Today, on this Memorial Day, I challenge you to look inside your hearts to find the true meaning of the word ‘memorial.’ What is a memorial, but a fitting tribute intended to celebrate the memory and honor of a person? How shall we celebrate the men and women who dedicated their lives to cultivating and harvesting the most precious crop known to man……..freedom? Should we hang our heads; we should we weep; be quiet or reserved. Absolutely not, we should proclaim and publicly praise their labors by showing our respect and celebrating their service.”

“And then, and only then, should we freely enjoy the weekend with gratitude. Those who fought for us, who fought for our lives and liberty, they would be honored that we celebrate all the things for which their sacrifice provided us. One of the easiest ways to show your gratitude is to simply say ‘thank you’ to a Veteran or current service member,” Hayes commented.

In closing he said, “I leave you with this quote from General George S. Patton, ‘It is foolish and wrong to mourn the men who have died serving this county. Rather, we should thank God that such men lived.”

“Once again thank you for allowing me to speak today. It is truly a humbling honor to be a part of this ceremony.”