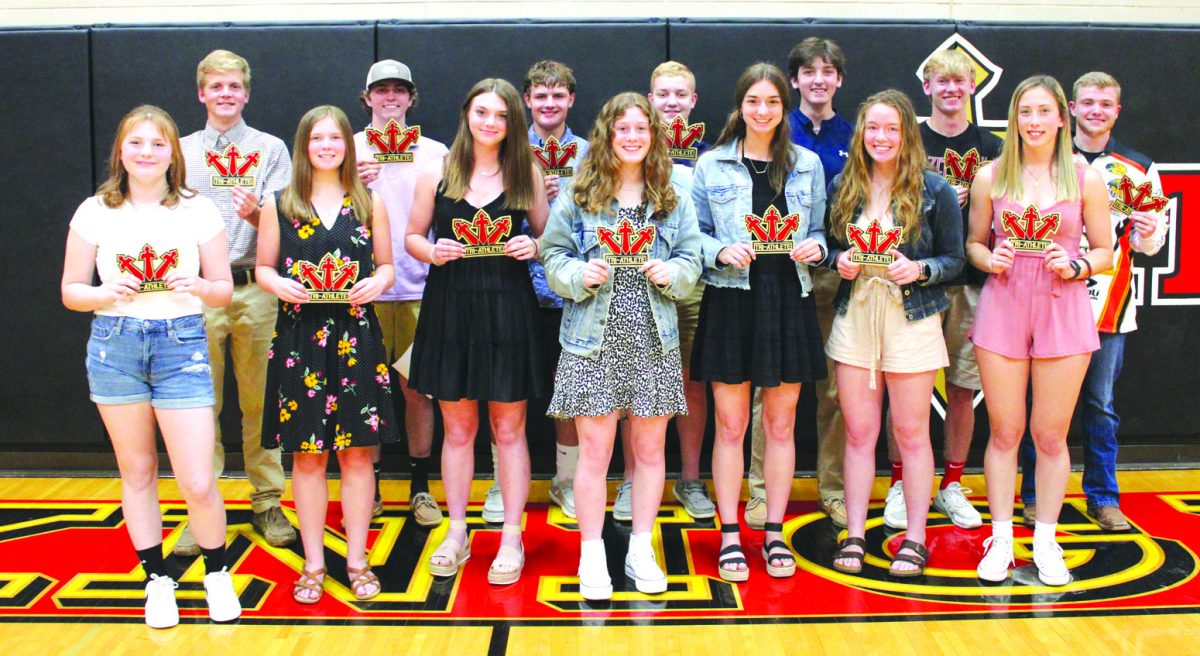 A new award was given at the ALAH Spring Sports Awards Night – The Tri-Athlete Award was presented to those student athletes who participated in three sports in the 2021-22 school year. Those available for the picture are front row: Kori Klay, Lindsay Rohacs, Mackenzie Condill, Kailee Otto, Charley Condill, Kaci Beachy, and Alexa Miller. Back row: Jace Green, Quentin Day, Maddix Stirrett, Ryan Appleby, Clay Seal, Landon Waldrop, and Payton Rawlins. A complete list of the winners of this award is in the article about awards night.

ALAH High School held their Spring Sports Awards Night on Thursday, June 2. Athletic Director Mr. Nathan Seal opened the program saying “tonight gives us an opportunity to look back on the accomplishments of our baseball, bass fishing, softball, and boys and girls track programs this past season.” The spring season on the whole was a successful one, rich with participation, victories and championships. All the teams had a common goal of becoming the best they could be. They all had highs and lows but the student athletes were taught lessons and had experiences they would carry with them the rest of their lives. Everyone worked hard and represented their school and communities in a way we could all be proud of. “Congratulations on a successful spring season.”

Before giving his thanks to the people that helped throughout the season, Mr. Seal thanked the group of students that had worked cleaning up and painting in the weight room that day. Mr. Seal then had some special thank-yous—to the parents for their support and all the countless things you do; to the coaches for their energy, passion and commitment; Miller Bus Transportation; the high school faculty and the Board of Education; Mrs. Schrock, Mrs. Martinez, and Mrs. Seegmiller in the office for everything they do; Mrs. McGrath, Mrs. Creek and Mr. Cheek in the unit office for their help and guidance, the media outlets including the Arthur Graphic Clarion & Record Herald News, News Gazette, Herald & Review, WCIA and WAND for their coverage this season, the maintenance staff for getting facilities ready, and last but certainly not least, the student athletes. It was a pleasure to watch them compete and perform.

The coaches of each sport then gave a summary of their season and announced the Knight Award winner for their respective sport.

First up was baseball Head Coach Tracy Hood who stated it was his first year and he wanted to thank Coach Brad McGill his assistant who was more like a co-coach. He also thanked volunteer assistants Logan Brough and Nik Miller for their help this season. Coach Hood said the baseball team started with 23 players and ended with 18. The season started rainy and cold which limited practice time but they were able to convert the Lovington bus garage into a batting cage which did help. They faced a tough schedule and finished with a 6-18 record but that tough schedule, “only gets you better.”

For his Knight Award, Coach Hood looked for the person who is willing to do anything, represents ALAH on and off the field and is a great community representative. The Baseball Knight Award went to Daylon Stutzman.

Softball Head Coach Jerry Lane was up next. He thanked his assistant coaches Ginny Condill and Jodi Kauffman. Coach Lane said the move from Class 1A to 2A brought schedule changes but as Coach Hood said that would make them stronger and better for next year. The softball Knights finished with a 15-10 record.

For his Knight Award, Coach Lane looked for a person who put out extra effort, did the extra things that needed to be done and stepped in when someone went down. The Softball Knight Award went to Kaci Beachy.

Knights’ Bass Fishing Head Coach Bradley Rexroad took to the podium next and said this was his second year as head coach. He thanked volunteer coach Steven Stroh for all his help. The bass fishing team this year had 14 members and were in three tournaments so far. The weather didn’t cooperate just as other spring sports’ coaches had mentioned and the team faced wet and very windy conditions which aren’t good for fishing success.

For his Knight Award Coach Rexroad chose a person who had shown dedication over several years, went above and beyond helping others and has volunteered to help in the future. The Bass Fishing Knight Award went to Hunter Stroh.

Girls’ track was next up for Coach Ryan Jefferson also in his second year as Head Coach. He stated the year had its ups and downs-19 girls out was definitely an up but injuries and illness were a down. They started with an indoor season in January and another “up” for the year was Alexa Miller placing fifth in the 60 meter dash and triple jump at the Indoor Top Times meet in March. He said their goal at the beginning of the outdoor season was to win the Conference meet but they finished third and were disappointed but they regrouped for Sectional just three days later and said they just wanted to have fun and give it their all. They put together an all senior 4 X 1 relay that medaled and ran a PR and also a 4 X 2 relay that also medaled and had a PR. It was a fun and positive way to end the regular season. Coach Jefferson also noted that Alexa Miller qualified for the State meet in the triple jump for the second year in a row and gave him his first experience coaching in a State final when she made it to the final round on Saturday.

Coach Jefferson’s Knight Award criteria are a hard-working, high character, high integrity individual who is not a complainer and willing to do whatever it takes for the team. The Girls’ Track Knight Award went to Emma Edwards.

The last sport to be introduced was boys’ track, whose Head Coach Matt Thomas began by talking about their successful season which also saw ups and downs. Injuries that sidelined two of their better athletes, Kaden Feagin and Reggie Edmonds, even before the season started put a damper on their high hopes but it still turned out to be a great season. The boys were undefeated against any Class 1A teams they faced through Sectional. Their one loss was to 2A St. Joe Ogden at the Spartan Classic.

Despite illness at the Lincoln Prairie Conference meet to again two of their best athletes, Logan Beckmier and Landon Waldrop, they still repeated as Conference Champs. Back to back Sectional titles was a nice finish to their regular season. Coach Thomas said three athletes, Logan Beckmier, Jace Green and Max Allen qualified for State in every running event that didn’t have hurdles. Max Allen took second in the 400 meters and broke the school record in that event twice, once in the prelims and then shattered it in the final running 49.28.

Each sport then went to separate areas to further discuss their seasons and hand out sport specific awards. Those can also be found with the pictures elsewhere in the paper.

Mr. Seal closed the group portion of the program by thanking everyone for their attendance tonight and their support of the ALAH athletic programs.