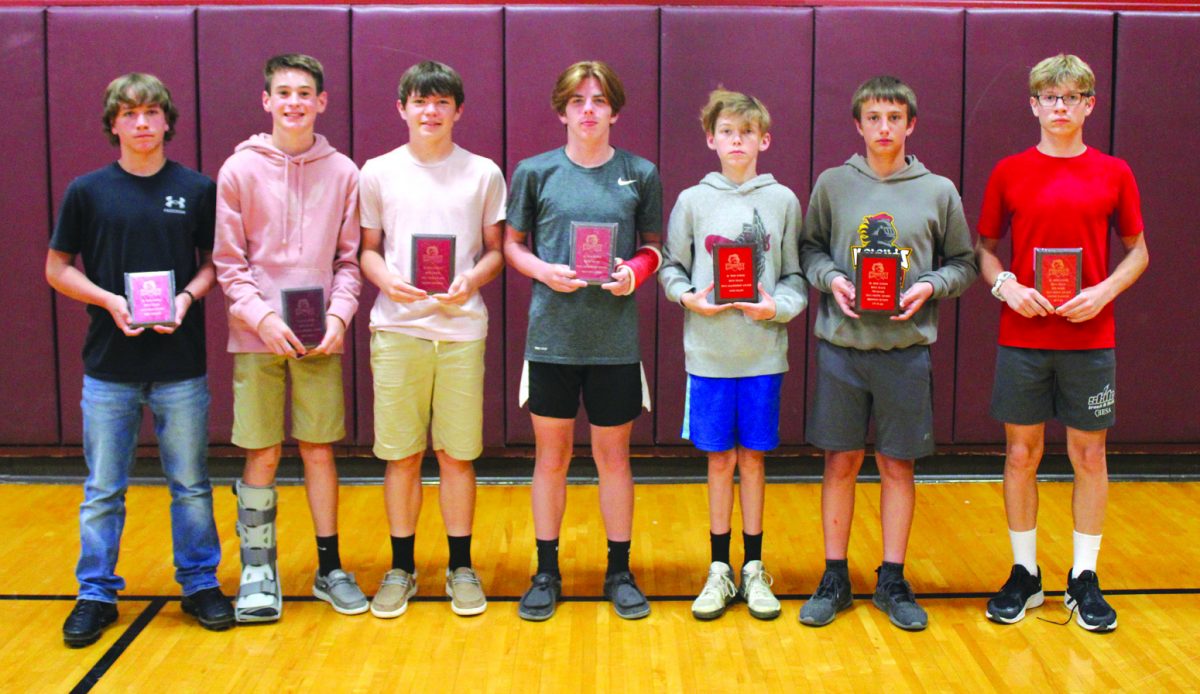 Head Boys Jr. High Track Coach Don McCarthy led off the program with thank yous to parents, administration, administrative assistants, especially Eilis Martinez for her part in getting the certificates ready and picking up the awards, Athletic Director Nathan Seal, maintenance crew, teachers, clerks Josh Stack and Derik Eaton, David McGrath and Shawn Vanausdoll for their help and donation of starting blocks from the Youth Sports Association, the Athletic Boosters for their help with payment for motel rooms for state and the many meet helpers. He gave special thanks to Assistant Coach Melissa Hopkins and Girls Coach Bryton Ragon for all their help this season.

Coach McCarthy then spoke about his team and stated that track is both an individual and team sport and it is challenging and also most times their biggest competition is themselves. He also mentioned how he looked forward to this season as a more normal season. Coach then had his state qualifying athletes stand and be recognized for their conduct at the state meet this past weekend. He said they were one of the best if not the best behaved group he had taken to state.

Coach then introduced his 7th grade squad which includes both sixth and seventh graders, who improved as the season went along and they gained experience along the way to develop their full potential to be the best athlete, student and person they can be. The 7th grade team was 11-9 in triangular, quadrangular and pentangular meets and in the larger multi-team meets took first in the ALAH Invite, third at Arcola’s Invite, tenth at the large Mt. Zion Invitational and were second in the Conference meet.

Coach McCarthy then gave out his Special Awards. The Points Award goes to the athlete in each grade that scores the most points during the season. Brennon Hutson won the award for the seventh grade and Payton Warrior scored the most points in the eighth grade. The Team Award is given to the athlete that is unselfish, has a good work ethic, is coachable, sets a positive example and is consistent. Trey Strode and Easton Frederick, who also was a recipient of this award last year were presented plaques for the Team Award. The last award for the boys was the Leadership Award, given to the athletes that lead by example and also verbally and help their teammates become better. Cruz Hale, Brayden Leech and Coye Grant received this award for the 2022 season.

Coach McCarthy then spoke about the eighth grade team. They were 19-1 in regular season meets. The eighth graders were first at their own Invitational, first also at Arcola’s Invite, fifth at Mt. Zion, second at the Jr. High Okaw Conference meet, and seventh at Sectional. He introduced the five eighth graders that qualified for the IESA State meet. They were Easton Frederick, Justin Schrock, Daylon Doggett, Cash Hale, and Payton Warrior. McCarthy stated that this group did a good job representing their schools and communities, they were hard workers, coachable and very competitive.

Coach Bryton Ragon then began the girls’ portion of the program. Coach Ragon said it was a phenomenal year and he couldn’t be more proud of his teams this season and that just like being an educator the best part is seeing just how far they come from the beginning of the season to the end.

Coach Ragon then introduced his eight state qualifiers, Ruby Burton, Alex Clark, both eighth graders, Leighton Poulos, Sophie Monts, Cassidy Rohacs, Brookelynn Peeler, Brynlee Moore and Embery Reardon all seventh graders. He spoke of their accomplishments at the meet and their competitiveness that showed throughout their events at state and during the entire season.

The above sixth grade members and the following seventh grade girls made up the seventh grade Knights track and field team and they won the ALAH Invite, the Arcola Invite, Conference and the IESA Sectional meet.

Coach Ragon then handed out his Special Awards. His Points Award winners were: seventh grade, Leighton Poulos and eighth grade Ruby Burton. He listed these qualities for his Team Awards – excel at practice and meets, work hard and have a drive to be better. Team Awards went to Anabelle Vanausdoll and Skyler Graham. His Leadership Awards were presented to Addi Rohr, her second consecutive one and Brookelynn Peeler for their drive, competitiveness and ability to push others to be better.

The Jr. High track teams would like to thank everyone for their support throughout the 2022 season.