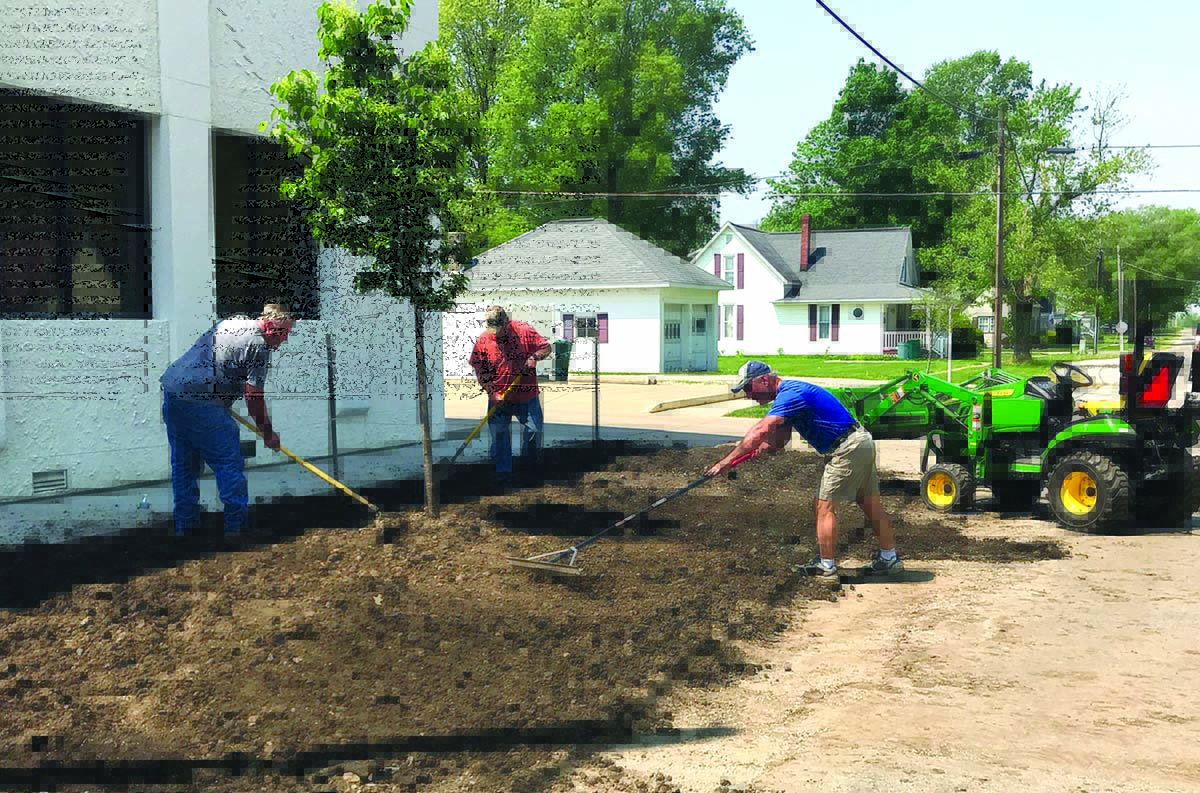 There is a lot of work to be done within a village, small or large. Village President Bill Fleming right, is joined by Allen Kilber and Dave Ard, trustees, in assisting with work around town. The men worked hard in getting the area on the north side of the bank in better shape and grass seed planted. Edging will be added when the re-paving of downtown is done.

It’s official, the Village of Atwood is the owner of the former Atwood Kirby Building. Village President Bill Fleming made the announcement on Monday, May 9, at their regular meeting. The paperwork has been completed making the ownership official.

Fleming stated the board needs to advertise for quotes to renovate the building to suit their needs.

Amanda Barbee was introduced by President Fleming as the new village clerk and collector to replace Nancy Wierman. Nancy is retiring the first of July.

The Atwood Police Department will re-locate to the Sav-Mor building where it was located before Sav-Mor came to Atwood. Davis Construction has been contacted to begin the renovation to the police building at their earliest opportunity. Fleming has also contacted AJ Graphics to obtain window vinyl to place on all windows/doors to block vision from the outside and to provide signage for the police department.

In last week’s newspaper was an article regarding village ordinance violations. The village board is taking these violations seriously and would appreciate Atwood village residents to abide by them. Village Attorney Kenny Crossman has prepared and sent letters to the owners of eight (8) properties to inform them of the issues and to request clean-up or a suitable resolution prior to the village issuing ordinance violations.

President Fleming stated, “With the re-paving of the two blocks downtown likely to happen this summer, it would be a prime opportunity to begin improvements to the boulevards in the business district. My recommendation will be presented to the board at the June meeting.” Farnsworth has sent the Motor Fuel Tax documents to IDOT and the board is waiting on their approval before proceeding to the next step of obtaining bids for the re-paving project.

Fleming announced Ryan from Farnsworth is still checking on the grant to see if it would be something that the board can consider for a sidewalk to Dollar General.

The board discussed the FY2022-2023 budget. This will be presented for approval at the June meeting.

The board approved the purchase of a new mower and tractor from Sloan Implement. Allen Kilber made a motion to purchase a JD O-turn diesel mower and a tractor with mower deck and small loader for a total of $25,197.30 w/trade-ins.

Trustee Ron Wallace explained some of the improvements being discussed for the Atwood Park. Ideas discussed were:

2. Place2x6 treated lumber on the inside of the fence to keep the balls in the field.

3. Get quotes to re-do all four dugouts.

4. The board is waiting on grant money for purchase of additional land for park expansion.