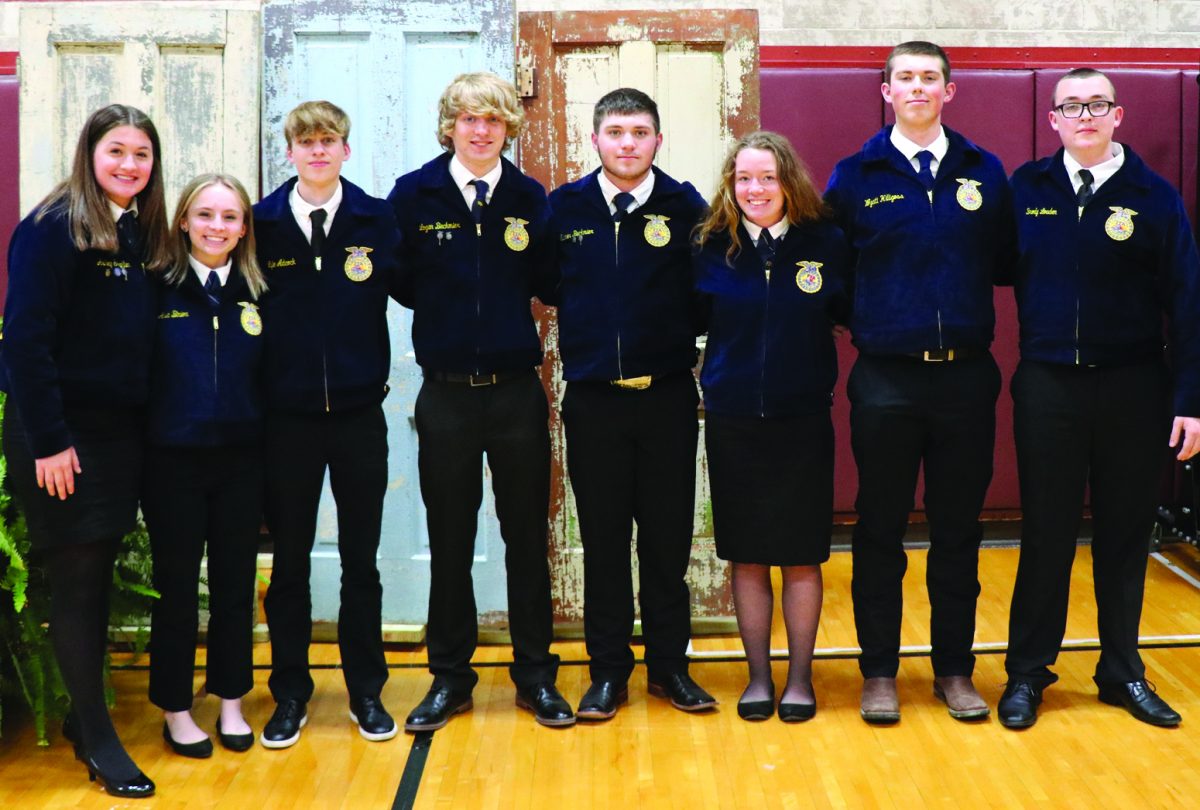 The ALAH FFA chapter held its annual awards banquet on April 28 at the Arthur Lovington Atwood Hammond High School. During the evening, many awards were handed out, and the new FFA officer team was installed.

The evening began with President Jace Green welcoming everyone and the opening ceremonies presented by the 2021-2022 FFA officer team. Following the meal, the award ceremonies and special recognitions were presented along with the FFA Creed, presented by Ava Binion.

The CDE report to recognize those members who had competed in the Career Development Event competitions this year was given by FFA Advisor Megan Beckmier. Members participating in these events must think critically and make rational decisions on specific situations that relate to curriculum areas in Agricultural Science and Ag Business.

Advisor Beckmier said, “What a year it has been. We have slowly returned back to normal in everything we have done regarding FFA and our contests. I am so pleased with the way our members have competed in these contests, and how much they have learned along the way.”

She continued, “I am super excited to see where we will go next year and what these members will do.”

This year the ALAH FFA teams competed in 4 major Section CDE competitions. Members receiving recognition along with certificates were:

The FFA officers presented the degree ceremonies for the Greenhand, Chapter, and Honorary Chapter FFA degrees.

The Chapter FFA degree was presented to one member, and it is for second and third-year members who have excelled in their chapter and have earned their Greenhand degree. Brody Louden received his Chapter Degree along with a silver pin.

Mrs. Beckmier recognized a few members that had gone above and beyond her expectations for the year.

Winning the 2020-2021 Most Active Award was Tanner Beckmier, accumulating the most points for participating in various events over the course of the school year.

The Star Greenhand Award recipient was Mackenley Bowles, which is presented to the top greenhand or first year member.

The last award she presented on the evening was the Chapter Star Farmer. Logan Beckmier was this year’s recipient and is based on the chapter member who has an outstanding Supervised Agriculture Experience (SAE) in production agriculture and demonstrates the most involvement in all phases of the chapter’s activities.

Historian Logan Beckmier recognized the senior FFA members along with their parents and each received a gift and a banner.

The last item on the agenda was to install the newly elected 2021-2022 FFA Officer team. The officers are as follows: Logan Beckmier, president; Tanner Beckmier, vice president; Lyle Adcock, secretary; Kaci Beachy, treasurer; Ava Binion, reporter; and Wyatt Hilligoss, sentinel.
Ashley Seegmiller was elected as junior advisor. Some of her duties will include informing prospective students and parents about FFA along with instructing new students in leadership, personal development, and to help prepare students for involvement in contests and awards program.

Brody Louden was appointed to serve as the chapter’s farm manager. His duties will be to work with the Alumni to care for and tend to our FFA Land Lab.