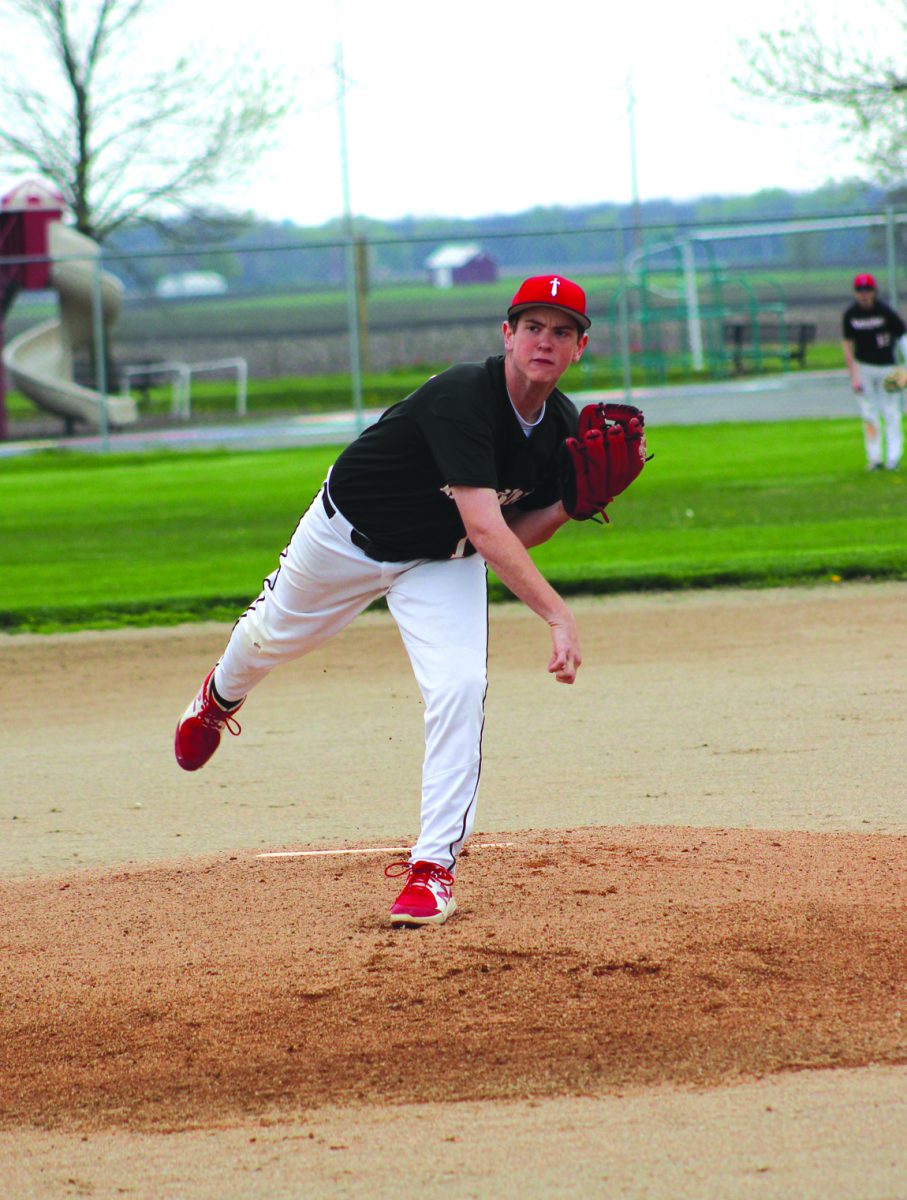 ALAH’s Braden Kauffman, starting pitcher for the Knights in the home game against Cerro Gordo Bement throws a pitch in the first inning of the game on April 28. Braden pitched an excellent game going five innings giving up just three hits, no walks and had seven strikeouts in the Knights’ 1200 victory.

The Knights got things moving in the first inning, when Dalton Vanausdoll doubled on a 1-2 count, scoring one run.

The Knights scored nine runs in the third inning. Benedict, Grant, Binion, Seal, and Kauffman each had RBIs in the frame.

Benedict took the win for the Knights. The pitcher surrendered zero runs on three hits over four and a third innings, striking out three and walking zero. Binion threw two-thirds of an inning in relief out of the bullpen.

The Knights tallied two home runs on the day. Seal went for the long ball in the third inning. Vanausdoll went deep in the fifth inning.

Arcola Varsity Purple Riders fired up the offense in the first inning. Helmuth grounded out, scoring one run.

A single by Maddix Stirrett in the third inning was a positive for Arthur Lovington Atwood Hammond Varsity Knights.

Thomas pitched Arcola Varsity Purple Riders to victory. The pitcher surrendered zero runs on two hits over four innings, striking out ten and walking zero. Beau Edwards threw one inning in relief out of the bullpen.

Quentin Day took the loss for the Knights. The pitcher lasted three innings, allowing four hits and six runs while striking out five.

Day and Stirrett each collected one hit to lead the Knights.

Tyson Lewis had ten chances in the field, the most on the team.

Braden Kauffman threw a gem on Thursday for the Knights, allowing zero runs and besting CGB Broncos by a score of 10-0

The Knights got things started in the first inning. Dalton Vanausdoll hit a solo homer.

The Varsity Knights put up three runs in the fifth inning. The rally was led by a walk by Clay Seal, by Maddix Stirrett, and an error on a ball put in play by Casey Benedict.

One bright spot for CGB Broncos was a single by Hutchcraft in the second inning.

Dick took the loss for CGB Broncos. The bulldog went four and a third innings, allowing ten runs on eight hits and striking out five.

The Knights launched one home run on the day. Vanausdoll put one out in the first inning.

The Knights totaled eight hits in the game. Vanausdoll and Hunter Grant all managed multiple hits for the Knights. Grant and Vanausdoll each managed two hits to lead the Knights. The Knights was sure-handed and didn’t commit a single error. Grant made the most plays with seven.

The Knights improve to 6-14 overall this season.