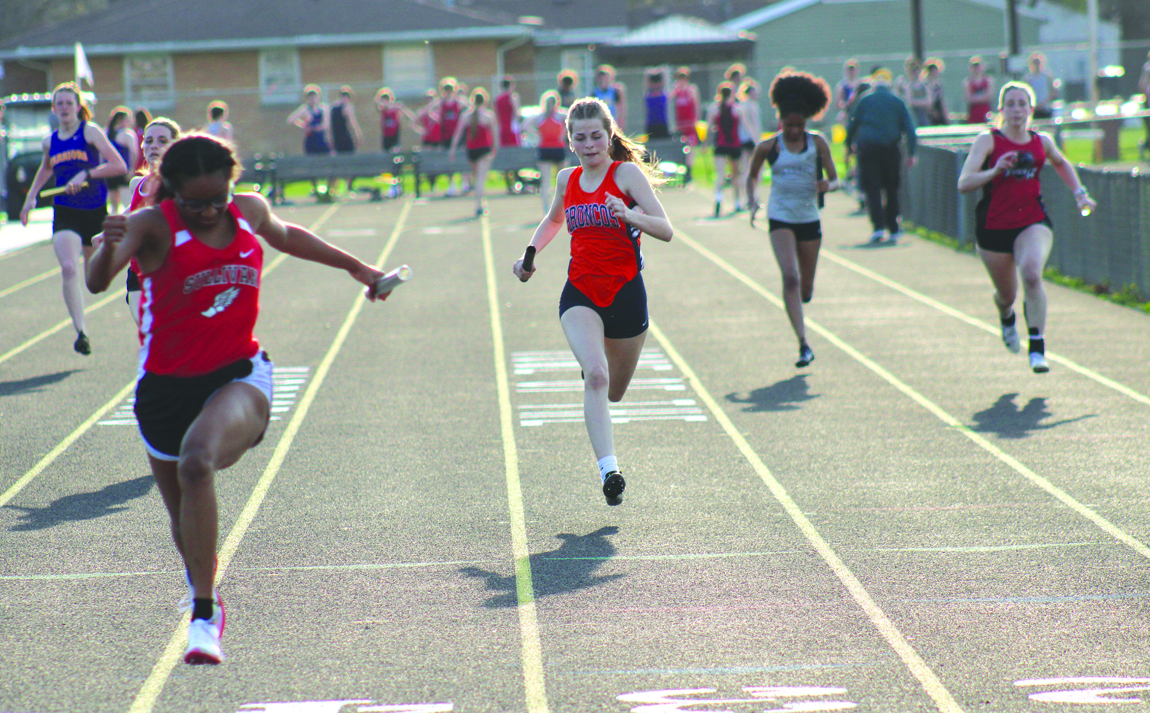 CGB sophomore Caroline Hill in lane 3 sprints to the finish line as the anchor runner in the girls’ 4 X 1 relay at the Tuscola Open on April 22. The other runners on the relay were Bella Zigler, Haley Garrett, and Haylei Simpson whose time of 53.48 was good for second place in the relay.

The Open is always highly competitive with some of the top athletes from around the area.

For a change the weather, although a little breezy was some of the warmest seen this season. As a result of the nicer weather several personal records (PR) were recorded.

The Lady Broncos tied with Marshall for third place with 66 points, just narrowly missing second. Hosts Tuscola won the girls competition with 103 points with Salt Fork taking second with 68. A total of 13 girls’ teams scored in the meet.

Scoring for the CGB girls’ team were Jazzi Hicks who brought home two first place finishes in the shot put/10.97m (PR) and the discus/31.93m. Earning the other first place for the ladies was the 4 X 4 relay team of Haylei Simpson, Reese Brunner, Caroline Hill and Haley Garrett who ran a 4:27.12 in their winning effort. Second place finishes were earned by Bella Zigler, long jump/5.04m (PR) and the 4 X 1/53.48 relay team of Zigler, Garrett, Simpson and Hill. Trinity Stroisch took fourth in the high jump/1.42m as did Gabby Block in the 300 meter hurdles/55.13 (PR) and the 4 X 8 relay of Mariah Corpus, Brunner, Ali Walker and Stroisch. Rounding out the scoring for the girls were three fifth place efforts in the 4 X 2 relay/2:02.69 which was run by Zigler, Walker, Bailey Walter and Hill, Gabby Block in the 3200m/15:56.91, and Haley Garrett in the triple jump/9.52m.