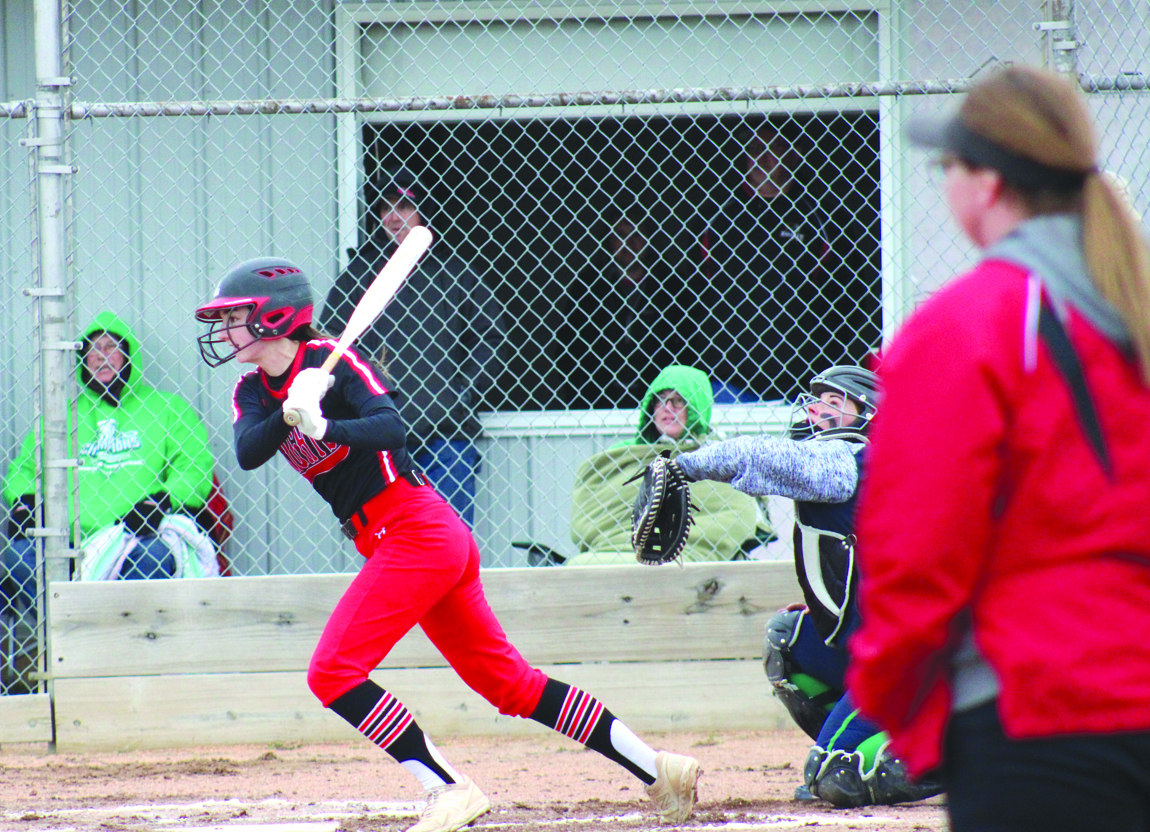 Charley Condill, lead off hitter for the Knights got the game against W-S-S started off right, getting a hit in her first at bat. The Knights had a big first inning, scoring 5 runs and taking a 5-1 lead after one. Charley and her sister Mackenzie led the way for the Knights with four hits each in the game.

The Knights softball team managed to get four games in at home last week despite the rainy weather. They defeated Tri-County on Monday, lost to Windsor/Stewardson-Strasburg on Tuesday, defeated Okaw Valley Friday, and Saturday blew out MacArthur.

A six-run first inning led ALAH to an 11-1 victory on Saturday. The offensive onslaught by the Knights was led by Mackenzie Condill, Kailee Otto, and Charley Condill, who all drove in runs.

The base paths were crowded in this high-scoring game as they collected 14 hits and Okaw Valley had nine.

The Timberwolves scored first in the game, but the Knights evened things up at one in the bottom of the first inning when Frederick singled on a 2-0 count, scoring one run.

They captured the lead in the second inning when Alayna Plank singled on the first pitch of the at bat, scoring one run.

The 14 hits on the day came from Frederick, Beachy, Charley Condill, Otto, and Plank as they each managed multiple hits in the game. Frederick went 4-for-4 at the plate to lead the team.

ALAH lost despite out-hitting Windsor/Stewardson-Strasburg 16 to 14.

The Knights captured the lead in the second inning when Cheyenne Chupp tripled on a 1-2 count, scoring two runs.

Maddie Schweighart took the loss surrendering 14 runs on 14 hits over seven innings, striking out one and walking one.

The Knights had 16 hits in the game. Mackenzie Condill, Charley Condill, Kaylee Otto, Alisha Frederick, and Cheyenne Chupp all managed multiple hits. Condill and Condill each collected four hits to lead the team.

Kaylee Otto drove in six on three hits to lead theKnights past Tri-County 18-8 on Monday. Otto drove in runs on a single in the first, a home run in the third, and a triple in the sixth.

There was plenty of action on the basepaths as ALAH collected 21 hits in the contest.

Tri-County got things moving in the first inning, when Luth grounded out, scoring one run.

The Knights scored six runs in the second inning. The offensive onslaught by ALAH was led by Cheyenne Chupp, Charley Condill, Alisha Frederick, and Ryli Kauffman all driving in runs in the inning.

The Titans scored three runs in the third inning.

Maddie Schweighart got the win allowing six hits and five runs over four innings, striking out four. Layla Deel threw two innings in relief out of the bullpen.

ALAH tallied two home runs on the day when Chupp went for the long ball in the second inning and Otto had a dinger in the third inning.

Luth took the loss for Tri-County allowing 14 hits and 13 runs over three innings, striking out two and walking zero.