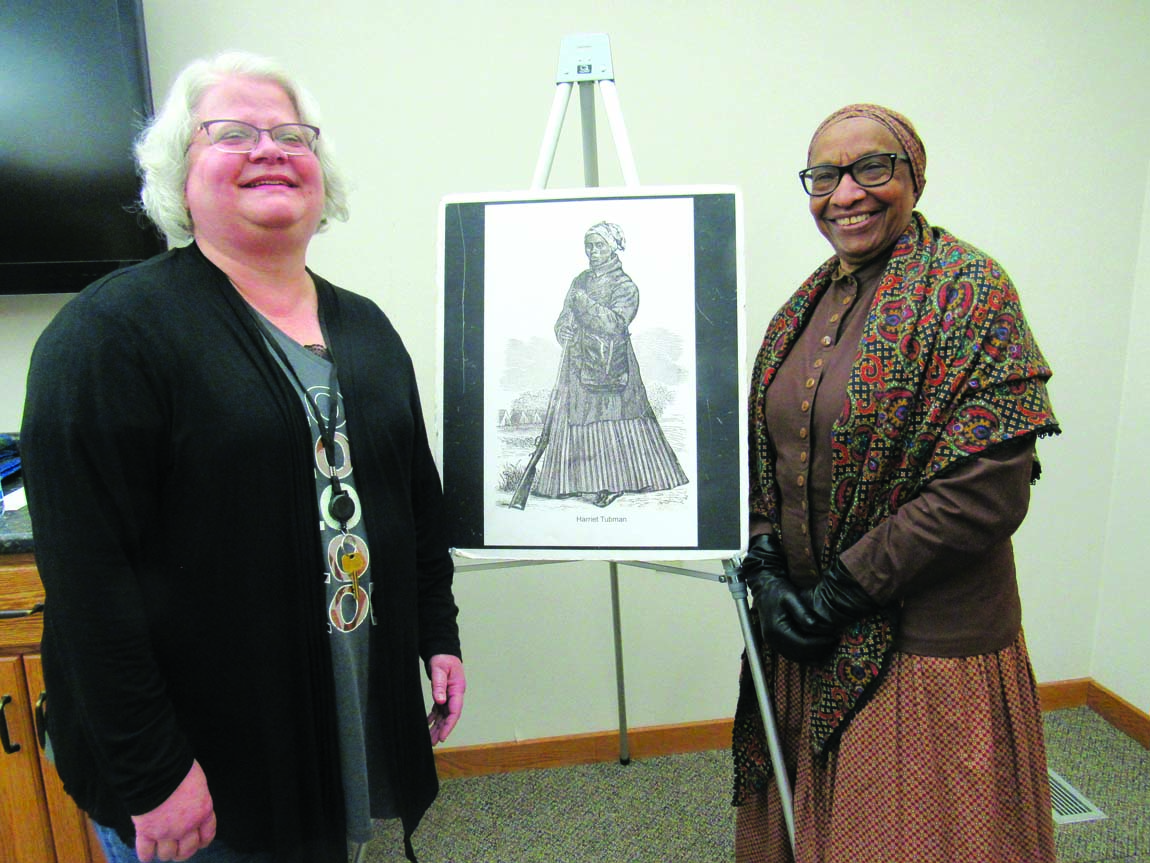 Dawn Robinson, Arthur Public Library staff and head of programming for the library, is pictured with Harriet Tubman, also known as Kathryn Harris. The print shown can be found in the foreword of one of the first books written about Tubman and her life.

The meeting room at the Arthur Public Library was at nearly full capacity on Saturday afternoon, April 2. Those in attendance were there to hear Harriet Tubman (aka Kathryn M. Harris) share the story of her life and her work in the Underground Railroad. In this excellent and remarkable portrayal, the audience learned what life was like on a Maryland plantation in the 1830s and how Harriet came to the decision to run away from her master and be free. Those words ‘free’ and ‘freedom’ frequently and enthusiastically peppered the conversation. Once free herself, Harriet decided to help others obtain their freedom including her own brothers and their families and eventually her parents. Although the exact number of how many she helped is not known, Harriet repeatedly used the word ‘scores’ as a way to emphasize that there were many, many who she ‘conducted’ over the years through the Underground Railroad up until the end of the Civil War earning her in some quarters the title ‘Moses’ because of her efforts to set her people free. In the course of all these adventures, she became friends with Frederick

Douglass and was a great admirer of John Brown and especially Abraham Lincoln, or Father Abraham as she called him. Harriet shared many stories about her life and work but also answered many questions from the audience. After her work with the Underground Railroad and once the Civil War was over, Harriet opened a home in Auburn, New York for those slaves who had nowhere else to go, letting them live their lives out there partly through the generoisty of her fellow citizens of Auburn. She died in that home in 1913.

Kathryn Harris lives in Springfield and retired in 2015 as the Library Services Director of the Abraham Lincoln Presidential Library after more than 25 years of service in the library system. She was the first woman and the first African American to serve as the President of the Abraham Lincoln Association since its inception in 1909. She has a masters degree in library science from the University of Illinois. Besides Harriet Tubman (her favorite), Harris also portrays Jarena Lee, the first female preacher in the African Methodist Episcopal Church; Phoebe Florville, wife of William Florville, Abraham Lincoln’s barber; and Elizabeth Keckley, seamstress and confidante of First Lady Mary Lincoln. Contact the library if you are interested in a presentation for your school, civic group, church or social group and they will put you in touch with Kathryn.

The Arthur Public Library has regular programming like this one for the public. Please contact Dawn at the library for more information as to when these events are taking place. Call 217-543-2037.