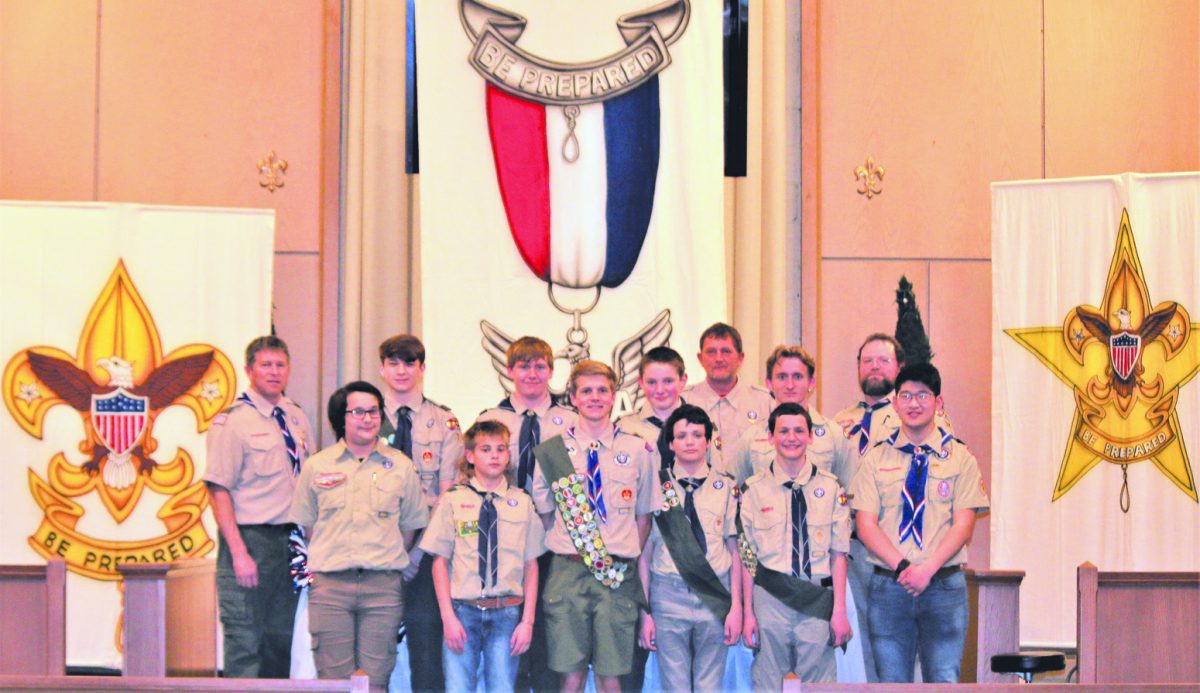 Master of Ceremonies Scout Nolan Schrock asked the color guard to present the colors followed by leading everyone in the Pledge of Allegiance and led the scouts in reciting the Scout Oath.

Nolan welcomed everyone and officially declared the court of honor convened. Pastor Jill Bunker then delivered the invocation.

Scout Master Brian Holt opened the ceremony by stating scouting is no doubt one of the greatest organizations in the world to foster the highest ideals of citizenship. “What does the Eagle Badge represent? It means a scout has set a goal and worked to achieve that goal. The Eagle

Scout stands for strength of character. The Eagle Scout badge is a symbol of what a boy has done but, more importantly, it represents what the boy will be in the future as he grows into manhood.,” he stated.

Bruce Weiman, former Arthur United Methodist Church Pastor, was the guest speaker stating it was an honor to be present for Jace’s Eagle Court of Honor.

“As a pastor and chartering organization’s representative, I’ve been involved in many boards of review in several towns. We would always have them repeat the Scout’s Oath and Law and often asked something about the scout’s understanding of one Law or another, or which they thought was most important. Trustworthy was always a good bet, but that last one, reverence is not such a big deal any more as nobody picked it as the most important,” Weiman said.

He went on to say, “In our culture, reverence has mostly lost its meaning and importance. You have learned, however, through scouting, that reverence and “morally straight” are not buzz kills at all, but actually enhances the fun.”

In closing, Weiman congratulated Jace on his achievement and feels sure he will continue to be a sterling example for these scouts to follow.

Scout Master Brian Holt then described Jace’s climb along the Eagle trail starting when a boy first becomes a Boy Scout, then becomes a Tenderfoot Scout after they completed certain requirements and continues through Second and First Class ranks. The path is marked with merit badges, leadership responsibilities, service projects, and the practice of Scouting skills and ideals. The trail continues as they reach Star Scout followed by Life Scout and finally, Eagle Scout.

The ceremony continued with Holt asking Jace to repeat the Eagle pledge after him and Monica Green then pinned the Eagle on Jace’s uniform. He then presented his parents Monica and Justin Green both with miniature Eagle pins.

A reception followed with light refreshments in the fellowship hall.