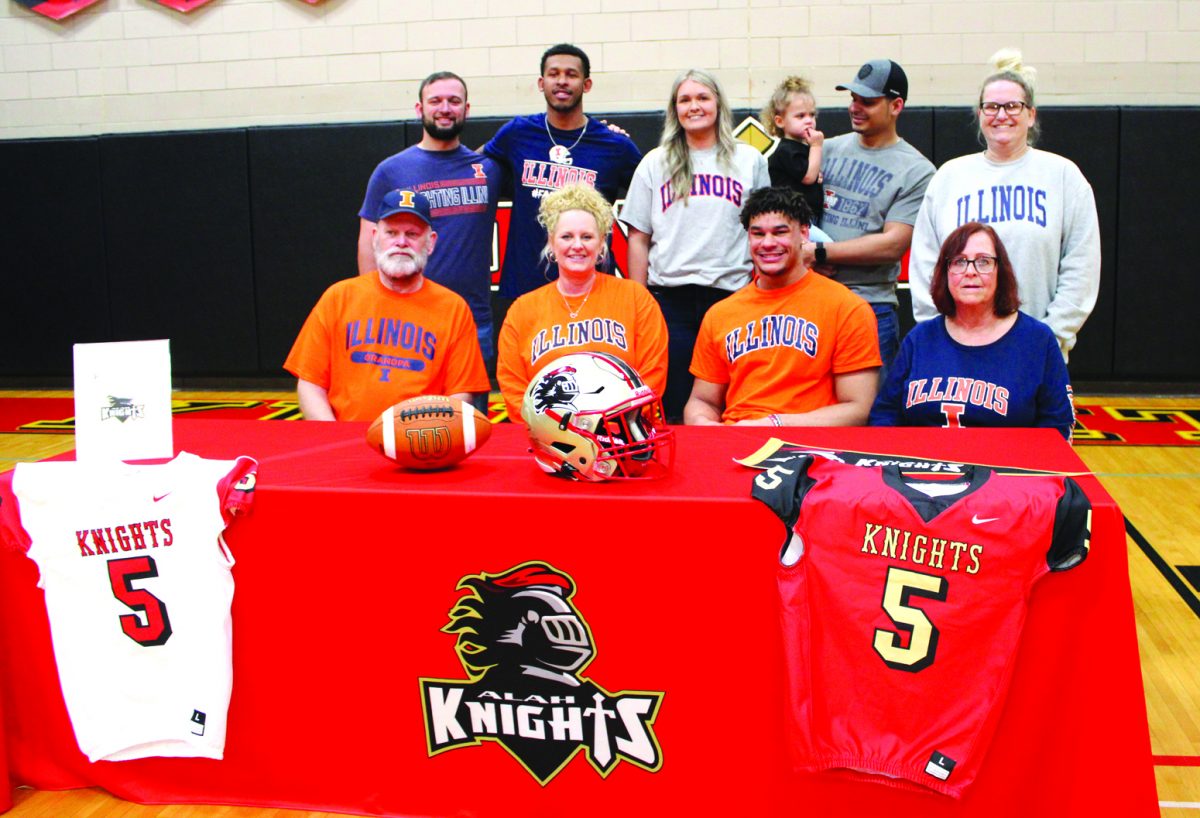 On Wednesday, March 23 in front of family, friends, teachers, teammates and several members of the media, ALAH junior Kaden Feagin celebrated his 18th birthday in a BIG way, committing to continue his academic and athletic participation at the University of Illinois at Urbana-Champaign.

Heading into his senior season at Arthur Lovington Atwood Hammond High School, Kaden has been a 3 year varsity letter winner in football and has been an instrumental part of the Knights winning campaigns the past three seasons.

As a freshman, he earned LPC All-Conference Second Team at running back and was named to the Herald and Review and News-Gazette All-Area Honorable Mention Teams.

Kaden has been a multi-sport athlete throughout his high school career and has also earned varsity letters in basketball and track and field.

In basketball, Kaden earned LPC All-Conference Honorable Mention as a freshman and LPC All-conference First Team as a sophomore.

In track, Kaden placed 2nd in long jump at the 2021 IHSA Track and Field State Finals.

In addition to his athletic accomplishments, Kaden is an honor roll student and has maintained a 3.68 GPA throughout his high school career. Kaden is the son of Jennifer Feagin of Atwood and has not declared a major.

Mr. Seal then gave the microphone to Kaden who had this to say, “I want to thank my mom and my family, my coaches and teachers for helping me get better and be a better person, and my teammates for pushing me. This decision wasn’t easy, it took a lot of time and talks with my mom and my family. It’s time to move on and commit to the University of”, here Kaden and his family stood and revealed their Illini gear to loud cheers from all in attendance.

After pictures with family, teammates, and friends and signing a few autographs, Kaden sat down to talk about his commitment. He said, “I always dreamed of playing for Illinois since I was a little kid, being close to home and the family atmosphere there” was also a factor in the choice. His visit to the Fighting Illini basketball game vs. Iowa and meeting Coach Brad Underwood also played a part. “Coach Underwood and Coach Bielema have a good relationship” and it appealed to him in terms of turning the football program around like the basketball program has done, “I want to lead the class, show everybody in the state in my class that this is the place to go.” Kaden is Illinois football’s Class of 2023 first commit.

Kaden chose to have all those who attended come up front to stand behind him as he made his commitment. “The whole community, it feels like, they’re behind me and my family, of course but it definitely means a lot for them to come out and support me.”

His current football coach Ryan Jefferson is looking forward to a big season for Kaden and his team. He had this to say about Kaden, “it’s just been amazing to work with him, just to see his drive. Kaden has worked hard his whole career. It’s nice for a coach when the best player on your team works the hardest because it trickles down and the younger kids see. This is a big day for him and our school.”

Coach Jefferson also posted this message to Kaden on the Knight Pride football facebook page, “Kaden, it has been so enjoyable to work with you the past few years. Even though you will physically be gone after next year, your presence in the program will remain; your efforts, dedication, and character are all examples of what our student-athletes should strive for. You have inspired young men and women to work hard and reach their goals. Go be great in everything you do!”

The communities of Arthur, Lovington, Atwood, and Hammond are very proud of Kaden and all his achievements thus far and look forward to watching him finish his high school career and his future endeavors at the University of Illinois.