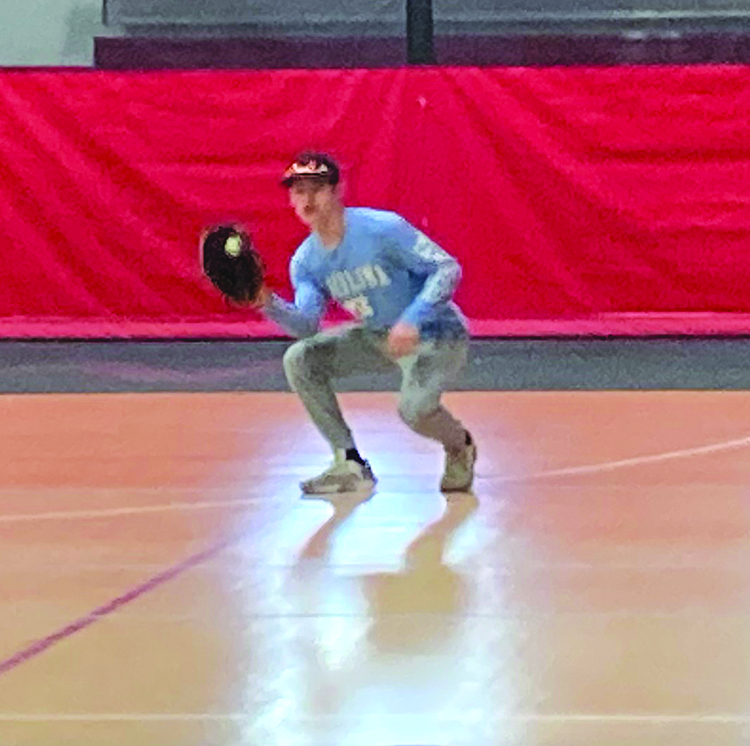 Sam Driscoll catches a ball in practice at the Mt. Zion Fieldhouse.

The Mt. Zion baseball team will be under new leadership this season. JD Arnold takes over at the helm and as the head coach of the baseball team as just the fourth head coach in the program’s history.

Last year it was more practicing before a game or in a game since there were frequent amounts of games during the week.

In the offseason, Coach Arnold has brought in a new philosophy of hitting and has worked on that and fundamentals in the beginning of the season.

Coach Arnold said that senior Ethan Hamrick will be the go-to-guy this season for the Braves. Hamrick is relied upon as a leader and the spokesperson for this team.Coach Arnold has worked with Hamrick for four years and wants him and his other seniors to set good examples.

“They know how this program runs,” Coach Arnold said. “They’ve been in it for four years now. As I said, this is my first year so I’m kind of asking them questions about things. So a little bit of guidance from them as well.”

Hamrick has embraced the leadership role and has relayed information to him from the team and vice versa.

“I’ve been playing varsity baseball for a while,” Hamrick said. “So I know what to expect. We have a young team and I’m one of the older guys so I feel like I should be the guy.”

Hamrick is already committed to a college baseball program and wants to have a fun senior year and win as many games as the team can. Hamrick wants to be remembered when his time is done with the baseball program as a good player and also as a guy who always tried his best and tried to do the right thing. A team goal for him is to win a regional.

“We’re going to be young. So I know it may start out rough, but I think we can make a deep run and maybe to win a regional would be a good team goal for us.”

Coach Arnold expects some freshmen to step up for his team also. Sam Driscoll will be expected to contribute on the mound and on the field. Jackson Beiler will also be expected to have a higher amount of playing time as a freshman.

“So we’re looking for a couple of freshmen and younger guys to step up,” Coach Arnold said. “It’s kind of a youth movement going on this year.”

Coach Arnold and the team’s goals for this season are to be above .500 overall record and contend and possibly win a regional championship.

“That’s the whole goal is to get the regional championship and get a plaque and go from there,” Coach Arnold said. Once you get in the game, you never know what will happen . So we got to get in the game first.”

Coach Arnold wants the readers and community to know that his team will work hard and will not be outworked.