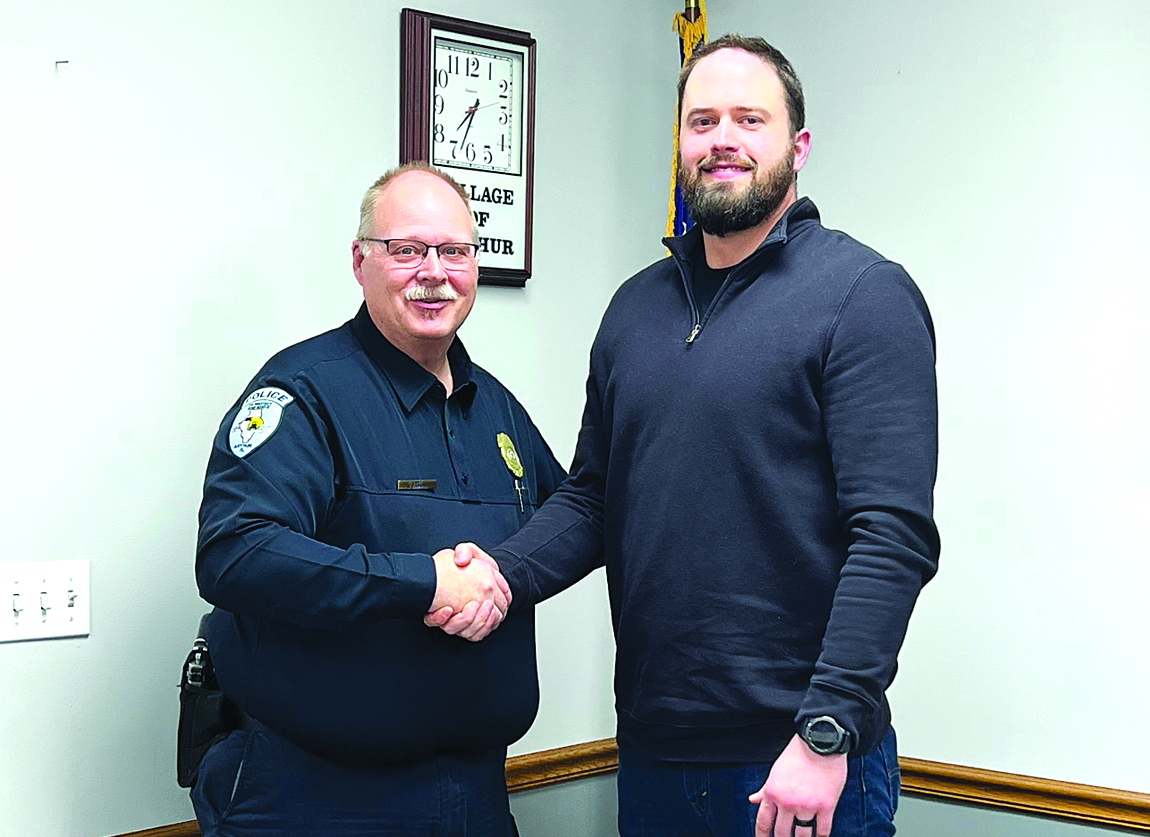 Police Chief Mike Goodman welcomes Elliott Tinnon back to the department as a part-time officer. Tinnon previously worked for the village from 2015 to 2017.

Rev. John Stewart (representing the Arthur Rotary Club) came to speak about the annual firework show at the most recent meeting of the Arthur Village Board. He thanked everyone for their help with last year’s event. The show was successful even though there were two attempts to put on the fireworks and attendance had been down about 20-30%.

Stewart informed the board that this year’s fireworks are scheduled for Saturday, June 25. Captain Rat and the Blind Rivets will be performing again and there will also be wristbands available for early purchase. The rain date is scheduled for the next day.

After discussing the fireworks, the expenditures were approved with the largest expenditure being $65,089 paid to the Farnsworth group.

Chief Michael Goodman stated that he would once again be working with the local veterinarians to start the trap and release program for the stray cats this spring. He hopes to get it started within the next few weeks. Goodman said he also hoped to try to do it while there were college students interning to cut down on costs, etc.

Part time police officer, Elliott Tinnon was hired to the village. He had previously worked for the village from 2015 to 2017. Tinnon is currently still certified. It was recommended that he be hired as part time for $28/hour. A motion was made and passed to hire Tinnon, who was also sworn in that same evening.

Chief Goodman also reported to the board that the present interview room was in need of an upgrade. He noted that the department is at a point where more things are requiring audio and video for interviewing suspects and victims, etc. Presently, the interview room has been unable to record both audio and video and they have had to travel to a different facility to perform interviews. Goodman collected some bids which included work on the ceiling to have it lowered-(putting in a drop ceiling), lowering the light and doing work on the HVAC. A new grid system will also be installed. A motion to upgrade the interview room as well as installing new software for audio and video was made and passed.

A couple of different layout schemes to paint the water tower were presented to board members.

After viewing and discussing the available schemes, it was decided that the tower will remain red and white, and “the village of” will be added so that the tower says, “The Village of Arthur,” which will be seen from both the north and south sides.