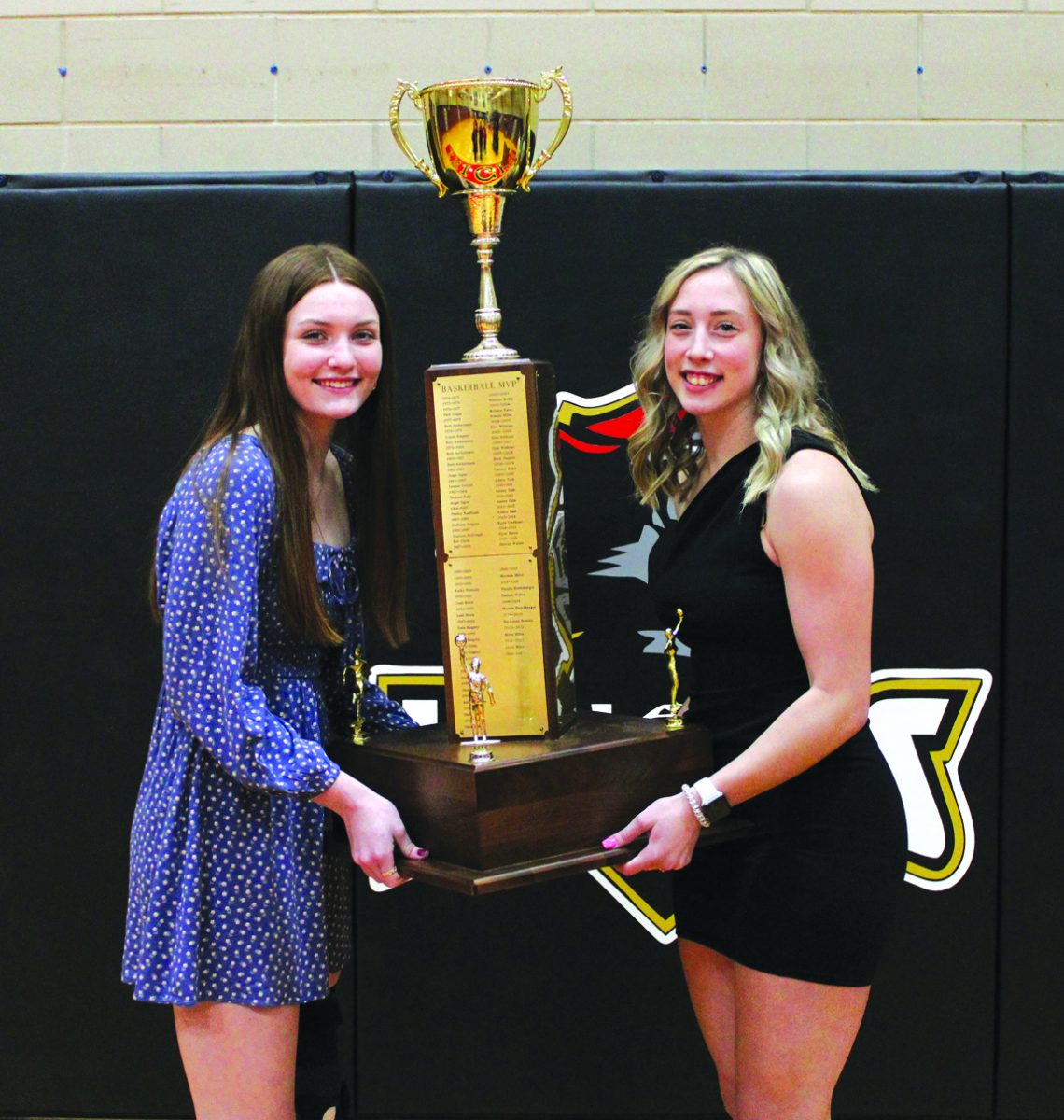 Claire Seal, left, a sophomore and Alexa Miller, right, a senior on the ALAH Knights Girls basketball team were selected as Co-MVPs for the 2021-22 season. For Alexa this makes her a two time winner as she won the same honor last year. For many years the girls did not have a trophy but it was given several years back. The basketball plate dates from 1974-75, the first year of girls sports and the first name is Patti Chupp who won the MVP in 1976-77. Some interesting names of note on the basketball side are Steffanie Jurgens, 1985-86, now known as ALAH Principal Steffanie Seegmiller and Dana Kingery, 1993-94 & 94-95, now Dana Tinkle, ALAH P.E. teacher and coach. 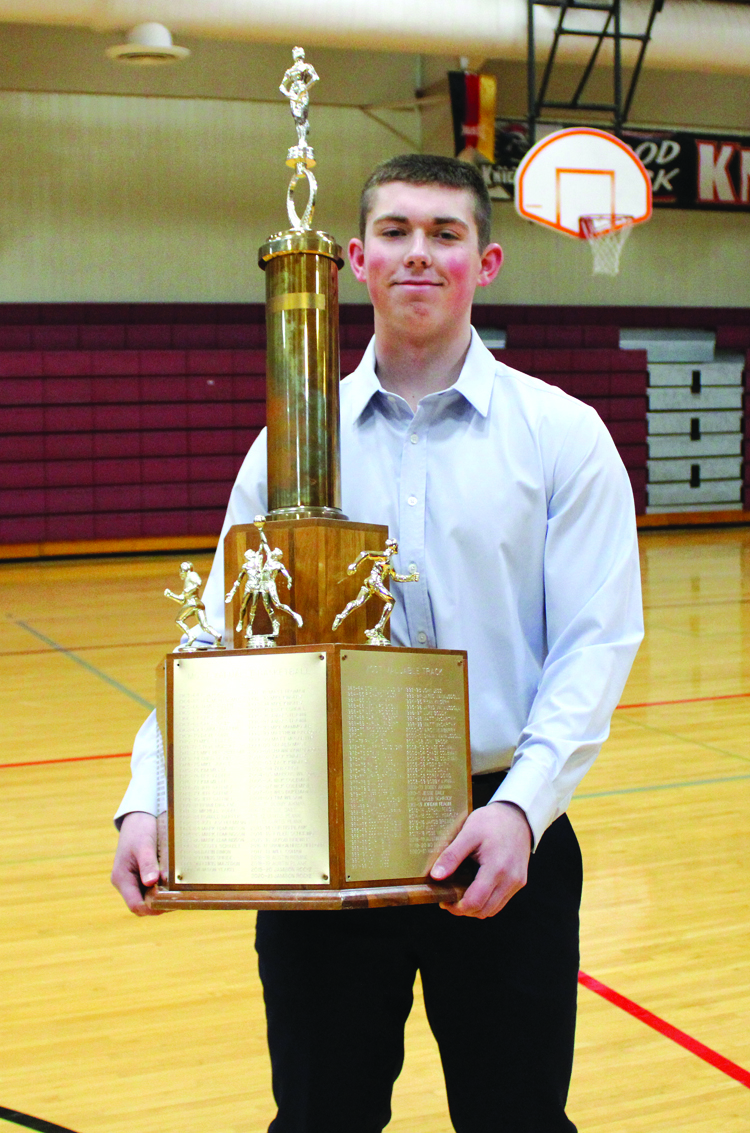 Wyatt Hilligoss, a junior on the Knights boys’ basketball team is pictured here with the Boys MVP all time trophy. Wyatt was selected by his teammates for his outstanding play during the 2021-22 season. The first name on the boys basketball plate is the MVP from 1963-64 is Ron Hood and names have been added each year to the present.

Athletic Director Mr. Nathan Seal opened the program saying tonight gives us an opportunity to look back on the accomplishments of our girls basketball, boys basketball and cheer programs during this past season.

He mentioned the successes of the teams but also pointed out some less obvious ones such as having a full schedule of games; thanks to the Boosters for new basketball uniforms for both boys and girls; the cheerleaders cheering at both boys and girls games; improvement to the gym-new scorers’ table, new sideline chairs, updated sound system and new wall pads; successfully hosted both boys and girls IHSA Regionals; the girls team played a lace up for pediatric cancer game and made a donation to that organization; and most importantly our student athletes represented our school and communities in a way we can all be proud of. Congratulations to all the coaches, parents and student athletes on a very successful winter season.

Mr. Seal then introduced Brad McGill, head boys basketball coach for his season summary and to present the Knight Award for his sport.

Coach McGill said that even though the season didn’t pan out like they hoped, he was pleased with the way the boys rose to the occasion with all the adversity and they fought to the end and never gave up. He then gave his thoughts on the Knight Award which caused him to reflect on past winners. He stated that the recipient was at every practice, did everything they were asked to do, did the most he could do at any given time and was the most deserving person he has ever been around. Daylon Stutzman was the winner of the boys’ basketball Knight Award.

Cheer Coach Melissa Nichols was up next and she echoed previous thank yous and added a special thanks to her assistant Brittany Bartley. She talked about the long cheer season that began with tryouts back in April of 2021. She also talked about the Universal Cheerleaders Association Camp that the girls held in the summer and the awards they earned at the camp. Coach Nichols then gave the standards for her Knight Award selection. They included sportsmanship, hard work, doesn’t give up, leadership, represents their school, is a positive light and leader in their community, grades and commitment. The Knight Award for Cheer went to Regann Bowles.

Up next was Coach Mac Condill, Head Coach of the girls’ basketball team. He thanked his assistants, Tracy Hood and Sarah Bailey. For his season summary he said one of the things he was most proud of was that his varsity squad had a 3.76 grade point average! As for the season they were 25-6; listed in the area and state rankings throughout the season; and even though it didn’t end like they wanted, it was a great season. They finished second in the Lincoln Prairie Conference standings and the LPC tourney, won their own Knight Holiday Classic tournament and were a combined 39-8 over the last two years.

Coach Condill then went off script for a bit to talk about a topic that he thought needed to be discussed. He mentioned a young student athlete that just three and a half weeks ago was playing on the very floor he was standing on and now she is no longer with us. A friend of hers is selling t-shirts with the statement, “Everyone you know is battling something you know nothing about”. He just wanted everyone to talk more about the subject and he intends to do that himself.

Coach Condill then presented the Knight Award for girls’ basketball who was competing all the time, a great example, a great ambassador, the most consistent and unflappable. That person was Charley Condill who got her award and a big hug from her dad and coach.

The Lincoln Prairie Conference All Conference selections were introduced and given their certificates.

The three different sports then dispersed to their specified locations for their individual awards.