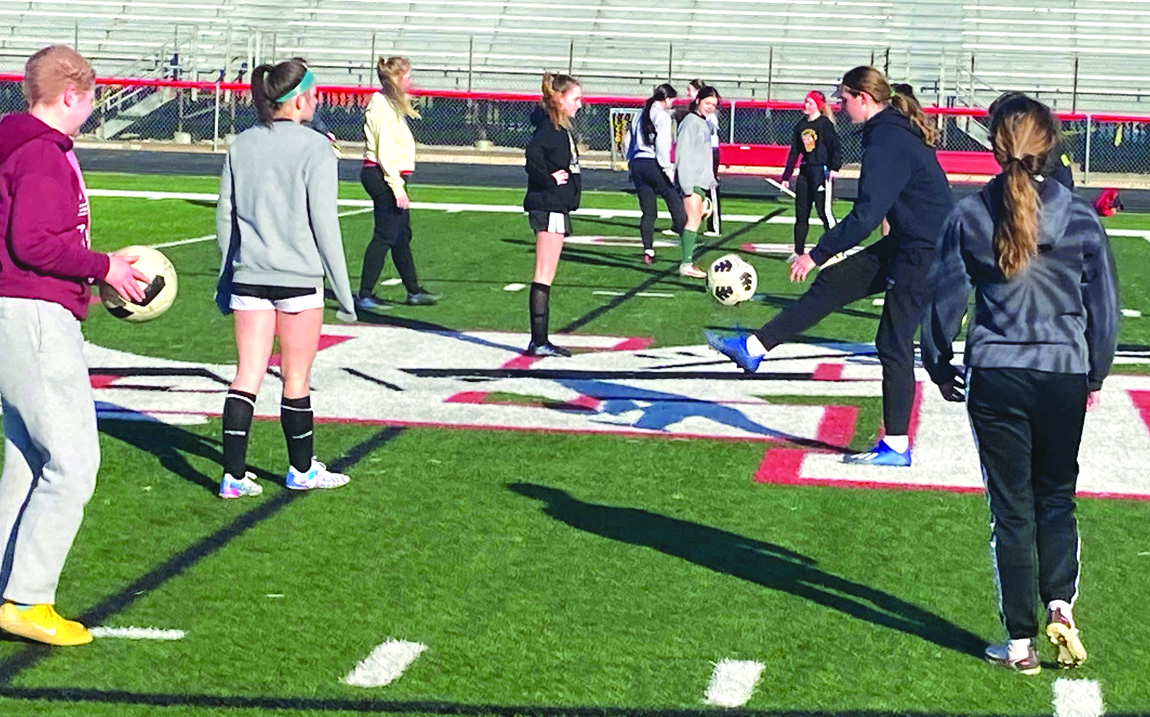 The Mt. Zion girls soccer team during a drill in practice at the Mt. Zion football field.

The Mt. Zion girls soccer team is excited for their first normal season in the last two years. The Braves start their season in the St. Theresa tournament next week.

The Braves are coming off a 14-4 season last Spring, but didn’t have playoffs. The St. Theresa tournament has been canceled the last two years and the Braves are ready for that to begin a normal season.

“We’re excited to get back to the normal season,” Head coach Jonathan Moore said. “Especially for us to start the season with the St. Teresa tournament that we’ve been in for years.”

Coach Moore said he and his team have been working on the first week of practice and in pre-season getting their condition ready for the season.

“We’re just trying, first of all, to get some conditioning, because you have to be in shape to play this game,” Coach Moore said. And get as many touches as we can get, to get the ball at our feet, get as many touches or personal drills that we do, where we’re working on that first touch.

And we really stress communication early and make sure that we’re always talking. We tell them over and over that you can hear the good teams, because you can just hear their communication.”

The Braves are returning all-conference mid-fielder Katie Oliger who Coach Moore expects to have a big season. Senior Wrigley Donahue is expected to have a high goal-scoring season. Senior Macie Fleming will start her season at goalkeeper and see time at defender as well which Coach Moore considers to be a great asset to the team.

Donahue’s individual goal is to possibly make all-Apollo conference first or second team. For a team goal, Donahue wants her team to play as much as they can and get closer as a unit. Donahue wants to be remembered after her senior season as a positive and nice teammate.

Fleming wants to make the most out of her senior season and make it one of the best seasons she’s had as an athlete as this is her last season as a high school athlete. Fleming wants to be remembered as a dependable person.

Coach Moore expects his seniors to be the start of good team chemistry. Coach Moore has noticed his good teams have had good vibes and chemistry that start from the senior class.

The season goal for Coach Moore and his team is to win the Apollo Conference, achieve a winning record and have a shot at winning the regionals.

Coach Moore said the overall message he wanted to send to readers and the community is to come out and watch the team play.

I would just ask them to come out, support us, come out and watch the girls play,” Coach Moore said. “I understand when it’s nasty weather because we play in it all we all I mean, I get it, but when it’s a beautiful spring day out here on the turf. All our home games or one are over here. But come out and support them and let them know that you’re here and just support them.”

The Mt. Zion girls soccer team will begin its season against Mattoon on Monday, March 14 at 6 p.m in the St. Theresa Tournament.