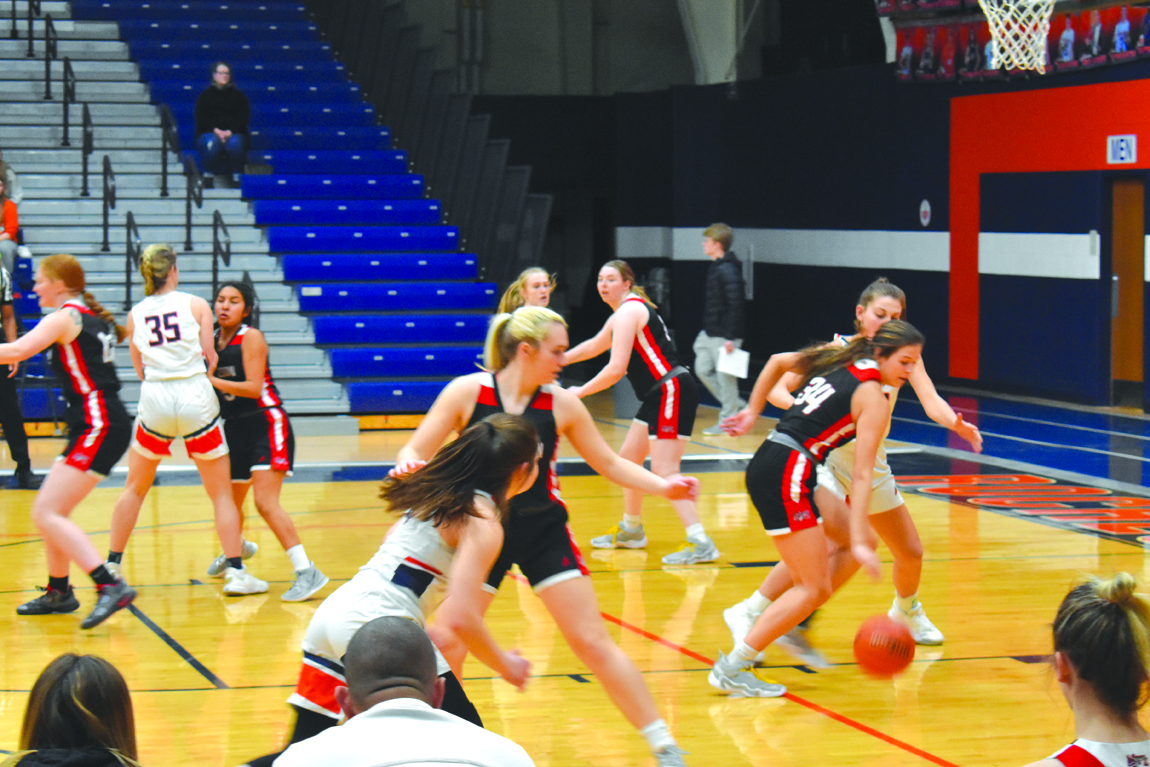 Kalliana Becker defends the passing lane and Denver Anderson makes a steal in a 56-43 regional semifinal loss to Rochester at Rochester.

The Mt. Zion girls basketball team ended their season last week in a regional semifinal game against Rochester at Rochester. Denver Anderson scored a team high 26 points, but the Braves fell to the Rockets 56-43.

The Braves started the game defensively pressuring the Rockets when Denver Anderson came up with a steal. Abby Scharf then found Anderson for an open three-pointer that she nailed to put the Braves up 3-0.

The Braves’ defense forced the Rockets’ offense to miss shots in the opening minutes. The Braves capitalized behind a pair of Anderson made free-throws and a Shcharf two-point basket.

The Rockets’ opened their scoring when Jenna Dorman found Emma Dixon for a layup to make the score 7-2. The Rockets finished the quarter on a 8-4 run to narrow the Braves’ lead to 11-8.

The Braves opened the second quarter with Scharf nailing a three-pointer off a Kalliana Becker assist. A possession later Scharf found Anderson for a two-point basket to make the score 16-10 for the Braves.

The first half ended in a 20-19 lead for the Rockets. The Rockets extended that lead in the third quarter when Dorman nailed a threes-pointer and Kaylen Reed made a layup to extend their lead to 25-19.

Anderson scored four unanswered points for the Braves to narrow the Rockets lead to 25-23.

Late in the third quarter Reed put the Rockets up 31-24 after making a layup. The Braves responded behind an Anderson two-point basket and a Maddie Kendall three-pointer off a Scharf assist to narrow the Rockets’ lead to 31-29.

The Braves opened the fourth quarter behind Anderson making two free-throws to put the Braves up 36-35. The Rockets then went on to outscore the Braves 21-7 for their regional semifinal win.

Rochester is playing incredible ball right now and I told the girls I don’t care what the scoreboard said this was not a loss,” Head coach Steve Marvel said. “We have a lot to look forward to next year and we can hold our heads high after the way we competed. I’m just proud of them.”

The Braves finished their season with a 10-22 record overall and a 2-10 Apollo Conference record.

The Braves will graduate three seniors in Scharf, Macie Fleming and Hannah Sago. The Braves will have a huge chunk of their lineup returning in Anderson, Bracie Barnes, Miya Means, Kendall and Ella Sommers.