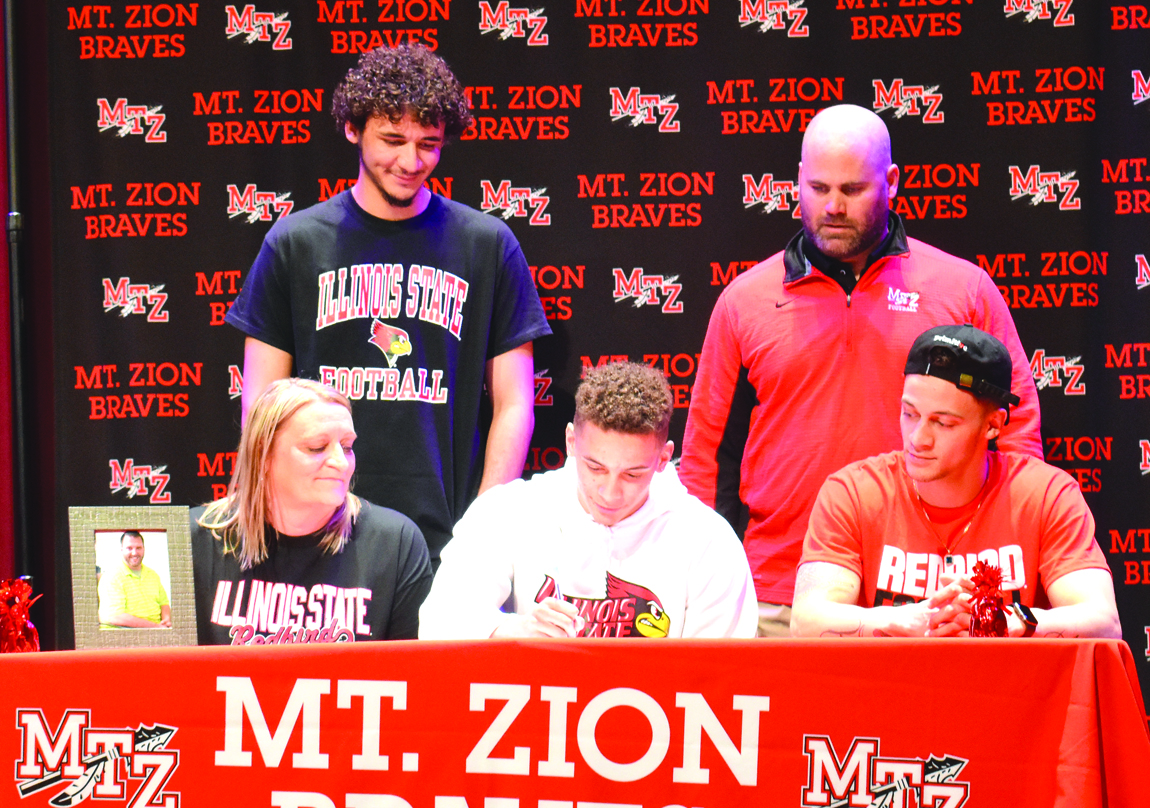 Christian Keyhea (center) signs his letter-of-intent to play football at Illinois State University next fall surrounded by his family and Coach Etherton.

Mt. Zion senior wide-receiver/defensive back Christian Keyhea signed his letter-of-intent to play for Illinois State University in Bloomington next fall. Keyhea had different offers, but stated that the importance to him was his mom being able to make it to every home game.

“So it’s (Illinois State) closer to home,” Keyhea said. “And when I took my visit, I felt really comfortable there. And the coaches and players made me feel like I was already a part of their team. So that was the main reason why. And then another reason I wanted my mom to be able to make all my games, all my home games, since it’d be harder to make the ones if I was at South Dakota State.”

Mt. Zion head coach Patrick Etherton mentioned that as a freshman that he and his fellow coaches knew that Keyhea was a special player. Coach Etherton said that Keyhea has worked hard on becoming a great receiver and catching the ball.

“He was one of the kids that we had that anytime he could touch the football he could score,” Coach Etherton said. “He’s just so much faster than everyone else and a lot of that was hard work, knowing his routes and what we expected out of him as a wide-receiver and defensive back. Our kids are going to see that even if you’re the fastest kid you still have to work on things to get better and he (Keyhea) did that. He didn’t just didn’t rely on speed, but also his flexibility.”

At ISU, it is undecided where Keyhea will play position wise. Keyhea said when asked he hopes to start at wide-receiver and if he doesn’t like it switch to defensive back. The two things Keyhea hopes to take with him to the college level and implement are his speed and the coaching lessons from his coaches at Mt. Zion.

Keyhea’s major is undecided, but has the intent of possibly pursuing a degree in Business Management or Construction Management. His goals for his freshman year are to get a 3.5 GPA and make an impact on his team as a freshman.

Keyhea’s humility showed when asked what he will miss and cherish after his time with the football program.

“Coach E (Etherton) for sure I’ll miss that and all of my other coaches,” Keyhea said. Everyone I’ve played with here I’ll miss. It’s been fun and I couldn’t be in this position without them. I’ll miss it all really.“

When asked what last words of advice Coach Etherton would give to Keyhea those words were it’s going to be hard and tough, but to enjoy it and have fun.

“Division one level is different from the other levels because of the time commitment, but to enjoy it and have fun and do what they’ve asked,” Coach Etherton said.” Position wise I don’t think they really know for sure where they’re going to put him so just embrace it, embrace wherever he ends up and make the most of it. The big thing is to have fun and enjoy those four years. Four years of your entire life’s not very long and that goes fast and kids look back and it’ll be just a blur in their memory but he’ll do well.”