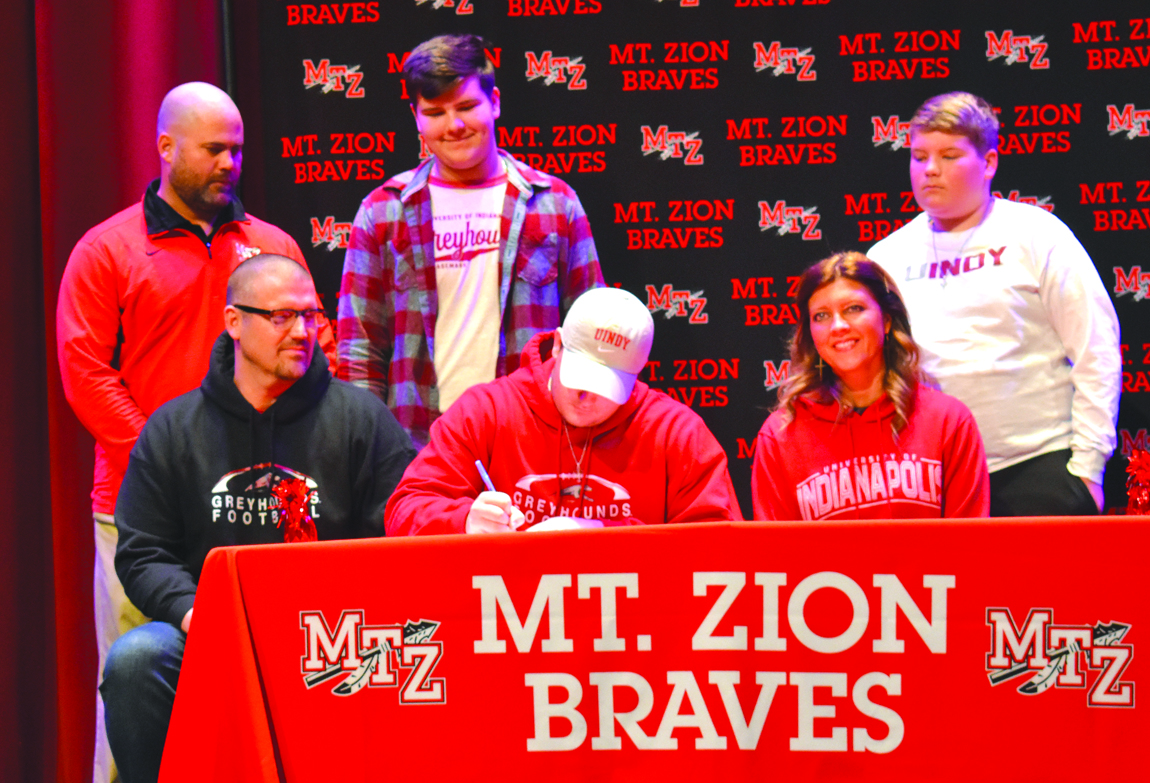 Ryne Buttz (center) signs his letter-of-intent to play football at the University of Indianapolis next fall surrounded by his family and Coach Etherton.

Mt. Zion Braves senior offensive and defensive lineman Ryne Buttz signed his letter-of-intent to play for the University of Indianapolis next fall.

Buttz chose the University of Indianapolis due to his visits falling in love with the campus, he fell in love with the coaches there and found what he wanted to do with his future in Exercise Science which will be his major.

Buttz played four years for the Braves. In his senior year, he made all-Apollo conference first team and IHSFCA 4A All-State Honorable Mention. Buttz also has a busy schedule besides football as he is part of different sports and activities such as Mt. Zion Swingsations.

When asked about what was seen from Buttz in the last four years in the football program head coach Patrick Etherton said that he’s seen tremendous growth.

“As a student athlete, he’s gotten much bigger and stronger, and really put in a bunch of work to do that and he has had a challenging schedule,” Coach Etherton said. “He’s been involved with a lot of things in the school, including multiple sports and also Swingsations. So it’s been amazing watching him develop in those four years, and he became one of the better linemen in our area this past year, and one of the better ones will have coached in our six years here.”

Buttz was also voted a captain his senior year due to his “workhorse” work ethic. Coach Etherton said that his ethic has set an example for his younger players.

“He’s just an absolute workhorse just shows up every day the same enthusiasm attitude and really set the example that way and then played football like you’re supposed to and got after it every play. In most times he was a dominant offensive and defensive lineman, but he came every day the same way to practice and the weight room and this is why he’s going to be ultra successful at the next level.

Buttz hopes to play his first year and said this summer will be full of work and readying himself for his first season or if he’ll redshirt. His goals for his first year are to maintain a 3.5 GPA and possibly get playing time as a freshman. The coaches at the University of Indianapolis said

Buttz could potentially play at all five positions on the offensive line: guard, center or tackle.

The last words of advice Coach Etherton will have for Buttz is to enjoy his four years as they go by quickly and it will be tough, but to embrace it and enjoy.

What Buttz is going to miss the most about his time at Mt. Zion is the importance of Friday Night Lights in Mt. Zion

“There’s nothing like playing under the lights in front of your whole own on every Friday night,” Buttz said. And getting to be out there with all your buds, that you’ve grown up with playing football with so that’s one of the things I’ll definitely cherish.”