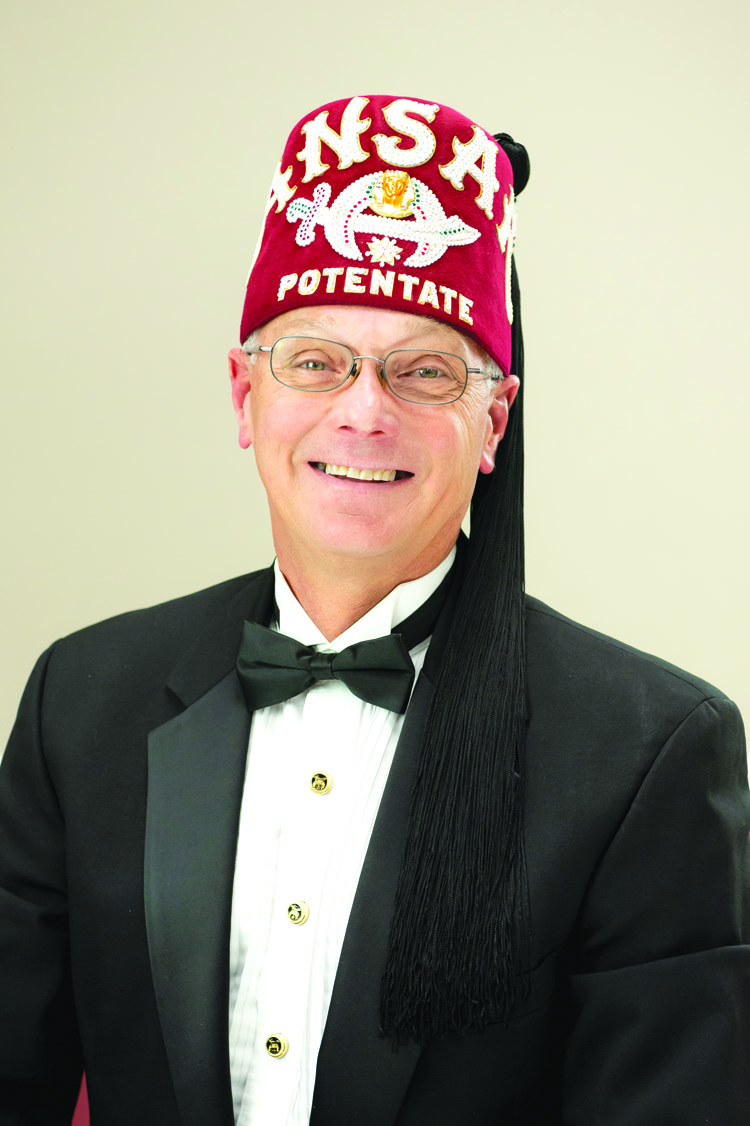 Stan Harris was installed as Potentate of Ansar Shrine in ceremonies on January 15.

Stan Harris of Atwood was installed as Potentate of the Ansar Shrine Club in ceremonies on Saturday, January 15, at the Ansar Shrine Center, Springfield. He will serve in this capacity for one year. His dad, Roger was appointed Honorary Outer Guard that same evening.

Stan’s message and words to live by “Coming together is a beginning, keeping together is progress, working together is a success” by Henry Ford begins his message to other members in the club yearbook. Stan states in this message, “You cannot begin to feel how honored I am to work with all of you nobles this coming year as your 108th Potentate of Ansar. I truly believe we can be more productive working together to serve our patients, their families, our fellow nobles and their families as well as our hospital, doctors, and nurses.” He added, “2022 is a momentous one for both of our organizations, Shriner’s International will celebrate its 150th Anniversary, Shriners Hospital for Children will mark its 100th anniversary, and Ansar Shrine Circus will be celebrating its 75th year.”

Stan feels this is a great & exciting time to be a Shriner and especially an Ansar Shrine. “We need to be proud of Ansar. We are in a unique situation by having Ansar members on the boards of the Chicago and St. Louis hospitals. Our clubs and units are very active parading and fundraising.” For those who aren’t aware of the meaning of Ansar, it is Arabic and means, “Those Who Give Aid.” Ansar’s Nobles try to do just that through their support of the 19 Shriners Hospital for Children and 3 Burn Institutes. The primary hospital is in St. Louis.

At the age of 21, Stan joined the Atwood Masonic Lodge in 1985. His grandfather, the late Ora Harris, and his father, Roger Harris, were members. Stan’s brother, Scott, also joined at the same time. He said it has always been a part of their life. Also, a family member in Shrine is Rick Fiala, Stan’s brother-in-law. He is married to Stan’s sister, Sandy, also a part of the family business.

Stan became president of the Tri-County Shrine Club in 2003. He has been working toward his new position for several years. He served as an ambassador/liaison between the club and temple with Ansar in Springfield and other positions to get there. Then he still had to be elected.

There are five temples in Illinois, two Shrine Clubs and 27 parade units.

The sole purpose of Shrine Clubs is to raise money for the 24 Shrine Health Care Systems, better known as Shriner’s Children’s Hospitals. Volunteers are always needed to assist with the circus and other events.

In 2021, Stan says over 50 families/patients were transported to one of the Shrine Hospitals locally. Stan, Roger and other volunteers take the families. Stan says it is so fulfilling going to the hospital, normally they go to St. Louis, visiting with the staff and patients. He showed me a picture of himself with one of the young men we see on the commercials.

It is difficult to explain the expression on Stan’s face and sound in his voice when you talk with him about Ansar Shrine and Shrine Hospital. There is definitely a smile and so much enthusiasm he has to help these kids and even young adults in getting better. He forms a bond with them that just comes naturally. If you want this experience, talk to Stan, he will explain what it means in his slogan for the year, “Changing Our Kids Future.” With his enthusiasm, without a doubt, he will get it done.

Stan’s wife, Jann, is referred to as Lady Jann in the Ansar Shrine Club. Stan states, “Lady Jann’s program is to promote off premise clinics and to spread the word of their hospitals and their care, providing materials and support to clubs and units so they can promote this to other organizations and their communities. Our goal is to grow connections in our club and units, so they can grow connections in their communities, which will increase awareness of our care and keep our hospitals in good standing.”

Stan and Jann have two grown daughters, Elyse and Emma. After graduating from the University of Illinois, Stan returned to Atwood and is an important part of the family business, Harris Companies, Inc. Jann is the Title One Coordinator for the ALAH School District Unit #305.

She has been teaching for over 30 years. Elyse resides in Des Moines IA and is employed by ADM. Emma is a junior at the University of Illinois in Champaign.

This will be an exciting year for Stan and his family, as well as the Atwood community. Stan and the Ansar Shrine will be featured in many areas of the Apple Dumpling Festival in August. The community needs to make it their goal to help the Shriner’s Hospital and support Stan in this endeavor.