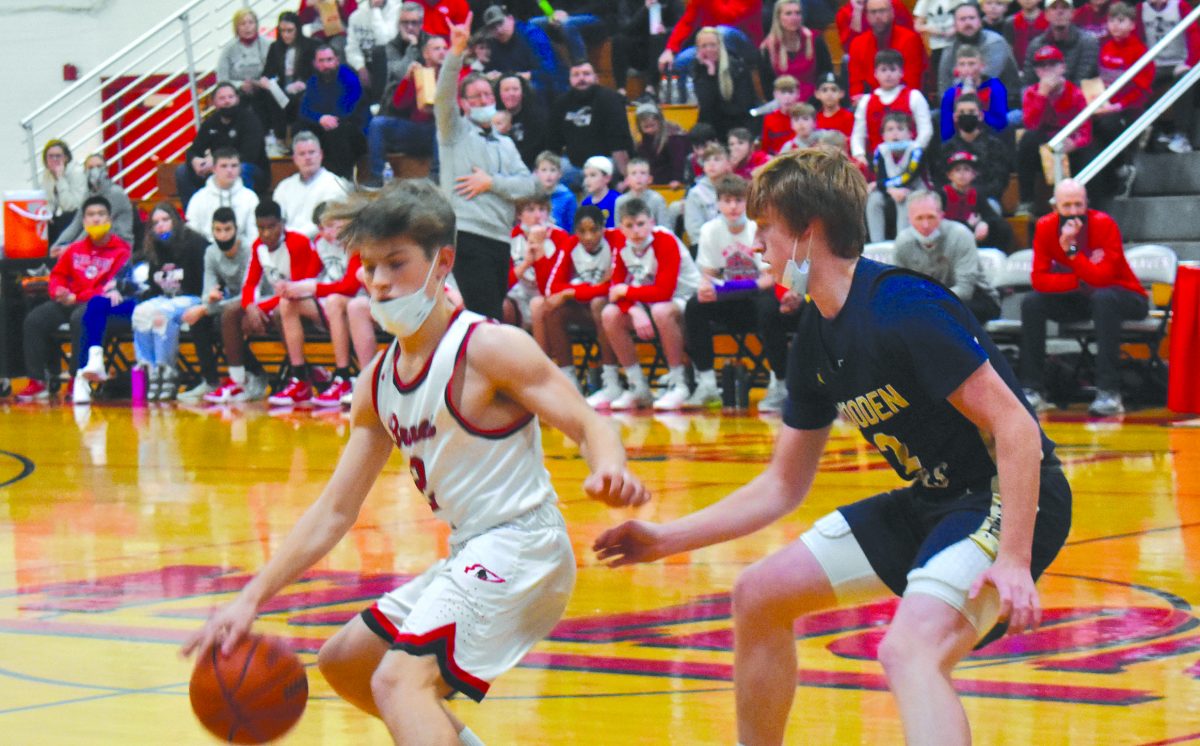 Sam Driscoll tries to shake a defender off the dribble in a 50-46 win against Teutopolis at home.

Against Teutopolis, the Braves began the game on a 7-0 run and finished the first half with a 21-18 lead. Teutopolis went on a 10-4 run that included baskets from James Niebrugge, Caleb Siemer and Max Niebrugge to make the score 28-25.

Teutopolis responded with a Mac Niebrugge two-point basket and then Simer found Kayden Althoff for a three-pointer to give the Wooden Shoes a 36-32 lead. The Braves scored once more before the end of the third quarter when Ethan Hamrick found Jack Driscoll for a lull to make the score 36-34.

The Braves opened the fourth quarter regaining the lead in their second possession. Clark found Cuddy for a three-pointer that gave the Braves a 37-36 lead. Next possession Clark rebounded on the defensive end to set up Hamrick for a lap to make the score 39-36. The Braves defense forced the Wooden Shoes’ offense to miss shots that the Braves’ rebounded. Brayden Trimble grabbed a rebound and found Lyncoln Koester for a two-point basket that gave the Braves a 41-36 lead.

The Wooden Shoes got into two-points twice in the last minutes of the game. Trimble and Sam Driscoll created back to back steals on the defensive side of the ball that led to the Braves stopping the Wooden Shoes’ offense. Trimble then went to the line and made both free-throws to give the Braves a 50-46 win.

“I thought defensively we were very good again,” Head coach Dale Schuring said. “Carson did a great job on their big kid, I thought Kam (Clark) and Brayden (Trimble) did a great job on their shooter. Some of the other kids took advantage of us a little bit. But that was kind of what we wanted to do going in is don’t let 54 and two beat us and some of the other kids stepped up and kept them in the game. So like Tolono on Saturday, our defensive effort, much, much better and really something to look forward to. Offensively we’re kind of stagnant and not doing a whole lot, but managing. So kind of like I talked about Saturday,we’re grinding through stuff, which at this point of the season it’s all a grind.”

The Braves play Taylorville this week. The focus of improvement will be offensively moving the ball, player movement and not being stagnant on offense.