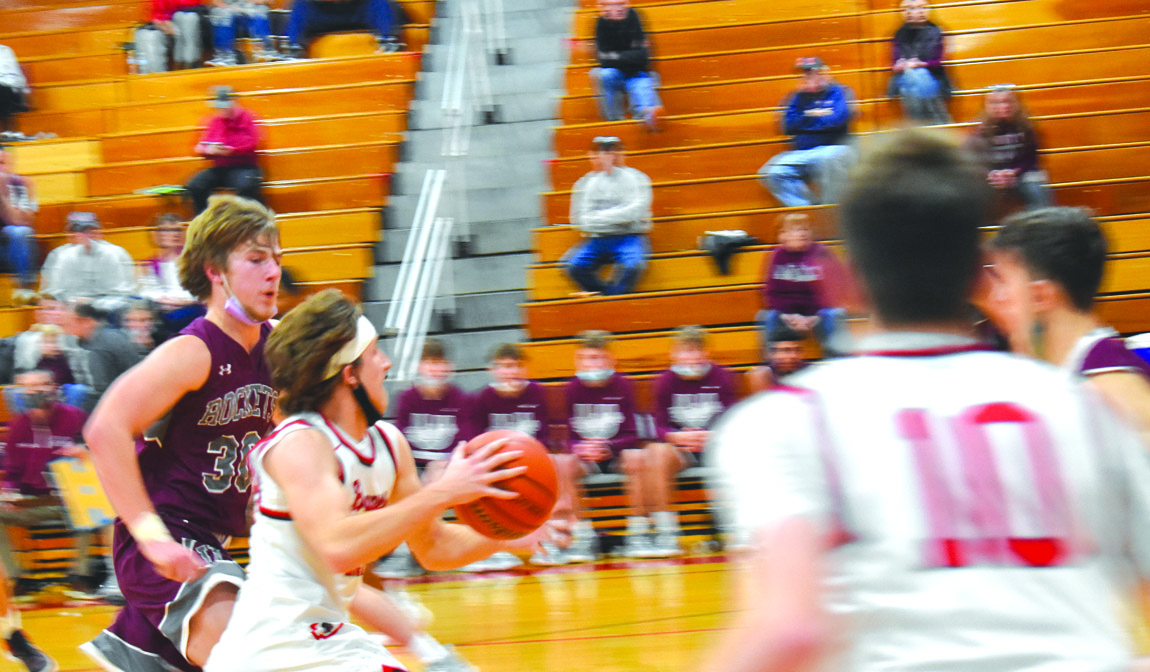 Ethan Hamrick drives past the defender to the basket in a 62-56 win against Tolono Unity at home on Saturday night.

The Mt. Zion boys basketball team went 2-1 last week in its games. The Braves picked up wins against Rantoul and Tolono Unity, but lost to Lincoln.

In the Tolono Unity game. The Braves were down 5-4 when Trustan Price found Henry Thomas for a layup.

The Braves took the lead when Carson Cuddy grabbed the offensive rebound and made the putback layup while being fouled. Cuddy made his free-throw to give the Braves a 7-5 lead.

The Braves turned that basket into a 10-0 run. Lyncoln Koester stole the ball a few defensive possessions later and made the driving layup and then found Kam Clark for a layup to make the score 11-7. Koester then found Cuddy for a three-pointer that made the score 14-7.

The Rockets ended the run when Blake Kimball made a spin-shot layup to make the score 14-9. Three-pointers from Cuddy and Koester gave the Braves a 20-12 first quarter lead.

The Braves finished the half up 34-24 and kept a 10 point lead till mid-way through the third quarter. The Rockets went on an 8-0 run that saw four points from Kilball driving layups, a Will Cowan layup and a Thomas layup that made the score 40-38.

“We just got to grind through situations like that,” Head coach Dale Schuring said. “ We’re gonna see more and more games like that. Most of our games have been, for the most part, not close one way or the other. And to fight through that and have a lead and coming back and made some plays, whether offensively or defensively. That’s just grinding it out and that’s something that early in the year, we weren’t ready for that. And now we’re maturing, we’re getting smarter and we’re getting better. So it’s just part of the process of a long season.”

The Braves stayed cool under pressure and ended the Rockets’ fun with an Ethan Hamrick layup. The Braves then forced the Rockets to miss shots and Koester picked up another steal. Offensively, the Braves finished the third quarter ahead 44-38 when Jack Driscoll found Brayden Trimble open and Trimble drove to the basket and made his layup.

The Rockets cut the lead to 44-40 when Thomas made a layup. The sheave responded with two straight three-pointers from Cuddy that were set up by Hamrick. Cuddy then nailed a floated to make the score 52-44. Hamrick followed with seven points of his own, nailing a three-pointer and two driving layup to push the lead to 59-47.

The Braves finished out with a 62-56 win. Cuddy led the Braves in scoring with 23 points and Hamrick scored 21 points.

The Braves improved to 16-5 overall and 3-4 in Apollo conference play. This week the Braves will play Teutopolis, Mahomet-Seymour and Jacksonville. The main focus for the team in the next week will be focusing on details according to Coach Schuring.

“We have to start focusing more on details,” Coach Schuring said. “We run some stuff and some stuff we know, but there may be something that we haven’t had a chance to run in a game, or maybe haven’t practiced for a week or maybe longer and I will pill it out and we got to know that and execute it because at this point in the season. Everybody’s scouting and they got all kinds of stuff on there. You got to pull some stuff out that you maybe haven’t used in a while that maybe they don’t have from the formation. And we got to focus on details and remember all those things and getting down and executing.”