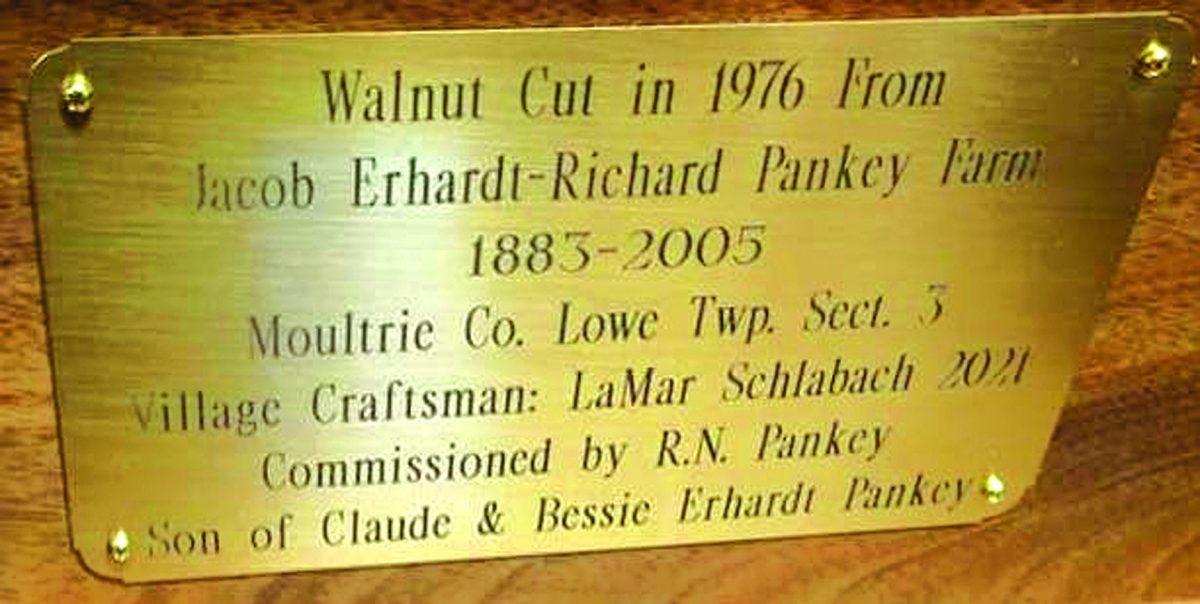 The plaque was placed to commemorate the family and the origins for the desk.

By Marty Yeakel
When I saw this on facebook I knew it needed to be shared. Thankfully Dick and Lamar were kind enough to tell me it was OK. I was going to include it in the column but also knew it needed its own space in the paper with pictures! So here is the story, in Lamar’s words, with some extra thoughts from Dick’s daughter, Elizabeth Pankey Varner.
Lamar: “Dick Pankey has been a close friend and neighbor for as long as I can remember. When we were growing up he lived on a nice farm a mile north of our home at the time as the crow flies. Our Dad used to work for him, helping out on the farm and clearing hedge rows from time to time. When Dick was growing up, he remembers sitting under a walnut tree behind his house, cracking walnuts until his little hands were blackened with juices.
In 1976 the walnut tree came down. A few years later my friend Danny Ray Yoder cut planks from the tree in his sawmill and for many years the walnut planks dried in an outbuilding on the Pankey farm.
In the early years of the 21st Century a tornado ripped through his outbuilding and Dick lost something like a third of his treasured tree. Plenty of walnut boards remained, thankfully. and a few years ago I began crafting furniture from the remnants. My latest project is the walnut desk depicted below (see picture). I’ve also crafted cutting boards for the Pankey Family as Christmas gifts (pictured).
I work mostly alone but this 36” × 66” executive desk required a little help from my friends, quite a lot actually. Les Diener and Glen Roberts helped me finish the top-thank you! Mormon Missionary friends came to my rescue in ways large and small, helping to set up the desk in my showroom, and with delivery just before Christmas. Elder Tucker Phillips and Elder Parker Farnsworth are tall and slender, unlike myself (ha), and so were able to get in under the desk to assemble and disassemble as required. Elder Tate Bartholomew helped out as well. Thank you so much!
Thanks also to Elizabeth Pankey Varner and family for planning and advice.
And thank you Dick Pankey, waiting patiently as your Walnut Giving Tree became a desk at long last.
God bless, everyone!
P. S. A special thanks to Uncle Omer Miller and David Cornwell for your kind help and support.”
Liz: “Lamar, the desk project is not just a fine piece of craftsmanship, but a story filled with so much love. This had so much meaning for my father. Lamar had him involved every step of the way; in the shop, driving to see pieces needed, lunch and many shared stories. I believe this is amazing because two hearts, Lamar and Dad, were involved and of course the hard work and skill of a fine craftsman. Thank you for these beautiful pictures and story.”