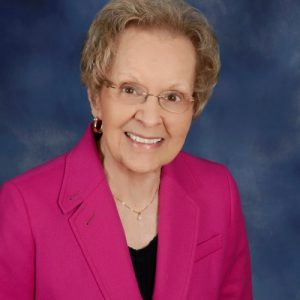 Funeral services will be held at 11:00 A.M. on Tuesday, December 28, 2021, at the Vine Street Christian Church, 249 South Vine, Arthur, IL. Pastor Bob Silvanik will officiate. Burial will be in the Arthur Cemetery. Visitation will be held from 4:00 P.M. to 7:00 P.M. on Monday, December 27, 2021, at the Church. The Edwards Funeral Home is assisting with arrangements.

June Carrell Regenold was born on February 14, 1923, in Douglas County, Arthur, IL. She was a daughter of William F. and Dorothy (Carrell) Regenold.

June was a member of the Vine Street Christian Church.

June was a 1941 graduate of Arthur High School. She attended the University of Illinois in Champaign, IL where she was a member of the Gamma Phi Beta social sorority.

June became a licensed Funeral Director in 1953; she owned and operated Fleming Funeral Home in Arthur, IL from 1963 to 1972.

June was an avid Fighting Illini Fan. She was a social member of the Kaskaskia Country Club. She enjoyed playing cards of all kinds, but Bridge was certainly her favorite. June had a kind and loving spirit and always enjoyed spending time with family and friends.

She is survived by two daughters, Patrice Fleming of Cypress, TX and Pamela Korte (Larry) of Covington, IN; one grandson, Robert Korte (Angie Prescott) of Bloomington, IL and two great-granddaughters, Alyssa Korte and Addison Korte.

A second grandson, Eric Korte, preceded her in death.

Memorials may be made to the American Heart Association.