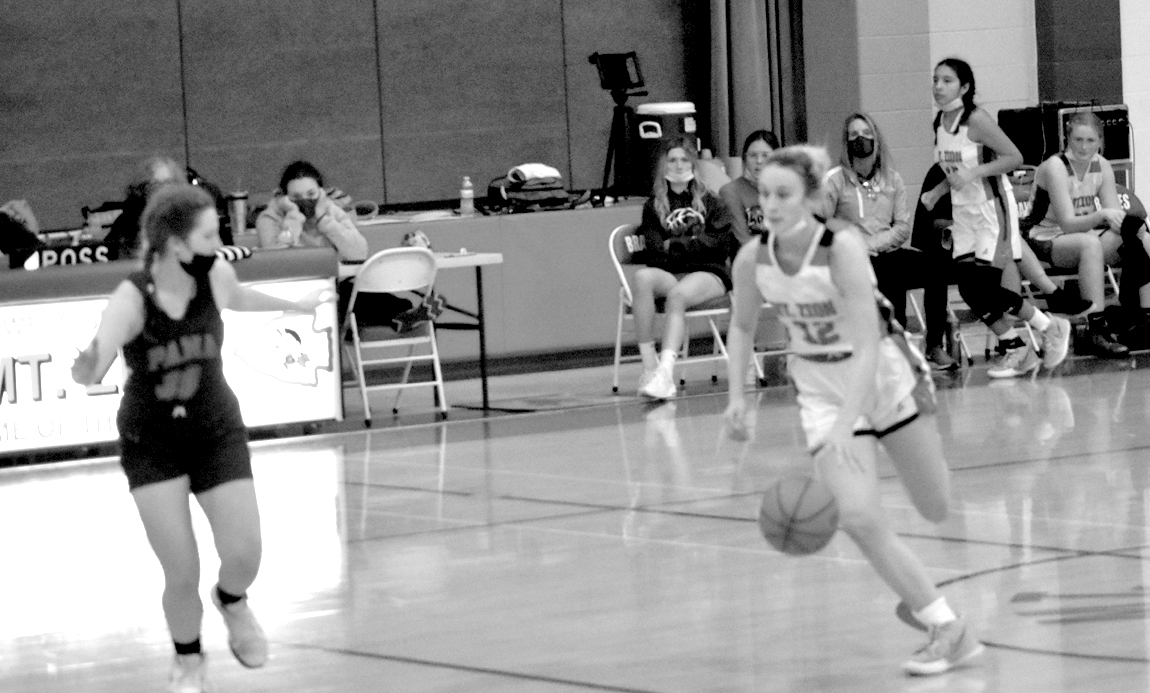 Macie Fleming attempts to dribble past a defender in a 45-29 loss against Pana at home.

The Mt. Zion girls basketball team went 1-2 last week with its lone win coming against Charleston in a 44-33 Apollo Conference win. Their losses came against Mahomet-Seymour and Pana.

In the Pana game, the Braves trailed 21-10 early in the third quarter after Jillian Hamilton nailed a three-pointer. Hamilton earlier in the game scored her 1,000th career point.

The Braves began to rally when Kalliana Becker pulled down an offensive rebound and made her putback layup. The Braves found themselves down 10 again, but started a run when Abby Scharf nailed a step-back three-pointer. On the next possession, Scharf found a cutting Macie Fleming for a layup to narrow the lead to 25-17.

The Braves’ defense clicked throughout the third quarter and that was a big reason in their run. The Braves were able to create turnovers and communicated to each other.

“I am so proud of our girls,” Head Coach Steve Marvel said. “Because after we had a very poor short showing last night against a team like Pana that is loaded and got excellent players that are well-coached and they play hard, they’re physically aggressive. And we could have laid down after last night. And we did and we came out and we battled.And I’m so happy with our improvement with what we did in this game. I don’t care what the final score says, it was closer to 16 points, in my opinion.”

Coach Marvel believes this was a win for his team, because they battled and competed as well as got better after the Pana game. Coach Marvel wants the positives he saw on both sides of the ball to carry over into this week.

“I just want our defense to be again, where it’s where we were today with the communication of switching that stuff that’s very important to our principles, and what we want to do,” Coach Marvel said. “And we really improved that so much today. I want to carry over that defensive intensity. I want to carry over when we’re patient when we cut, and make sure they recognize how much better we are.”

The Mt. The Zion girls basketball team will face Clinton and Monticello this week.