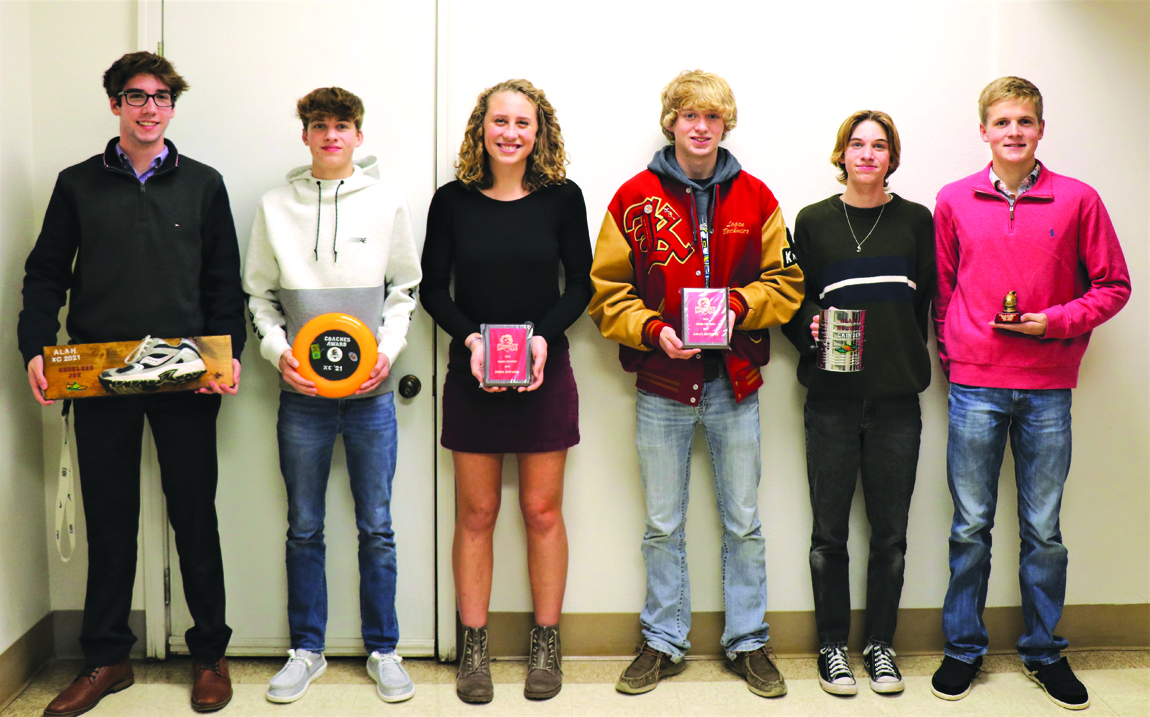 The incredible season of Knight’s Cross Country culminated with the Fall Sports Recognition Program on November 12.

During the all sports portion of the event, Coach Lyle Dorjahn provided a brief overview of both the boys and girls seasons highlighting the fact that the schedule provided elite, state ranked competition every weekend.

Coach Dorjahn detailed what qualities the new “Knight” award recipient needed to have to receive the honor. He then presented the first ever Knight Cross Country award to Jace Green. Also noteworthy is the fact that Jace also ran a personal best at the state meet finishing just 3 places outside of All State Honors. All- Conference certificates were presented to Logan Beckmier, Jace Green, Jacob Adcock, and Lyle Adcock.

After breaking into team camps, Dorjahn passed out booklets that recapped the entire season detailing results from every meet as well as newspaper articles from the Arthur Graphic, Champaign News Gazette, and Decatur Herald and Review. He then discussed the highlights of the girls team, emphasizing their tremendous improvement at end of season. All ladies received varsity letters for their efforts. After highlighting Emma Edwards 1st ever Sectional qualifying effort, she was presented with the girls MVP Award.

In honoring the IHSA State Runner-up boys squad many accolades were offered as this group all improved drastically at season end with the top 6 runners offering personal bests at the state championship. Dorjahn presented varsity letters to all members of the boys squad and team awards as follows:

MVP – Logan Beckmier. Led team in every meet. All-State award winner. Ran one of the school’s top times in history and continued a streak of All-Staters representing ALAH.

Shoeless Joe Award – Jacob Duzan. Jacob overcame injury and some self doubts, showing the determination needed to succeed on the big stage at the state meet running a massive personal best to help team to 2nd place.

Grinder Award – Jacob Adcock. Jacob came to practice every day, did the workouts and improved his times drastically to work himself into the top 2-3 position at end of season. He went under 16 minutes for 1st time at State.

Coaches Award – Lyle Adcock. Lyle overcame an early season injury received in PE class to compete as the teams very consistent #4 runner. His perseverance and determination allowed him to drop under 16 minutes for the 1st time at the State meet.

To conclude the team portion of the event, team Captain Jace Green presented a present to Coach Dorjahn in appreciation for his efforts throughout the season.