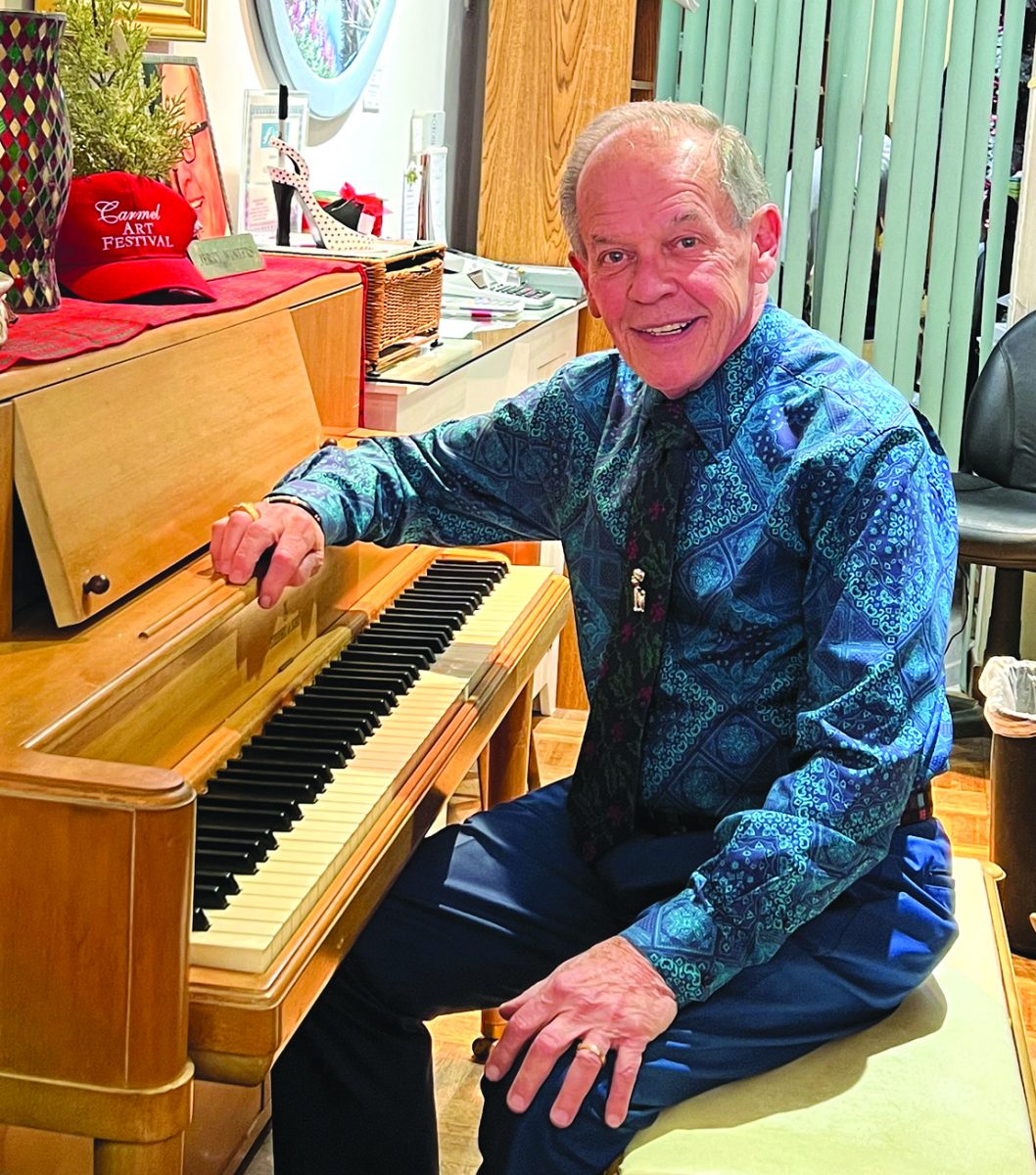 There are very few stores where you walk in a stranger, and come out with a friend. This is the feeling you have when you visit Winters Gallery & Gifts, 134 S. Vine St., Arthur. Jerry Winters is the owner of the store and he is an extremely talented man.

This is a unique shop with breath-taking original paintings from professional artists, including Jerry Winters, new and vintage jewelry, French hand-milled soaps with 30% shea butter, Stieff stuffed bears & animals, Jerry Winters designer socks, candles, beautiful Mary Francis bags, furs, books, hats, caftans, room air fresheners, Christmas ornaments and more. There are just too many items to name them all, you have to see it for yourself.

Jerry is helpful in answering any questions, or you may be greeted by talented artist Sarah Lawrence.

Jerry and his late wife Joan, opened the gallery in 2015. They lived in Decatur at the time. You might wonder why Arthur to open an upscale art gallery/boutique? Let me bring you up to date. Jerry came from a family of talent and it is definitely a part of who he is. Anyone who served in the U.S. Armed Forces may think Jerry looks familiar. Before he met Joan and they started in the art business, Jerry was an entertainer and I might add, he still is. “Back in the day,” Jerry sang and played the songs most requested by his fans at the famous Mark Thomas Outrigger Restaurant and Show Lounge in Monterey, CA historic Cannery Row. He traveled on several USO Show tours with Bob Hope. Jerry did his own show and went to Fire Base Camps. Jerry says his smaller show was concerned with getting into the fire base camps in the jungle interiors with just a small door less chopper, pilot, electric piano generator, drummer, bass, mikes/speakers, 4 gunners plus Brooke Shields or Ann Margaret and a lot of prayers. It was important to him to entertain all the troops. Sometimes they had 4-6 shows a day. He was on a YRBM transport ship and ended up quietly going down the Delta at night on a giant raft to get to some of these troops. It was scary, but he didn’t want to leave anyone out. He said he wouldn’t trade those years for anything.

His piano is in the gallery and if you are interested, he may just break out in song occasionally to entertain customers and curiosity seekers. I can tell you; you won’t be disappointed.

Jerry and Joan met in 1972 when she was a very successful senior marketing director for Mary Kay Cosmetics. Joan traveled to San Francisco to attend a Mary Kay convention. Jerry was performing in the city, and she eventually booked him to entertain at the convention.

Jerry was born into a music/theatre world. His dad was a seasoned musician. Jerry began his career on radio at the age of eight and made his first professional supper club appearance at 15. He sings in several languages, and is from a family of Hungarian musicians. He has been a professional clown, stand-up comedian, sang opera. He was monitored by Joel Gray and Sophie Tucker called him “Young Mr. Show Business.” He attended school with another singer, Wayne Newton. It is said the two constantly competed with each other. He has a great personality and is very witty.

Jerry and Joan married in 1975. Shortly afterward, she quit Mary Kay to be Jerry’s business manager. Jerry was a talented artist, as well as Joan, but usually gave his paintings away to family members or to organizations having a fund raiser to help them raise money. Joan asked

Jerry if he trusted her to take over management of his career. He trusted her great ability and agreed to put it in her hands. The first thing she told him that he was not giving any artwork away. He was astounded with the amount of money received from some of his paintings.

Jerry and Joan lived in Carmel, CA and Joan owned several businesses in Carmel, including a boutique, dress shop and bridal shop. She expanded her holdings when two nearby shops and a former bakery went bankrupt and became available for purchase. She purchased one of the failed businesses for her brother who lived in Illinois. He moved to California and ran an art shop. Helping her brother is how Joan and Jerry got into the art business. This experience also helped shape her business philosophy. She wanted to help people; find out what they needed to succeed and help them get it. They also lived on a farm in France, and ran a gallery in the area. They have done a lot of traveling between homes and businesses.

Jerry attributes his success to Joan’s knowledge of art and how to succeed in business. Joan wanted to sell their businesses and come back to the Midwest. She was raised in Southern Illinois and graduated from Okawville High School. They have family not far away and liked Arthur.

They sold their home in Decatur about four years ago and moved to Arthur. Joan typically ran the gallery; Jerry was the lift man. When she needed any shelving moved, he was the guy to do it. She was the mastermind of what to buy, how to arrange, etc. He said he caught on to some of it because he was in and out, but wasn’t like Joan.

Joan’s health started to decline and she wanted him to learn the intricacies of the business. Jerry now realizes that although he has been retired 8 years, she was training him to run a successful business after she was gone. Joan passed away on Thanksgiving morning of 2020. Jerry still has a difficult time talking about Joan. They were perfect together and he says she made him a better man. “Joan was my best friend,” says Jerry.

While it has been rough going the past few years, especially this past year, Jerry has decided he must carry on what he and Joan started, and make it successful. If you want a unique gift and don’t want to travel to Chicago, St. Louis or Indianapolis, this is your place to shop. Jerry is a delightful person to visit with and as I said you may even be serenaded.

Jerry is close to his grandson Mark. Jerry stated, “He is very good at reading me.” Jerry had hip surgery two months ago, but he is back and doing well. Mark took good care of him while he was recuperating.

The Village of Arthur should be very proud to have Jerry Winters carry on what his late wife began. I know Jerry is comfortable running the store because there lives the spirit of Joan; the beautiful paintings she has done, and the luxury store she created in a small town. When you visit the store, look closely at Jerry’s paintings, be sure to find their 5 teacup poodles hidden in each of Jerry’s paintings. Look for Claude Bouchee’ Monet (Little Bite), Minuette, Manet, Monique and Monette.

I want to add an important note to the story…since this article is published on Wednesday, Dec. 1, please stop by Winters Gallery and wish Jerry a Happy Birthday. Everyone loves a birthday wish!