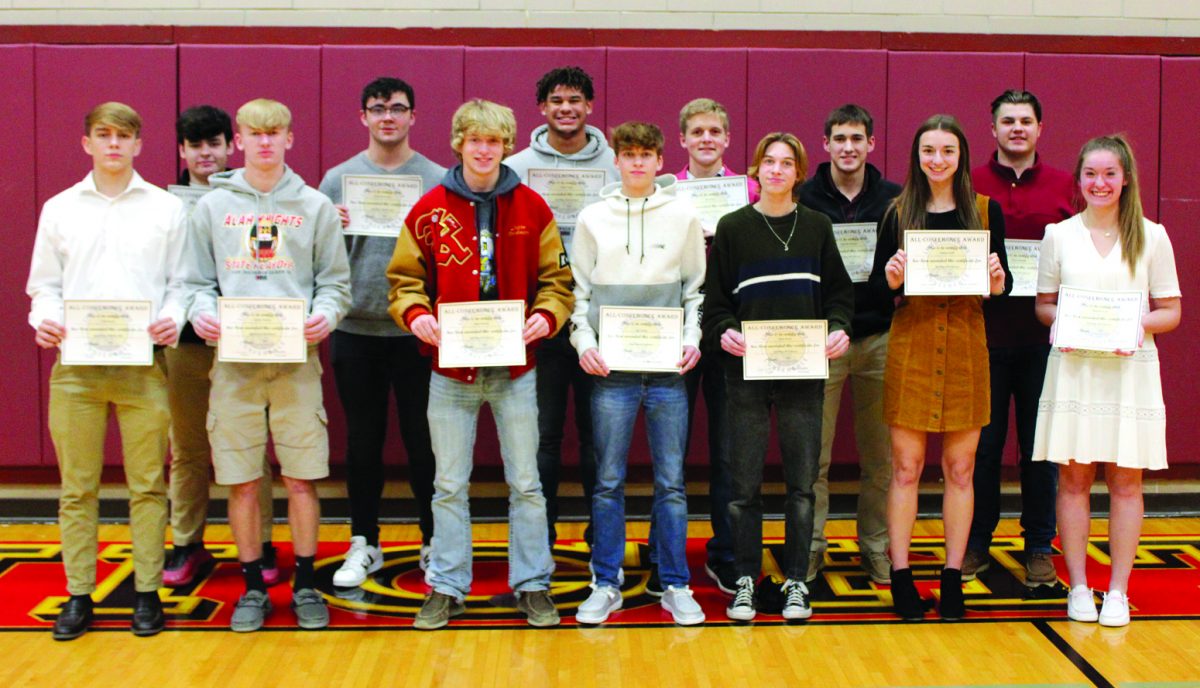 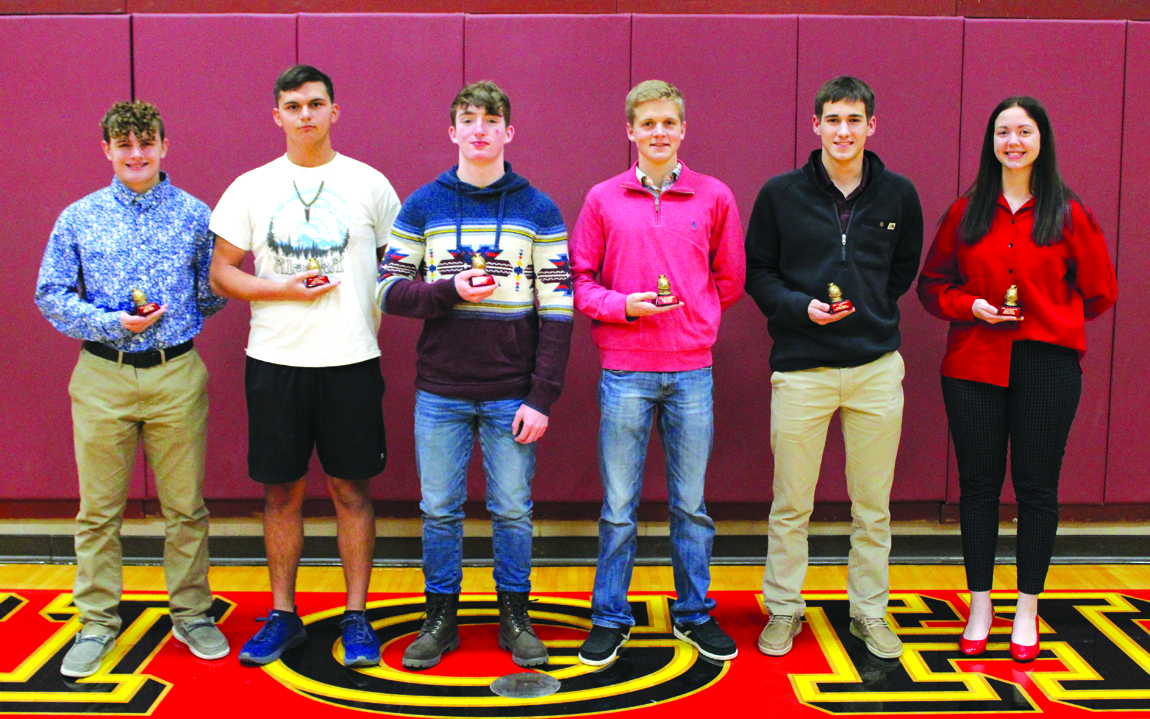 These athletes were selected by their respective coaches for the Knight Award. The criteria for this award varies for each sport and coach. The information for each is in the article about the Athletic Awards Night. From left to right: Maddix Stirrett, Football; Chance Lindstrom, Soccer; Max Allen, Football; Jace Green, Cross Country; Kade Herschberger, Golf and Cheyenne Chupp, Volleyball 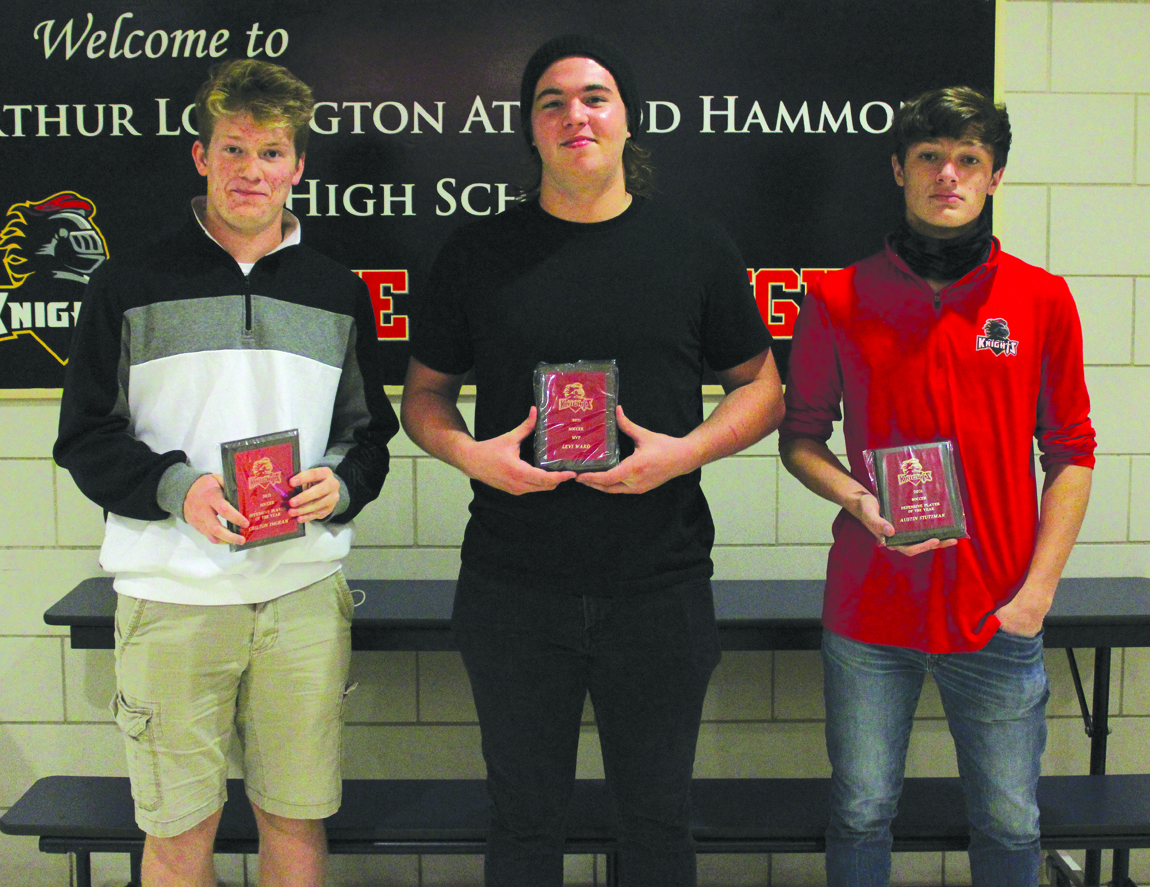 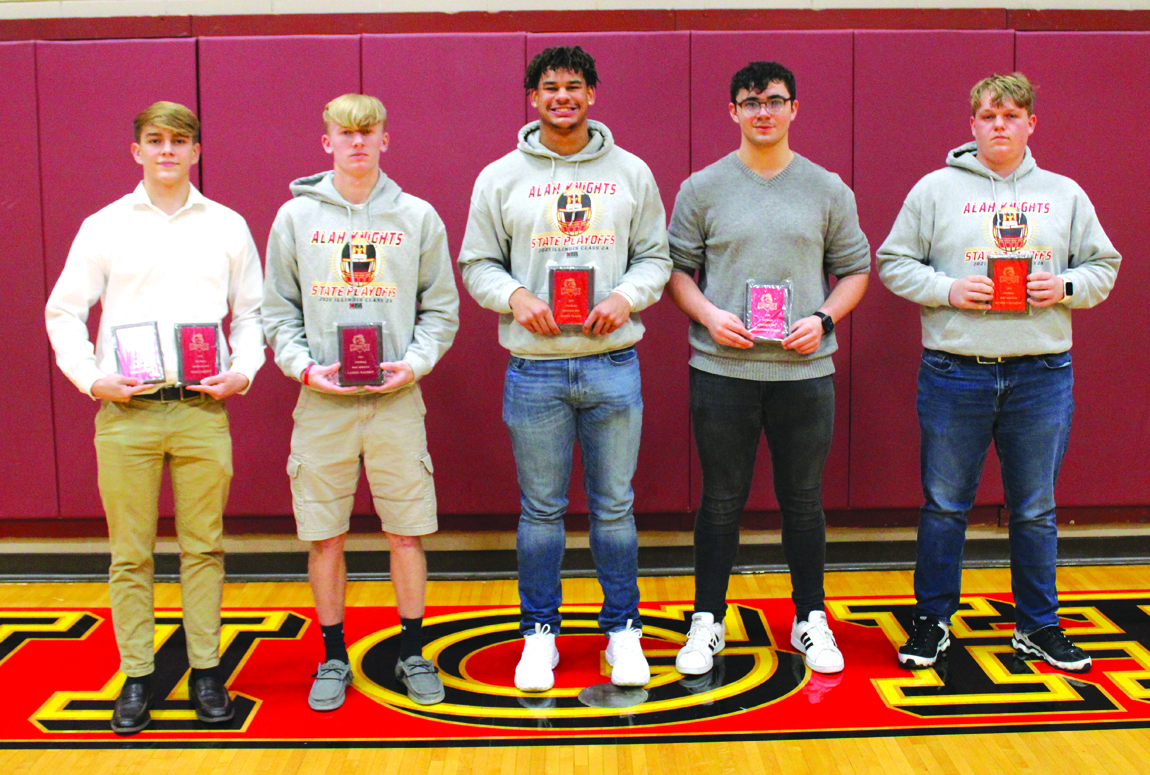 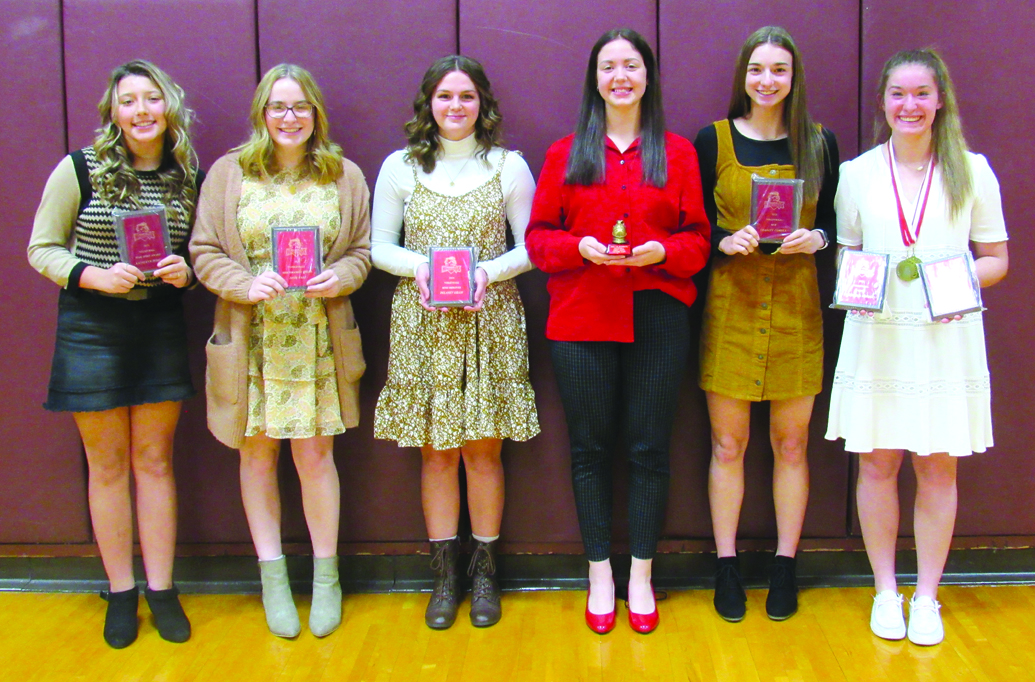 ALAH Athletic Director Nathan Seal opened the evening by talking about being thankful for what was a more typical sports season and that “we were all here because of love – the love of sport, the golf team repeating as LPC champs, football making the playoffs, soccer scoring lots of goals to beat Mt. Pulaski, volleyball winning the LPC consolation championship and cross country’s regional, sectional repeats and then state runner up trophy. Even if you don’t love sports you love someone that is participating or just love to cheer for the Knights.”

Mr. Seal then introduced Head Volleyball Coach Emily Crossman for her remarks on the season and presentation of the Volleyball Knights Award, which is given for each of the sports. Coach Crossman began with, “Are we glad to be playing in the fall? It was nice to have a regular season.” Volleyball had thirteen freshmen, one sophomore, eight juniors and four seniors. The fresh/soph team coached by Assistant Dana Tinkle saw incredible growth, the Jr. Varsity, coached by Assistant Coach Jessica Vanausdoll finished 11-7 and were a mix of new and veteran players, the Varsity finished 22-13, reaching their goal of a 20 win season, had many returnees and tremendous leadership. The teams were leaps and bounds better at the end. Coach Crossman said, “I’m the worst loser in the history of losers, but was so proud of the way the girls ended the season with the hard fought three set match loss to Monticello at Regional. I walked out of that gym with my head held high!”

Next sport up was football and Coach Ryan Jefferson, who echoed Coach Crossman’s statement of loving being back in the fall. He stated perseverance was the theme of their season and there was adversity along the way with quarantines and injuries. Starting 0-3 and still believing in making the post season was expressed in the post-game huddle after that third loss. “We reset after game 3, the players didn’t quit, pushed through and didn’t give up that belief.” Football, unlike most sports that are in the post season automatically, has to win at least five games to qualify and the Knights did just that to make it into the post season.

Coach Jefferson presented two Football Knight Awards based on the characteristics of heart, faith and class. Winners were Max Allen, a good listener, learner and focused and Maddix Stirrett who was a willing learner and gave great effort.

Cross Country Coach Lyle Dorjahn spoke next and began by saying he thought they could repeat the success of last year so they upped their schedule and competed each week with state ranked teams and top individuals. He mentioned the girls’ team stating that Emma Edwards, the one returnee from last year set a goal of making it to Sectional which she did by running her best time of the season at Regional. Emma Jones, junior and the “Freshmen Fillies who all ran their personal bests at Regional, their last race of the season.

Coach Dorjahn then talked about the boys’ team that won their third Regional in a row, their second Sectional in a row and finished second in the State Meet. All runners PRed at the State Meet and we were the only team with four runners under 16 minutes. “I’m pretty proud of what we have done.”

Coach Dorjahn gave the Cross Country Knight Award to Jace Green who took charge and ran some extra practices like a coach and if a practice didn’t go well, he called out the ones that needed it. He is an outstanding student and community leader.

Pat Lindstrom, Head Soccer Coach was up next. He talked about how he and his Assistant Greg Thorne had a mix of first timers and seasoned veterans. The first games were played while still learning skills but they made a good showing at games. The team showed courage and commitment paired with school and personal pride. “The last game was the most enjoyable and the nicest game.”

The last sport on the evening’s agenda was golf and Coach Brad McGill spoke on the, as he likes to call them, the ALAH/Arcola co-op, that had eleven golfers, seven of which were from ALAH and those seven were seven of the top eight on the team. They finished 18-1 in matches, won their third Lincoln Prairie Conference title in a row, had three All Conference selections, and Braden Kauffman and Aaron Seegmiller qualified for Sectional. “They have a bright future and I’m looking forward to next season, it almost makes wearing purple tolerable.”

Coach McGill then presented the Golf Knight Award by saying, “golf is a gentleman’s game, honor and character mean a lot, which fits the winner. He is a leader in the classroom, school community, and is a great kid!” The Knights Golf Award winner is Kade Herschberger.

Each team then went to designated areas in the school to present their individual team awards. Those are listed with the pictures of the recipients.