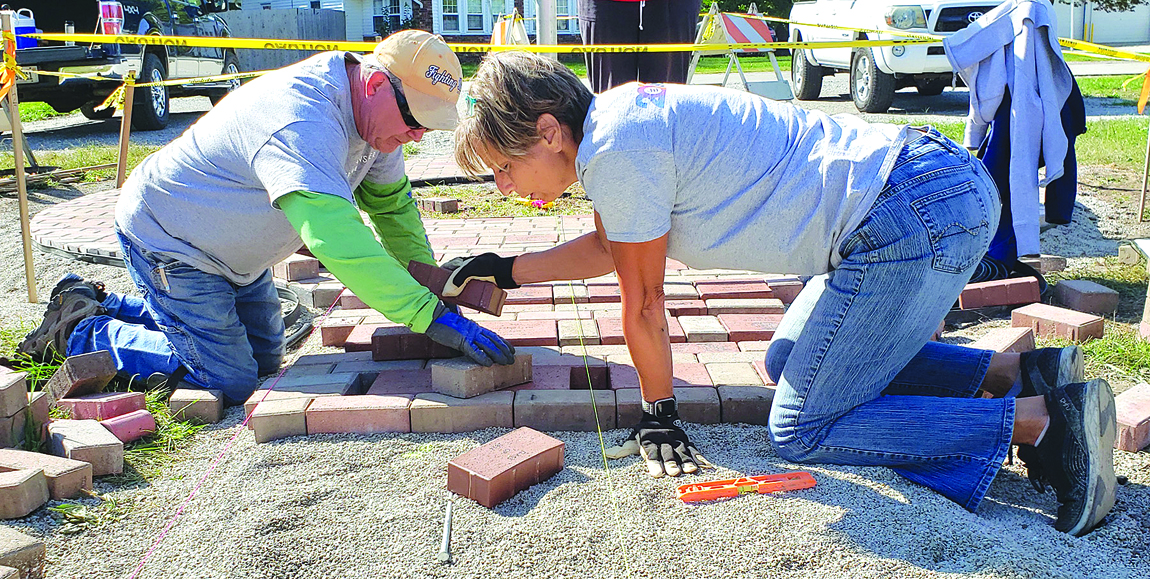 The call for volunteers to help build Rajah Memorial Park couldn’t have come at a better time for Dale and Jorena Hammel, high school sweethearts with a history of service to their alma mater.

As recent retirees — Dale, a maintenance mechanic at Pan Handle Eastern Pipeline for 42 years, and Jorena, a self-described “lunch lady” in the elementary school cafeteria for 27 — had plans to travel.

Their son and daughter are grown, and visits from their three grandchildren seem less frequent as social activities began competing for attention. They bought an RV. Then came the pandemic.

“COVID put the kibosh on a lot of things,” Dale said.

So, for the past two months Dale (Class of 1976) and Jorena (Class of 1977) have spent most of their mornings and Saturdays building a memory on a plot of land often referred to as the “Pea Patch,” a place where football players once practiced.

It’s located about a half a block east of where the Atwood-Hammond High School building and Boll Field once stood. The field — named after former superintendent Fred Boll — was where Dale earned the title of most valuable player his senior year, and where Jorena lead football fans in cheering the mighty Rajahs in hopes of victory.

Twenty years ago Dale and Jorena helped a group of volunteers upgrade the facility— a project that required moving the entire field 35 feet and adding new lighting, bleachers and goal posts. The field served another dozen years until sinking enrollment forced voters to consider consolidating the Atwood and Arthur districts in 2014. The referendum passed, the property sold and the high school building razed.

Now the field they once brought back to life produces corn or soybeans. Only a granite sign and memories survived.

Relocating the sign from storage to the Pea Patch took top priority for volunteer workers on their first day. From then on the Hammels were hooked. Their role came to fruition and they vowed to see it through to the end.

They spent evenings with family and friends improving the aesthetics around the sign’s base — an oval pit of white rocks with brick edging and two decorative boulders. The addition quickly became THE spot for visitors to pose for photographs.

Soon they found themselves in charge of laying the hundreds of brick pavers forming a path from the Magnolia Avenue parking lot, around an historic marker dedicated to Atwood native Kenneth L. “Tug” Wilson, to the veterans’ memorial section of the park.

Pavers engraved with the names of former students, teachers, designated classes and noted achievements intertwined with plain pavers for effect. Developing a pattern offered quite a challenge for a couple whose previous experience with brick consisted of constructing their own backyard patio.

Dale proved to be a quick learner working with landscaper Chuck Campbell, the owner of Amity Landscaping Group who is donating his labor for the project.

“There is a lot more prep work that I didn’t know about,” Dale said. “I must have asked him a hundred questions. I kept apologizing … but I learned.”

Chuck said he was amazed how quickly the Hammels caught on.

“The first day I showed them the ins and outs,” Chuck said. “He took off with it and honestly they’re doing a really good job. I would hire him in a heartbeat to be one of the crew working hardscapes.”

The circle represents a discus — an object in which Wilson excelled at throwing in athletic competition. Forming the brick around the historic marker was the most labor-intensive part of the path since many of the spacers had to be cut to form the curved edges.

For the most part, Dale and Jorena work as a team as only a married couple can. Jorena organized the brick pavers, stacking some in piles along the length of the path or laying out the engraved ones in readiness for Dale’s call. Dale cuts, aligns and sets the pavers according to a plan he keeps in his mind’s eye.

Jorena’s mind is on the same page. Knowing just what her husband needs and when he needs it. They keep others in check to ensure the rows are even and balanced.

“He can boss me, but he can’t boss other people,” Jorena said.

They politely refuse offers for help. It’s not that they don’t want any, they just don’t need it.

“I have it all in my head how we want it. I’m in a zone,” Dale said. “We work pretty good together.”

“Well, most of the time,” Jorena interjected.

It’s not uncommon for their work to be interrupted by visitors curious about their progress or wanting to see a particular paver. They take it all in stride, sometimes pausing their work to answer questions while other times continuing their work while talking.

Some visitors reminisce about the people whose names they recognize along the pathway. One woman even broke into tears when she viewed a paver dedicated in memory of her son, Jorena said.

Their work is challenging, sometimes frustrating, but still quite rewarding. Afterall it’s all for a good cause, they said.

“This project to me is all about Rajah spirit,” Jorena said. “As a former cheerleader and cheer coach, to raising our kids and working for the school district, I was always drawn to raising school spirit.”

NOTE: The Rajah Memorial Park committee is very appreciative of all those who have donated their time to help this project become a reality. This story is about two AHHS graduates who have dedicated more than 40 hours each.